The concept, called Agile Combat Employment (ACE), has been in the works for more than a year and was primarily intended to be used in potential hotspots around the globe, such as the Indo- Pacific, Middle East or even Nato’s Eastern flanks in Europe. But Russia’s invasion of Ukraine and concerns of a subsequent war involving Nato have now seen ACE accelerated and extended to within the UK, senior sources have confirmed.

It will be the first time since Britain declared war on Germany in 1939 that the RAF has drawn up plans to disperse fighter aircraft to different parts of the country.

The aim is to ensure elements of the RAF’s Quick Reaction Force will survive direct attacks on their bases. Eurofighter Typhoons based at RAF Lossiemouth in Moray protect the northern sector of the UK, while those at RAF Coningsby in Lincolnshire look after the southern sector. However other combat jets and larger aircraft will also be re-based in times of “imminent crisis”.

A trial in September will see Typhoons and F-35s based in Norfolk, Lincolnshire and Scotland scattered in small groupings and based discreetly on the outskirts of a select number of regional airports which have runways able to accommodate them.

ACE will also be used another way, by ensuring that regional airports are equipped with enough fuel and supplies to allow fighter jets to land there and carry out quick “operational turnarounds” before taking off again.

The concept was first made public in December by Air Vice-Marshal Ian Duguid who, as commanding officer of No 1 Group, is responsible for coordinating air assets to defend the UK in times of crisis.

“It doesn’t necessarily mean overseas. It might be to move aircraft from a main operating base to an airfield that doesn’t normally host fast jets, C-l 7s or A400s,” he said.

“Over the past 30 years we have consolidated our main operating bases and reduced the number we have. While concentrating our forces is more efficient, it also provides potential vulnerabilities.”

“Under ACE, airfields such as St Mawgan – run by a commercial contractor – or Leuchars, which is retained as a diversionary airfield for Quick Reaction Alert forces, could host F-3Ss.

“We are also working with some of the commercial regional airports to see if, in times of crisis, we could utilise their airfields or use them for refuelling and operational turnarounds.” 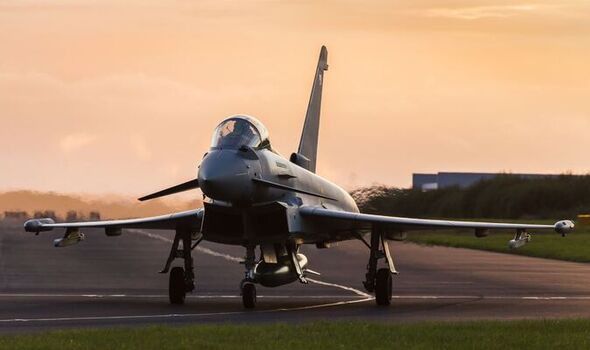 MOD civil servants have spent the last year visiting a selection of regional airports to ascertain how many aircraft and back-up facilities, plus ground crews, could be accommodated in an emergency.

Though battlefield turnarounds were commonly used in Iraq and Afghanistan, where RAF Chinooks or even army tankers would deliver aviation fuel to far-flung corners of the desert, the concept of temporary basing has required more planning to ensure that necessary apparatus will be in place before they are used.

According to sources, negotiations have been “complex” and have involved financial inducements to private airport operators.

“The reality is that precision weapons with the right amount of warhead can successfully target and destroy hardened aircraft shelters. We saw this in the first Gulf War. So effectively, they act as targets,” said former Air Commodore Andrew Lambert.

“Deploying fast jets and other types of aircraft to regional airports makes sense because it makes the problem of targeting these aircraft more difficult.”