Lead Brexit negotiator heard saying PM plans to wait until end of March to present choice between her deal or extension. 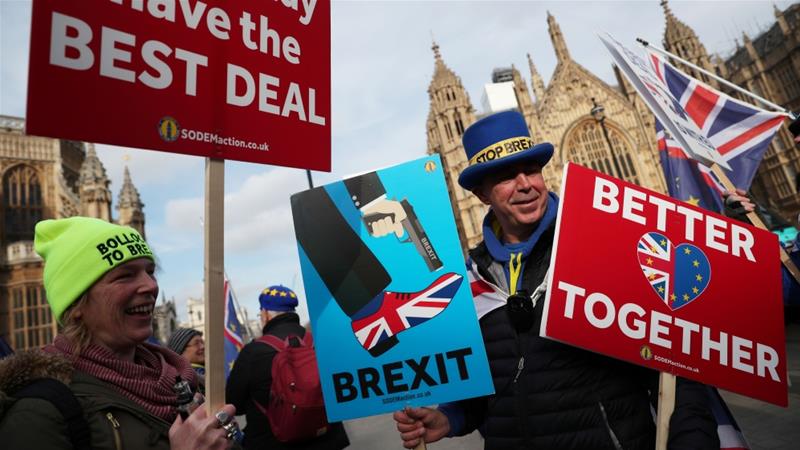 London, United Kingdom – British Prime Minister Theresa May faced scrutiny over her Brexit strategy on Wednesday, a day before MPs are due to vote on a motion to support her in renewed negotiations with the EU.

British broadcaster ITV reported comments overheard during a private conversation in a bar in Brussels, in which Britain’s lead Brexit negotiator Olly Robbins said May planned to wait until the end of March to present MPs with a choice between her deal or a long extension of the March 29 Brexit deadline.

Brexit secretary Stephen Barclay denied the claims, while the prime minister reiterated that the government’s position has not changed and that she remained committed to the March 29 deadline.

“We want to leave with a deal, and that’s what we are working for,” May said.

But critics including the leader of the main opposition Labour Party, Jeremy Corbyn, say the PM is running down the clock to “blackmail” MPs into voting for the deal she negotiated with Brussels over 18 painstaking months. Parliament overwhelmingly rejected it in a vote on January 15, marking an historic defeat for the prime minister.

The EU and the UK agreed last week to continue talks after MPs voted for May to go back to Brussels and renegotiate the backstop, the backup mechanism to avoid a hard border in the island of Ireland. This would only come into place should the EU and the UK fail to reach a comprehensive trade deal by the end of the transition period in December 2020.

Brussels has remained adamant that no changes would be made to the withdrawal agreement, while signalling some rewording of the political declaration may be possible.

During an update to MPs on Tuesday, the prime minister sought to buy more time for negotiations with Brussels, saying they should hold their nerve while she tries to make the changes to the backstop that the House of Commons asked her to deliver in a vote last month.

The prime minister said that if no deal is reached by February 26, the government will make a statement and table an amendable motion for MPs to vote on the following day.

Eurosceptic Conservative MPs want the backstop to be scrapped because they argue it will tie the UK to EU’s trading rules indefinitely.

But those MPs, who are part of the European Research Group (ERG) in favour of a harder Brexit, also fear that a long delay to the Article 50 deadline for leaving the EU could ultimately lead to the cancellation of Brexit.

The ERG looks likely to vote against May’s Brexit motion on Thursday, because “it rules out no deal and removes our negotiating leverage in Brussels”, according to the group’s vice chair Mark Francois.

While the motion on Thursday will be merely an expression of the House’s will without legal impact, losing it would show the EU how fragile the government’s majority is, weakening May’s argument for restarting negotiations.

“If they lose the vote tomorrow it shows the fact that it’s going to be very hard [for May] to keep all of her MPs on side, both for the vote [on the deal], and if the vote is passed, when we get to the implementing legislation that is needed to put the deal into UK law,” Maddy Thimont Jack, a researcher at the Institute for Government in London, told Al Jazeera.

The company had been awarded a 13.8 million British pounds ($17.8m) contract to run cross-Channel services in the event of disruption caused by a no-deal Brexit. That contract was axed last week after it emerged that the company had no ferries.

The government has not published the costs of revoking that contract, but the Labour leader pointed out that 800,000 pounds (one million dollars) have been spent on external consultants to assess contractors.

The UK’s Office for National Statistics (ONS) said on Monday that the economy has seen its weakest growth rate in six years amid Brexit uncertainty and a global economic slowdown.

On Wednesday, the ONS said consumer price index inflation fell to the lowest level since January 2017, which means a boost for household incomes. But it is also a sign of a slowdown in economic activity as uncertainty helps keeps prices down.