In a miracle off 49th Street, a complex where the food skewed corporate is suddenly a dining destination where chefs pursue their own ideas.

Nineteen restaurants or takeout spots have opened in Rockefeller Center since 2019.Credit…Karsten Moran for The New York Times

When the real-estate firm Tishman Speyer was trying to persuade chefs to join what was turning into a murderers’ row of restaurants at Rockefeller Center, it used many of the deal-sweeteners that are standard in the trade: lower rents, prime locations, help with construction costs.

But the firm was also pitching a dream. “You can make Rockefeller Center the epicenter of food for New York City,” one chef said he was told.

Even if you account for standard real-estate hyperbole, it’s still a pretty bold vision. For longer than anyone can remember, Rockefeller Center’s place in the conversation about dining in New York was essentially nonexistent. A lot of people ate there, but nobody talked about it.

In the past three years, 12 sit-down restaurants and seven other places to eat and drink have opened in Rockefeller Plaza and in the concourse, a network of underground corridors beneath it. Four more are due to arrive next year.

The former dining tenants in the complex were a mix of national chains in the concourse and competent but corporate operations at the ground level. The newcomers have more boutique sensibilities. The larger restaurants bear the distinct imprints of the chefs who run them, and while there are still some chains in the concourse, they tend to be small, local ones like Ace’s Pizza and Other Half Brewing. A similar change has been happening in the center’s retail spaces, which now hold several shops with a distinctly non-chain sensibility, like the record and book store Rough Trade.

It is too soon to tell how many of the new places to eat will turn out to be important, or even good. But in one respect they have already succeeded: People are talking about them. 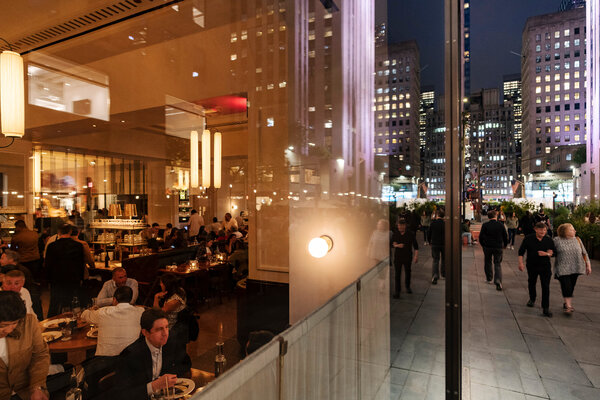 One of the less perceptive things you hear people say is that only tourists eat in Rockefeller Center. This is, in a word, wrong. Thousands of New Yorkers work in or pass through the complex every day. Some of us even look forward to it.

For starters, the architecture is one of the city’s most reliable thrills. “The greatest urban complex of the 20th century,” Elliot Willensky and Norval White called it in “The AIA Guide to New York City.” At Rockefeller Center we see all the elements that give New York its character — the density, the grid, the crowds, the volume of the buildings and their incredible heights. All this has been emphasized, so we feel its power. At the same time it’s been controlled, so we can actually enjoy it.

Two of the best spots to take it all in are new restaurants. Lodi, on the south side of Rockefeller Plaza, and Le Rock, on the north, are essentially the anchor tenants of Tishman Speyer’s overhaul. Lodi is small, precise and Italian. Le Rock is big, busy and French. Each moves like clockwork. Seated in either restaurant, you know you are in New York, and nowhere else.

The design of the plaza, with its sunken concourse leading to the skating rink and the gilded sculpture of Prometheus, funnels energy down to the below-ground spaces, too. So Jupiter, the Italian restaurant that opened last week just off the rink, sees nearly as much foot traffic as it would on a street corner in another part of town.

A downtown restaurant called King is home base for the three women who own Jupiter. King has about 120 seats and a tiny menu that changes each night. Whatever you get always seems to be sort of accidentally marvelous. Jupiter, with 25 more seats, is serving eight pastas, one risotto and a bunch of other stuff. On opening day I tried buckwheat noodles with potatoes, cabbage and fonduta, a dish whose richness I would have welcomed if I’d just come in from skiing the lower Alps, and a bowl of alphabet pasta — the letters spelled out Jupiter — in brodo that was blitzed with nutmeg. Whatever else Jupiter turns out to be, it is not standard expense-account Italian.

On the other side of the rink is NARO, owned by Ellia and Junghyun Park. At the horseshoe-shaped counter of their restaurant Atomix, the Parks skillfully use tasting menus to illuminate Korean culture. Can the same format work inside NARO’s glass box in the concourse? I felt a bit like a fish in a bowl as I sat through my 10-course, $195 dinner.

The chef Greg Baxtrom has taken another approach to concourse dining at Five Acres. The diners sit in the open behind a little railing while commuters stream past on either side. It sounds distracting, but I didn’t find it so. Given that Mr. Baxtrom likes to serve cocktails, oysters and s’mores under glass that’s lifted to reveal a swirl of smoke, the ones who are most distracted may turn out to be the commuters.

All the restaurant hounds I know are impressed that Tishman Speyer has caught most of these chefs and restaurateurs while they still have new things to say. This hasn’t always been the case with big developments in Manhattan. By the time Masa Takayama, Thomas Keller and Gray Kunz arrived at what used to be the Time Warner Center, they’d already made their major statements. I’d almost always rather eat in the restaurant of somebody who’s still got something to prove.

The new lineup makes some steps toward greater diversity, which is particularly noteworthy because Rockefeller Center is one of the most public squares in the world. Ms. Park said she had told her mother, back in South Korea, to look in her travel guides for pictures of Rockefeller Plaza so she could see the exact spot where her daughter now runs the plaza’s first Korean restaurant.

Somebody who traveled from Nigeria to see the Christmas tree can eat a rice bowl at FieldTrip, owned by the Black chef JJ Johnson. A young girl skating in the rink can look to her right and see a restaurant owned by three women.

Rockefeller Center is far from a United Nations of food, though. There are no restaurants representing China, India, Mexico, the Caribbean or most of the other major sources of immigrants to New York, with the exception of Italy, and the one Japanese restaurant, Blue Ribbon Sushi Bar, has non-Japanese owners. Tishman Speyer’s goal is to make Rockefeller Center feel more like the rest of New York. But immigrant-owned businesses contribute so much to the push and pull of the city’s street life that their omission from the center is bizarre.

What the new restaurants can do, and are doing already, is persuade diners to eat in Rockefeller Center on purpose. This s a fairly new phenomenon, but in the end what Tishman Speyer has built is not very different from what developers have tried to do at Gotham West Market, Hudson Yards, the Tin Building and other places. These planted clusters of eating establishments are the seeds developers scatter on the ground when they want to attract a new breed of bird. As the birds, we can be impressed by just how much food we’ve found even if we know something about the situation isn’t quite natural.