Russia and Syria call on the US to quit the war-torn country and to allow for the evacuation of refugees in Rukban. 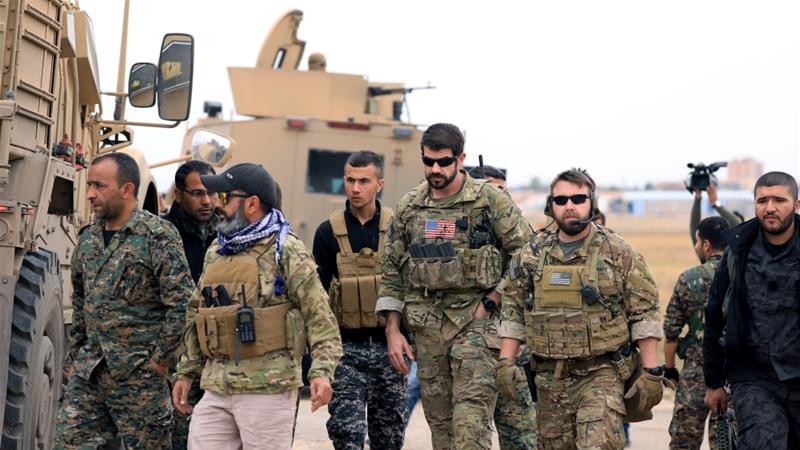 Russia and Syria have called on the United States to leave Syria and to allow people inside a refugee camp in the southeast of the country to be evacuated by Russian and Syrian forces.

A joint statement released on Wednesday by Russia’s Ministry of Defence said Russian and Syrian forces had prepared buses to relocate refugees at the camp in the Rukban area and would guarantee them safe passage so they could start new lives.

Tens of thousands of Syrian refugees are facing harsh living conditions at the Rukban camp near the Syria-Jordan border, despite Russian attempts to set up “humanitarian corridors” through the region last week.

“We also call on the United States, whose military units are on Syrian territory illegally, to leave the country,” the joint statement issued on Wednesday read.

The US had said earlier this month it would leave about 400 US troops split between two different regions of Syria, a reversal by US President Donald Trump that could pave the way for US allies to keep troops in Syria.

The move to keep a small fraction of the more than 2,000 US forces currently fighting the Islamic State of Iraq and the Levant (ISIL or ISIS) armed group in northeastern Syria came amid fierce criticism of Trump’s decision to withdraw all US soldiers from the war-torn country.

Critics have warned of a number of possible outcomes from a sudden withdrawal, including a Turkish attack on Kurdish-led Syrian Democratic Forces, Washington’s main ally in the fight against ISIL, as well as a resurgence of the armed group.

ISIL’s presence has been confined to the village of Baghouz in Deir Az Zor. Its fighters are on the brink of defeat, but a future resurgence of the group has become a concern among European states, who refuse to take back ISIL foreign fighters.

Trump announced the decision to keep troops in Syria after he spoke by phone to Turkish President Recep Tayyip Erdogan, who wants to set up a safe zone along the Turkey-Syria border.

Erdogan says the zone should be cleared of the US-backed Kurdish YPG militia, which Ankara considers a “terrorist” group tied to the outlawed Kurdistan Workers’ Party (PKK) inside its own borders.