Michael Calvey, the US founder of one of Russia’s biggest private equity firms, has been accused of fraud in Russia. 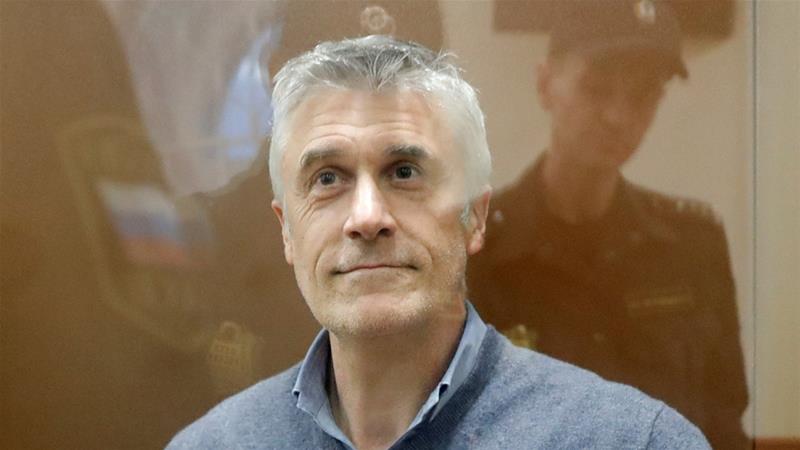 A Russian court has ordered Michael Calvey, the US founder of one of Russia’s biggest private equity firms accused of fraud, to be kept in custody until April 13.

Calvey, a senior partner at Baring Vostok and among Russia’s most prominent investors, was detained on Thursday along with other executives after investigators accused them of embezzling 2.5 billion roubles ($37.73m). Calvey denies the accusations.

On Friday, Moscow’s Basmanny court had ordered Calvey to be detained for 72 hours, but it said it would consider on Saturday if he should be kept in custody.

Judge Artur Karpov on Saturday extended the custody until April 13 after listening to the prosecutors, Calvey and his lawyers at Saturday’s hearing. A US embassy official was also present.

Explaining his decision, the judge said that Calvey was accused of a “serious” crime and could try to flee.

“Only detention in custody of suspected Calvey can promote the interests of justice,” Karpov said.

Baring Vostok has over $3.7bn of committed capital, according to its website. It has stakes in a number of Russian companies such as online video services and internet and cable TV providers.

The company was also an investor in Yandex, now Russia’s biggest internet search engine, during its build-up. Yandex, also known as Russia’s Google, currently has a market capitalisation of $10.3bn.

Prosecutors said on Friday that Calvey and other executives at his fund were suspected of embezzling the money by persuading shareholders in a Russian bank to accept a stake in another firm at an inflated price.

The alleged scam occurred in 2017 and involved Vostochny Bank, a mid-sized lender in which Baring Vostok has a controlling stake. It concerned the transfer of equity in Luxembourg-based International Financial Technology Group.

Calvey, speaking calmly from a locked glass-walled space inside the court on Saturday, said he disagreed with the prosecutor’s asset valuation but said he was “ready to cooperate with the investigation”.

“I’m not going to run,” he told the court via his lawyer who translated his speech into Russian.

BREAKING: Russian judge orders Mike Calvey kept in custody until April 13th. Based on my experience with the Russian criminal justice system, this is an ominous sign that his ordeal is just beginning. His business rivals want something big from him https://t.co/1xLDbqipEC

Russian Deputy Prime Minister Anton Siluanov told news agencies on Friday that the foreign investors, if found guilty, should expect to feel the full force of the law.

“If this is a fraud, what can I say: do not violate the law. If the facts are confirmed, no one can spare the perpetrators,” he said on the sidelines of an investment forum in the Black Sea resort of Sochi.

“Be it a foreigner or a Russian, there is no difference here.”

This is not the first time foreign investors have run afoul of the law in Russia.

American-born Bill Browder, once the biggest foreign investor in Russia, faced a string of criminal charges in 2008 after his lawyer Sergei Magnitsky revealed massive fraud by state officials.

Both were charged with tax fraud, but Magnitsky died in pre-trial detention of untreated health issues.

Browder meanwhile was sentenced in absentia to nine years in jail.