Seventeen years after it was born with the help of the CIA seed money, data-mining outfit Palantir Technologies is finally going public in the biggest Wall Street tech offering since last year’s debut of Slack and Uber.

Never profitable and dogged by ethical objections for assisting in the Trump administration’s deportation crackdown, Palantir has forged ahead with a direct listing of its stock, which is set to begin trading on Wednesday. In its stock offering, the company is not selling newly minted shares to raise money; it is simply listing existing shares for public trading.

The low-key strategy may not generate the enthusiasm many technology offerings do. But it is in character for a secretive company long reliant on spies, police and the military as customers – and whose founders are holding onto voting control of the company.

The big question for both investors and company management: Can Palantir successfully transition from a business built on the costly handholding of government customers to serving corporate customers at scale? The company is a hybrid provider of software and consulting services that often embeds its own engineers with clients.

Analysts say its future depends on selling multinationals its tools for gathering disparate data from an ever-expanding data universe and using artificial intelligence technology to find previously undetectable patterns. Those can theoretically guide strategic decisions and identify new markets much as they have aided in tracking rebel fighters and sorting military intelligence.

The company sets itself apart from most US technology providers, and just moved its headquarters to Denver from Silicon Valley. Palantir colours itself patriotic and belittles other tech firms that would not unquestionably support US dominance in war-fighting and intelligence.

But investors also have to reckon with the Peter Thiel factor.

The iconoclastic entrepreneur and PayPal co-founder endorsed President Donald Trump in 2016, worked on his transition team and holds the largest chunk of Palantir stock. Thiel already exerts tremendous power from the board of Facebook, which dominates global media and seeks to create a digital currency.

In its IPO prospectus, Palantir paints a dark picture of faltering government agencies and institutions in danger of collapse and ripe for rescue by a “central operating system” forged under Thiel’s auspices. As the offering is structured, Thiel will be the dominant voice among the Palantir co-founders who will retain voting control.

“Is that someone who you want deciding how a component of the [national] security apparatus is designed?” asked New York University business professor Scott Galloway. “If you believe that power corrupts and checks and balances are a good idea, this is just from the get-go a really bad idea.”

Earlier in September, BuzzFeed reported that Thiel hosted a known white nationalist, Kevin DeAnna, at a 2016 dinner party, citing emails it obtained and published whose authors refused to talk to the online news outlet. Thiel declined through a spokesman to discuss the report with The Associated Press news agency. Critics say he shares the blame for Facebook’s incomplete removal of toxic disinformation disseminated by the pro-Trump far-right fringe.

Then there are Palantir’s fundamentals, which Galloway considers lousy. The company has just 125 customers in 150 countries, including Airbus, Merck, Credit Suisse and the Danish National Police. Slightly less than half its 2019 revenues were from government agencies, and three clients – which Palantir did not name – accounted for almost a third of revenues.

“They’re massively unprofitable and they’ve never been able to figure it out,” Galloway said, noting that it took Google three years to earn a profit, and Amazon seven. Over a much longer span, Palantir has accumulated $3.8bn in losses, raised about $3bn and listed $200m in outstanding debt as of July 31. 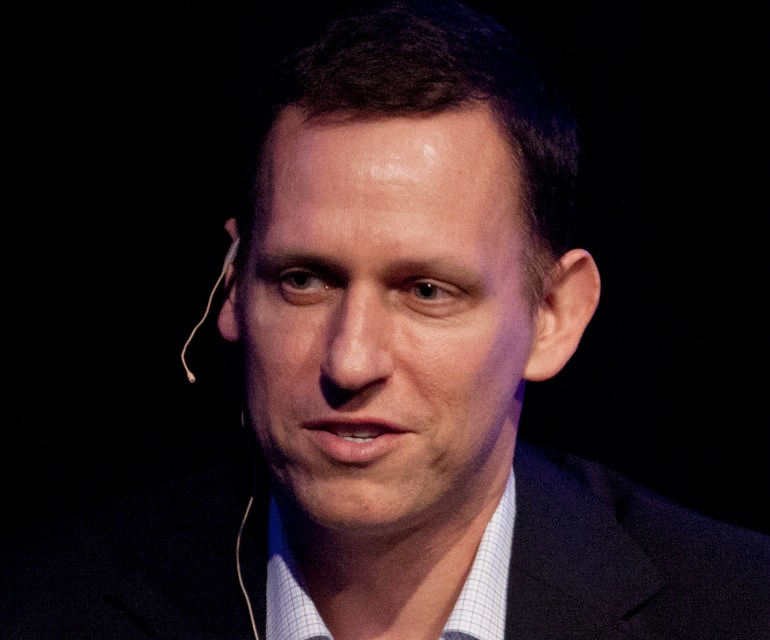 As the Palantir offering is structured, Peter Thiel will be the dominant voice among the Palantir co-founders who will retain voting control [File: Ben Margot/AP Photo]Palantir, named for the mystical all-seeing stones from Tolkien’s “Lord of The Rings”, has recently been deepening its relationship with Uncle Sam, including winning a modest contract early in the COVID-19 pandemic for helping the White House gather data on the coronavirus’s impact.

Senior emerging technology analyst Brendan Burke of Pitchbook says he is not worried that Thiel’s association with Trump will hurt the company if Trump loses the election.

“The political connections don’t appear to be the main driver of their recent substantial contract wins,” he said, although he noted that government contracts can be more volatile than corporate ones, where Palantir’s foothold is less firm.

Palantir offers two software platforms. Foundry is designed to link disparate and largely incompatible data sources into a central operating system. It is the company’s primary hope for broadening its business.

An earlier product, Gotham, has been used by defence and intelligence analysts and police departments to identify patterns deep within datasets. But the value of “predictive policing” tools developed with the platform have been questioned for their potential to unfairly target people of colour. The New Orleans and New York City police departments, once customers, have used it.

A 2017 research paper by University of Texas sociologist Sarah Brayne, who studied the Los Angeles Police Department’s use of Gotham, found the software could lead to a proliferation of unregulated personal data collected by police from commercial and law enforcement databases.

On Monday, Amnesty International issued a briefing that says Palantir is failing to conduct human rights due diligence around its contracts with Immigration and Customs Enforcement, calling it “deeply ironic” that the company crows about its determination not to work with regimes like China that abuse human rights.

Palantir’s ICE contracts involve the maintenance and improvement of two products used in deportation raids. One of them, its web-based Falcon tool, has enhanced data accessible to investigators “involving the illegal movement of people into, within, and out of the United States”, according to documents obtained by the AP, including court records, and by the nonprofit Electronic Privacy Information Center in a freedom-of-information request.

Palantir has acknowledged in its SEC filing that “unfavorable coverage in the media” and from social activists could hurt its business. It also says its contractual obligations might prevent it from being able to defend its actions publicly, although it recently named a former Wall Street Journal reporter to its board.

Related posts:
Recent Posts
Latest Posts
Covid 19 coronavirus: My life as a human guinea pig on Oxford vaccine trial
Donald Trump second term: ‘Aggressive’ Trump would intensify arms race with 2020 win
U.S. business activity picks up in October: IHS Markit
Nicola Sturgeon furious as she demands Rishi Sunak PAY UP on Covid – ‘NOT a PENNY so far!’
4 Key Biden Moments at the Final Debate
This website uses cookies to improve your user experience and to provide you with advertisements that are relevant to your interests. By continuing to browse the site you are agreeing to our use of cookies.Ok