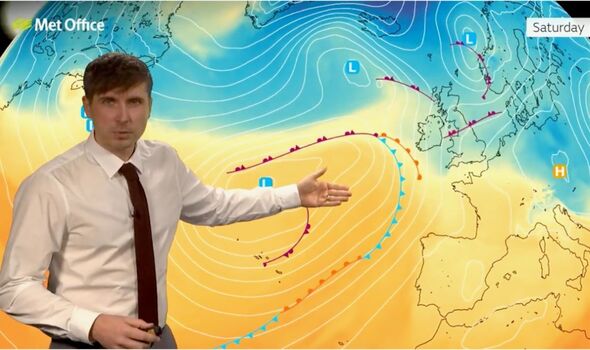 Bitter Arctic winds will give way to a freak temperature surge from the Atlantic today, after a late-weekend blizzard blitz.

Government forecasters have issued warnings for a near-nationwide whiteout dubbed the “nightmare before Christmas”.

The Met Office predicts up to half a foot of snow in parts of Scotland while independent forecasters warn feet-deep snow drifts could be whipped up by ‘hostile’ winds and blizzards.

But as “tropical” air moves into the country later today, it will boost temperatures with possible highs of 15C.

Jim Dale, meteorologist for British Weather Services, said: “It is going to feel unusually warm during the start of the week as mild air comes in from the southwest, and this will be even more remarkable given the very cold weather we have just had.

“This pulse of warm air is a superheater at this time of year and is going to bring a huge difference in temperatures which will last for about a day during the start of the new week.

“We could go from -10C to 15C in a matter of hours, a leap of 25C, so we are looking at a proper Jekyll and Hyde period of weather.

Meanwhile, all eyes are on a huge winter storm swirling in the Atlantic about to throw a tangle of snow-bearing weather fronts into Britain.

They will tussle with frigid air left across Britain by last week’s Troll from Trondheim Scandinavian blast unleashing a wintery torrent.

Northern regions are braced for heavy downpours and blizzards today while the rest of the country is on ice alert.

Freezing rain falling through chilled air onto still sub-zero roads and surfaces threaten to turn them into lethal ice rinks.
Mr Dale, author of “Weather Or Not?”, said: “In parts of the country, it is going to be the rain which is the problem, particularly freezing rain.

“Warm air aloft will push over cold air and the rain will fall through this before hitting still frozen surfaces and instantly freezing.

“This is going to bring very slippery and hazardous conditions through the day, particularly in the north.

“Sunday is really shaping up to be the nightmare before Christmas, and though it will turn milder afterwards, with those hostile winds, it will feel very cold.”

The Met Office has issued a raft of weather warnings through today including alerts for snow and ice across Scotland and northern England, and rain and ice across the rest of the country.

A more sever amber ice alert is in force until this evening across north-east England, north-west England, the west Midlands and Yorkshire and the Humber.

Met Office meteorologist Alex Burkill said: “It is going to turn much milder and that is true but before then we have got some wintry weather to get through this weekend.

“Cold air is over the UK but something much warmer is waiting out in the Atlantic and is associated with an area of low pressure.

“Milder warmer air will push its way across leading to temperatures rising quite drastically on Sunday.

“That frontal system will bring a significant amount of rain and as that rain pushes into the cold air we currently have over the UK it is going to bring some snow and some freezing rain and that is going to lead to some difficult, icy conditions which is why an amber ice warning has been issued.”

Weather models show temperatures heading towards the mid-teens on Monday although the mild conditions will quickly give way to another burst of cold.

Exacta Weather forecaster James Madden said: “As we head into Christmas week it tricky to predict exactly when and where the snow will hit.

“We are looking at several potential scenarios for the middle of next week, and all of them offer a quite cool and potentially wintry/snowy outlook.”