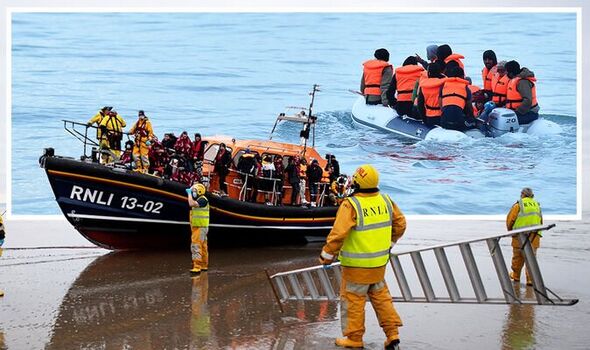 The Ministry of Defence on Sunday confirmed 20,000 people have made the crossing so far this year – up from 11,300 at the same point last year. Smugglers are believed to be taking advantage of the heatwave – and calmer conditions – to push migrants into tiny, unseaworthy boats.

There is also growing concern that people trafficking gangs are slashing prices and are exploiting social media site TikTok to advertise illegal entry to the UK via the English Channel.

Fierce competition between gangs saw various groups boasting they were the “best” operator for successful crossings, and stating “Rwanda has been cancelled”.

One group working with refugees in Calais said it heard people smugglers had lowered their prices, as rival groups tried to achieve dominance in the market.

However, after a series of legal challenges and a ruling from the European Court of Human Rights, the flight was cancelled.

The highest number of crossings in a single day was on November 11 last year, when 1,185 people arrived in the UK on small boats.

Leaked figures revealed that Albanians currently make up the largest ethnic group of those making the crossings. Migrants from the Balkan country now make up four in ten arrivals from northern France with 1,075 Albanians arriving in the UK aboard dinghies and small boats in the six weeks to July 12.