Voters required to use hand sanitiser and plastic gloves when casting ballots and maintain physical distance.

South Koreans began going to the polls on Wednesday to elect members of parliament under strict safety guidelines in one of the first national elections held amid the coronavirus pandemic.

About 14,000 polling stations were open at 6am (21:00 GMT on Tuesday) around the country after disinfection, and voters were required to wear a mask and have their temperature checked on arrival. Anyone whose temperature was higher than 37.5 Celsius (99.5 Fahrenheit) was led to a special booth.

All voters must use also hand sanitiser and plastic gloves when casting ballots and maintain 1-metre (3.2 feet) distance between each other.

The election is set to decide control of parliament, and shape President Moon Jae-in’s ability to push through his agenda in the final two years of his administration, including a minimum wage, policies aimed at creating jobs, and continued re-engagement with North Korea.

South Korea is one of the first countries in the world to hold a national election since the coronavirus epidemic began, with many others postponing votes.

Once grappling with the first large outbreak outside China, South Korea has largely managed to bring its cases under control without large disruptions thanks to a an enormous testing campaign and intensive contact tracing.

The Korea Centers for Disease Control and Prevention reported 27 new coronavirus cases on Wednesday, bringing the total infections to 10,591, with 225 deaths. The daily tally has hovered about 30 over the past week, most of them from overseas travellers.

But authorities have warned that infections could resurge at any time, calling for special caution on election day.

As of 9am on Wednesday (00:00 GMT), voter turnout was 8 percent, about 0.9 percentage points higher than in the last parliamentary election in 2016, according to the National Election Commission.

Among them were about 2,800 coronavirus patients, for whom the NEC allowed voting by mail and set up special polling stations..

More than 13,000 people in self-quarantine have registered to vote and will be allowed to do so for at least one hour after other voters leave at 6pm (09:00 GMT), according to Al Jazeera’s Rob McBride, who is reporting from Seoul.

He also noted that South Korea has never cancelled an election in its history. 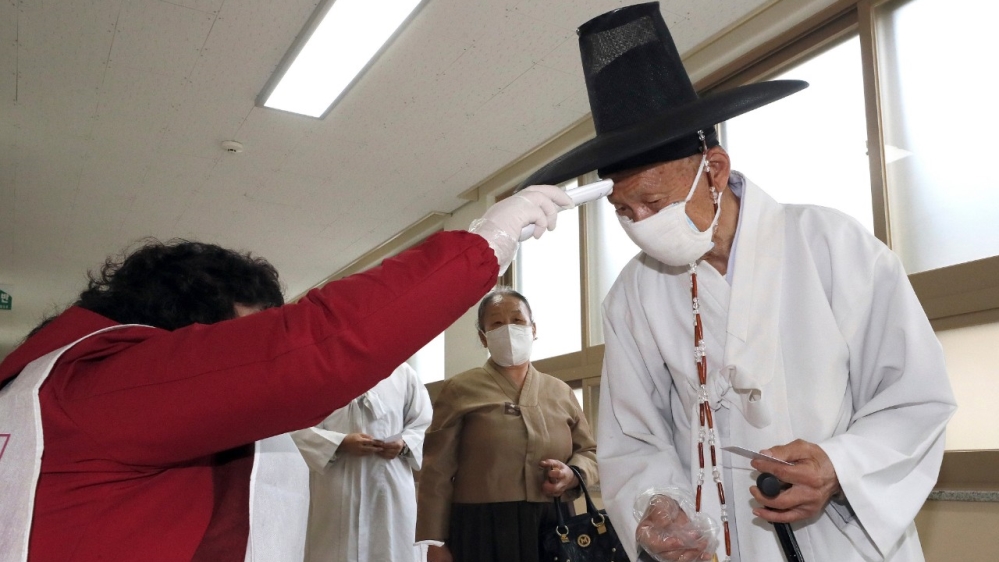 The election campaign has taken on a different look, with candidates wearing masks and bumping fists with supporters instead of shaking hands.

Just three years ago mass protests led to the removal of Moon’s predecessor, who is now in jail, but the virus has muted public displays of its dynamic democracy.

Things were more heated on the internet, which overflowed with bitter exchanges between supporters of Moon and his conservative opponents, who accuse the government of economic and foreign policy failures and botching the financial response to the epidemic.

Before the virus began absorbing public attention, Moon’s support was declining amid a sluggish job market, corruption scandals surrounding key political allies and his ambitious but fragile diplomacy with rival North Korea but the response to the outbreak has boosted his approval ratings.

A governing party victory will give Moon new impetus to drive his key domestic and foreign policies, including resuming inter-Korean cooperation and nudging the US and North Korea back to talks, said Duyeon Kim, a senior adviser at the Brussels-based International Crisis Group.

“If the opposition wins, Moon will likely become a lame duck, and party politics will quickly pivot to preparing for the 2022 presidential elections,” she said.