After socialist PM’s attempt to calm tensions with Catalonia, right wingers call him a traitor and demand elections. 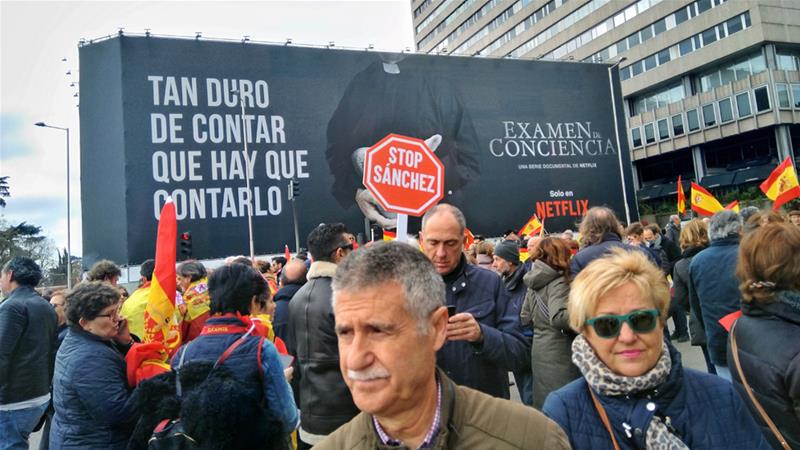 Madrid, Spain – Tens of thousands of Spaniards descended on Madrid to call for the end of the Socialist-led minority government and demanded that Catalan separatist leaders be put in prison.

The demonstration on Sunday, called by a coalition of three right-wing parties – the People’s Party (PP), Citizens and the VOX – draped Madrid’s Plaza De Colon in Spanish flags as protesters chanted slogans like “Long Live Spain!” and “Long Live the Police!”

The Spanish government estimated the number of demonstrators at 45,000, while organisers said 200,000 attended. Many held signs saying “Stop Sanchez”, a reference to Spanish Prime Minister Pedro Sanchez, who has overseen talks with Catalan separatists in recent months.

“Spain’s sovereignty isn’t a negotiation,” Marcos Villalobos, a student at Madrid’s Complutense University, told Al Jazeera at the protest. “We are one country.”

Many right-leaning Spaniards are alarmed by the willingness of the Spanish Socialist Party (PSOE) to negotiate with Catalan nationalist parties on regional self-determination before the high-profile trial of 12 Catalan leaders accused of rebellion, embezzlement and disobedience in relation to Catalonia’s failed 2017 independence bid.