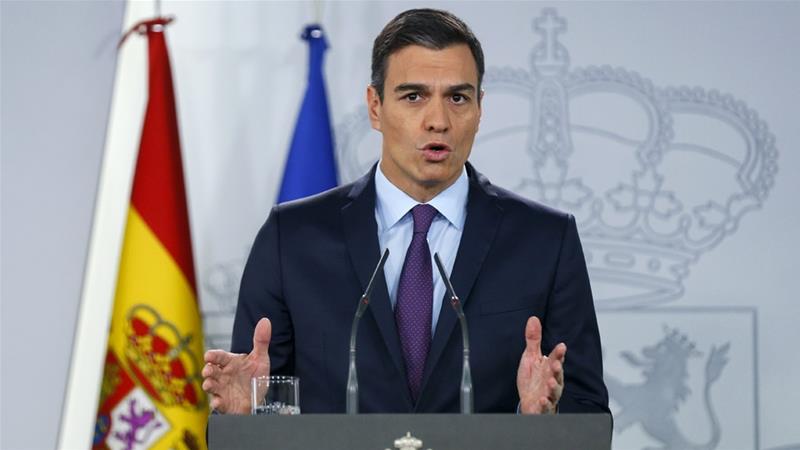 Madrid, Spain – Spain’s Pedro Sanchez is in Strasbourg to speak to the European Court of Human Rights (ECHR), making him the country’s first serving leader to do so.

Sanchez will visit both the ECHR and the Council of Europe on Thursday, where he is expected to “defend” the Spanish court system a week before 12 Catalan politicians go on trial.

Spanish media said Sanchez will assure the ECHR that “individual rights, public liberties and the rights of minorities are guaranteed” and will stress on Spain’s “respect of jurisprudence”.

The trial of the 12 Catalan leaders is due to begin in Spain’s capital Madrid on February 12.

The Catalan separatists have been charged with rebellion, disobedience and embezzlement of public funds during a failed independence bid in 2017 and face up to 25 years in jail.

One of the legal teams representing the jailed Catalan leaders confirmed to Al Jazeera on Thursday that they plan to appeal to the ECHR if the Spanish Supreme Court delivers a guilty verdict.

Indictments against those facing trial say they ignored the “grave” risk of violence while holding the October 1 referendum, which met a police crackdown described by rights groups as “excessive”.

In March last year, Spanish newspaper El Diario wrote that Pablo Llarena, the judge charged with investigating the Catalan referendum case, distorted “the reality of what occurred in Catalonia to extremes difficult to believe”.

Josep Costa, the first vice president of the Catalonia parliament, told Al Jazeera in an interview that the court’s “impartiality” regarding the trial must be taken into account.

“It’s a very conservative court,” Costa, who is also a professor of political science at Barcelona’s Universitat Pompeu Fabra, said. The judges “have political ties with the more conservative branch of the judiciary,” he said.

Spanish conservatives have taken a hardline approach towards Catalan nationalism.

During the push for independence, the government headed by former Prime Minister Mariano Rajoy from the conservative People’s Party, refused to speak with Catalan leaders about self-determination, suspended the region’s autonomy and called snap elections hoping to depose separatist leaders.

Many Catalans believe the Supreme Court will adopt a similar strategy during the trial: “They will have the opportunity to show their [judicial] independence which will confirm their conservative approach,” said Costa.

There is no legal precedent of the trial of the Catalan leaders in Spain’s democratic history. This makes the Supreme Court’s jurisdiction over the case open to interpretation.

But Ignacio Garcia Vitoria, assistant professor of constitutional law at Madrid’s Complutense University, told Al Jazeera that “there is no basis for a general criticism of the independence of judges in Spain”.

“We are a country completely in agreement with European standards,” he said.

Among the many concerns critics have is the issue of which court being competent to try the accused.

Apart from its Supreme Court, Spain also has an Audiencia Nacional, a special high court which has jurisdiction over the country as well as on cases of international crimes over which it has authority.

Both courts have held sessions concerning their jurisdiction over the trial of the 12 Catalan leaders, though the proceedings were eventually sent to the Supreme Court.

Lawyers for the Catalans say the Supreme Court trying the criminal case violates fundamental rights, since the court’s decision cannot be appealed within Spain and must be taken up with the ECHR.

“We will see how they are resolved and, where appropriate, the decision will be reviewed by the Constitutional Court and by the ECHR,” Garcia said.