You can make great soup in less than an hour! These recipes will get you there fast.

It’s soup season, is it not? I’ve been feeling that keenly this week, so I’ve got five recipes for you that fit the mood. (And here are even more: 16 favorites from The New York Times Food staff.)

The thing about soup is that it isn’t typically that fast to make. Even if you’re starting with quick-cooking ingredients, the flavors need some time to meld in the pot. But you can absolutely make good soup in less than an hour; the recipes below are proof of that. And you can make especially good soup in that time frame if you have homemade stock on hand.

Here’s the part where I try to persuade you to make your own stock. I use store-bought broth for soups like purées, which are thick with other ingredients and flavors. But if you want anything brothy — soup in which you really taste that broth — it’s worth it to make and freeze chicken or veggie stock once in a while. It’s just one of those things that are infinitely better than anything you can buy at the store. It’s also hands-off: Leave it on the stove for a few hours on a weekend morning, then strain it and freeze it in small servings.

OK, I know most of you won’t make stock. I get it. Everyone is busy. Promise me, then, that you’ll try one of the recipes below, which are straightforward to make and really good. And if you don’t even have the 45 minutes or the hour to make these, here are some superspeedy, non-soup recipes for the week.

Will I see you this weekend at The New York Times Food Festival? If you’re there, come say hello! If not, I hope you’ll email me at [email protected] with thoughts and requests. I read every note. 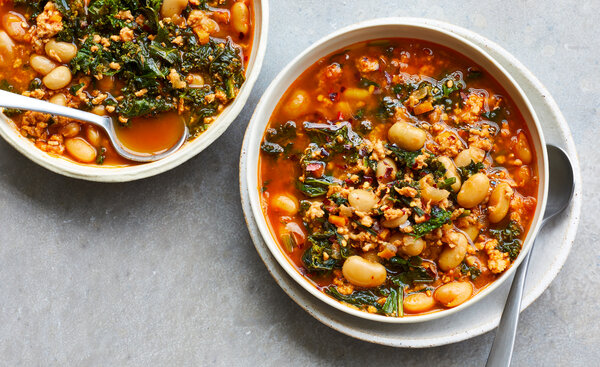 This soup checks a lot of boxes. It’s hearty but not heavy or dull, thanks to the lemon. It has a lot of greens, which makes it a full meal in a bowl. And within the space of an hour, you can be eating it. It’s also really delicious; it is, after all, a Melissa Clark recipe.

This Japanese dish is named for the clay pot — donabe — in which it’s traditionally made. But Kay Chun makes her version in a Dutch oven, for a meal that feeds four people but still delivers the same soul-warming pleasures of chicken and vegetables simmered in broth.

I love it when I have dumplings in the freezer. They’re perfect on their own, and so good in soup. This recipe from Hetty McKinnon, loosely inspired by wonton noodle soup, can be fully customized to your taste and, unlike many other soups, can be made quickly.

This is the right soup for this moment: Yewande Komolafe’s peanut and pumpkin soup, a fast-simmering version of peanut soups typical of West African cuisines. It’s made with pantry ingredients (pumpkin purée, peanut butter and coconut milk); habanero pepper adds the heat in the recipe’s name.

View all recipes in your weekly plan.