Criteria for the candidates includes having ‘mental strength’ and ‘excellent moral character’. 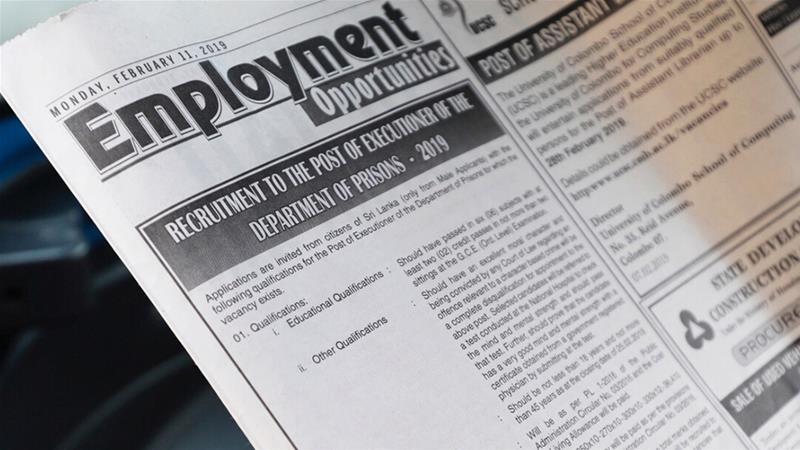 Sri Lanka has started advertising for hangmen after the president vowed to resume executions for the first time in four decades as part of a hardline anti-drugs crackdown inspired by the Philippines.

Candidates must have “mental strength” and “excellent moral character”, according to job ads placed by prison authorities to fill long-vacant positions.

There are two vacancies and only Sri Lankan men aged between 18 and 45 need apply.

Sri Lanka has not hanged any convicts since a moratorium on capital punishment was imposed in 1976, but President Maithripala Sirisena last week announced plans to resume hangings within two months.

Sirisena told parliament he was committed to bringing back the death penalty for drug offenders, after vowing a tougher line on spiralling narcotics-related crime.

Criminals in Sri Lanka are regularly given death sentences for murder, rape and drug-related crimes but until now their punishments have been routinely commuted to life in jail.

An executioner was at the main prison in Colombo until his retirement in 2014, but attempts to replace him failed. Three recruits quit within weeks with no work to do.

“Selected candidates will be referred to a test conducted at the National Hospital to check the mental strength,” according to the advertisement.

The chosen candidates will be offered a maximum salary of 36,410 rupees ($208) a month and will be eligible for a state pension.

The justice ministry has said it completed administrative procedures for the execution of five drug convicts.

However, Sirisena has yet to sign a death warrant of a condemned prisoner.