Storm Darcy is wreaking havoc across the UK after torrential downpours have caused flash floods. Travel services have been disrupted across the worst affected areas in the north of England and sandbags have been distributed to residents in parts of Yorkshire.

Storm Darcy, which was named by the Dutch Met Service KNMI on Friday, has reached the UK this afternoon and is set to bring cold, strong winds of up to 55mph.

The agency wrote: “The KNMI has given a name to the low-pressure area that will provide #snow on Sunday: #StormDarcy.

“We expect #snow, strong winds and temperatures below zero.”

Maps show Storm Darcy making its way over from Europe, with easterly winds hitting the UK from today. 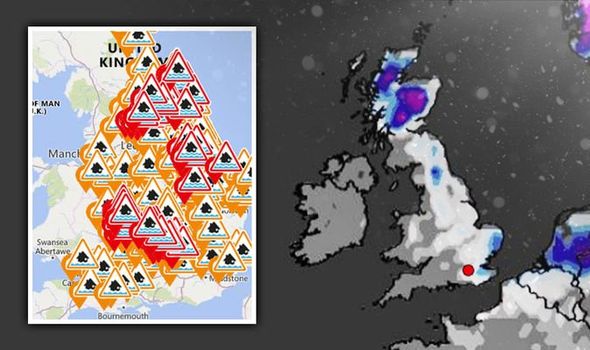 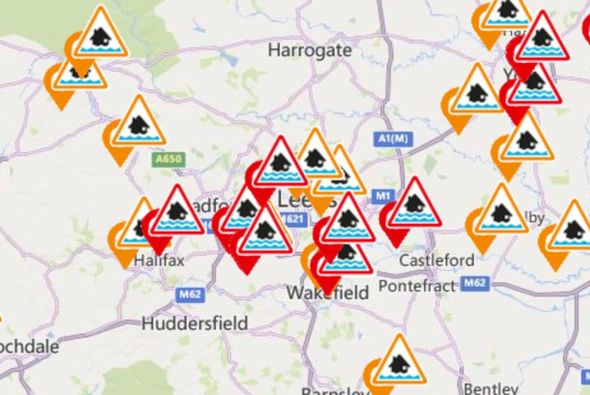 The Environment Agency has put 47 flood warnings in place up and down the UK, as river levels rise due to recent snow and rain.

Flood warnings mean immediate action is required, including moving objects to upstairs or to safety, moving pets and children and turning off supplies such as gas, water and electricity.

One street in Leeds has been submerged in floodwater, with further flooding expected as torrential rain comes down on the North Yorkshire city.

One resident in Leeds told LeedsLive: “There’s a new development being built just behind us. 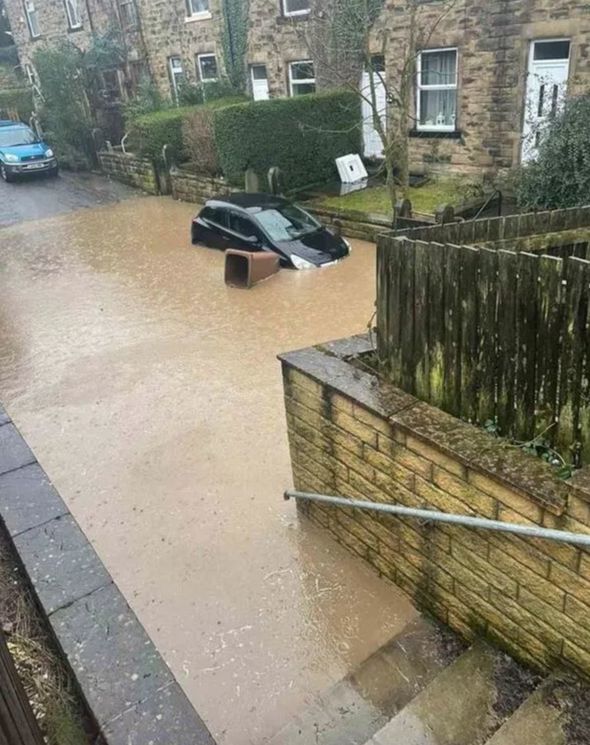 “Flooding has become a recent problem, with us flooding three times this year alone.

“On the new development, we can see a pile of earth slowly moving as the pressure moves it forward.

“We saw it collapse, and the corner house on our street was the first to go.

“The man who lives there has lived there for 20 years, and has never seen anything like this.”

Snow is also expected to hit the region later today as well as much of the rest of the UK, with the Met Office warning of snow for much of the UK’s east coast.

The northeast is bracing for cold air and snow showers as the Met Office has issued a snow and ice yellow warning, lasting until midnight on Sunday.

The Met Office says not all areas will see snow, with showers likely to miss some places altogether.

The East Midlands are also covered by the warning, with the Met Office saying “there is a potential that an extended period of more persistent snowfall could impact parts of the East Midlands overnight Saturday and through Sunday. 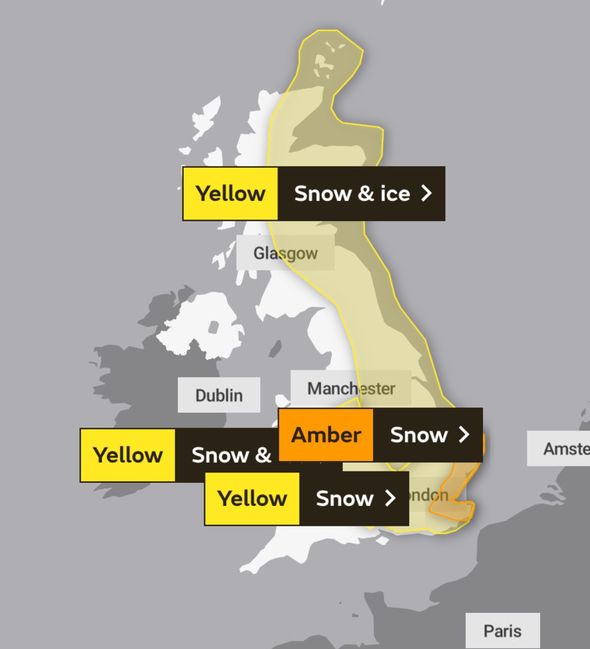 “This is all likely to bring areas of accumulating snow through the period with some icy stretches developing.”

Elsewhere, the south of England is expecting barrages of snow, with up to 30cm expected to fall in the Kent Downs.

Meteorologist Sarah Kent said: “It is a small chance but the threat is there, up to a foot of snow potentially combined with extremely strong easterly winds. Even inland in that area, gusting could be 45mph and higher than that on the coasts.

“This could lead to significant drifting of any lying snow and obviously blizzards for the snow coming past you for anyone who is attempting to travel.

“Sadly there will be people who have to make journeys for the emergency services and there are still lorries that have to go to the ports. It is going to be really disruptive.

“With that sort of snowfall, you would expect some roads to be closed or blocked by the drifting snow, and long delays or some cancellations of public transport.

“We are only looking at significant snowfall tomorrow across the south-east of England, so while we have these cold easterly winds it is not as widespread as the ‘beast from the east’ in 2018.

“Tomorrow’s events, the easterly winds, originate from Ukraine and the Black Sea – eastern Europe. The air will be cold but it will not be as bitingly cold as it was back in 2018.”