Suez Canal blocked after cargo ship Ever Given turns sideways

The Ever Given ship has been stuck in the essential trade route of the Suez Canal since Tuesday, as authorities tried hard to free the ship. But now, after five days, the ship has finally moved after authorities admitted “human error” could be to blame for the canal blockage. Egypt’s Suez Canal Authority Chief, Osama Rabie, confirmed efforts to dislodge the container ship had enabled its stern and rudder to move, but he said he couldn’t predict when Ever Given would be floating once more. Mr Rabie said he hoped it wouldn’t be necessary to resort to removing the hundreds of cargo containers on board the 200,000-tonne ship. 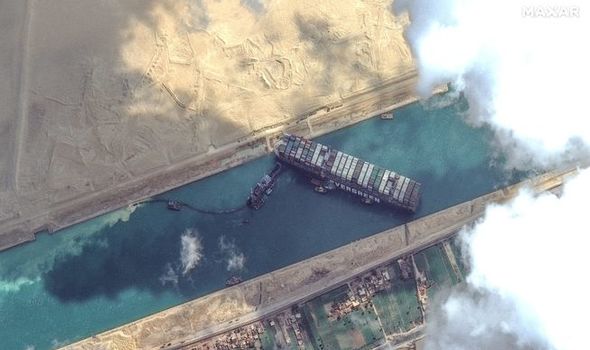 The Suez Canal Authority boss also revealed “strong winds and weather factors” weren’t the main reason for the ship getting stuck, instead putting it down to “technical or human errors”.

Two more attempts to free the 1,300-feet-long Ever Given will be made on Saturday after efforts failed on Friday.

High winds are understood to have blow the ship across the canal, which is very narrow in diameter, but Mr Rabie confirmed this wasn’t the main reason for the incident.

Sophisticated maritime tracking technology has been able to simulate the exact moment when the Ever Given carrier was wedged into the banks of the Suez Canal on March 23.