AHMEDABAD, India (Reuters) – Tens of thousands of people packed into a stadium in western India to welcome U.S. President Donald Trump on Monday as he began his first official visit to the country at a time when relations that have been buffeted by a trade dispute.

India and the United States have built close political and security ties and Trump’s two-day trip is a sign of their converging interests and a way to counter China’s rise as a superpower, officials say.

Trump landed in the western city of Ahmedabad, the political home of Indian Prime Minister Narendra Modi, to a raucous welcome, at the start of a two-day trip that will also take him to the Taj Mahal in Agra and Delhi for official meetings.

Modi embraced Trump he stepped off Air Force One, along with his wife, Melania.

“We are ready to come to India, we are on our way, we will be meeting everyone in a few hours,” Trump tweeted in the Hindi language before he landed.

Modi tweeted an old Indian saying in response: “The guest is God.”

Folk dancers carrying colorful umbrellas danced alongside the red carpet as drummers, trumpeters and other musicians performed on the airport grounds to welcome Trump and the U.S. delegation.

Hopes that the world’s two largest democracies could negotiate a “confidence building” deal in time for Trump’s arrival have faded in recent days as differences over agriculture, medical devices, digital trade and proposed new tariffs fester, according to business groups.

U.S. concerns that led last year to the suspension of India’s tariff-free access for some $5.6 billion in exports under the 1970s-era Generalized System of Preferences still remain, U.S. officials say.

But Modi, who has built a personal rapport with Trump, is pulling out the stops for Trump’s visit even though prospects for even a limited trade deal were slim.

The cavalcade’s route as it snaked through the city was thronged by tens of thousands of curious onlookers, keen to catch a glimpse of Trump and Modi.

The duo together garlanded an image of Indian independence hero Mahatma Gandhi after stopping briefly to visit his former home, Sabarmati Ashram,

Trump will be feted at a reception in a 110,000-seat cricket stadium in the city. A huge crowd filled the stadium, claimed to be the world’s biggest cricket ground. 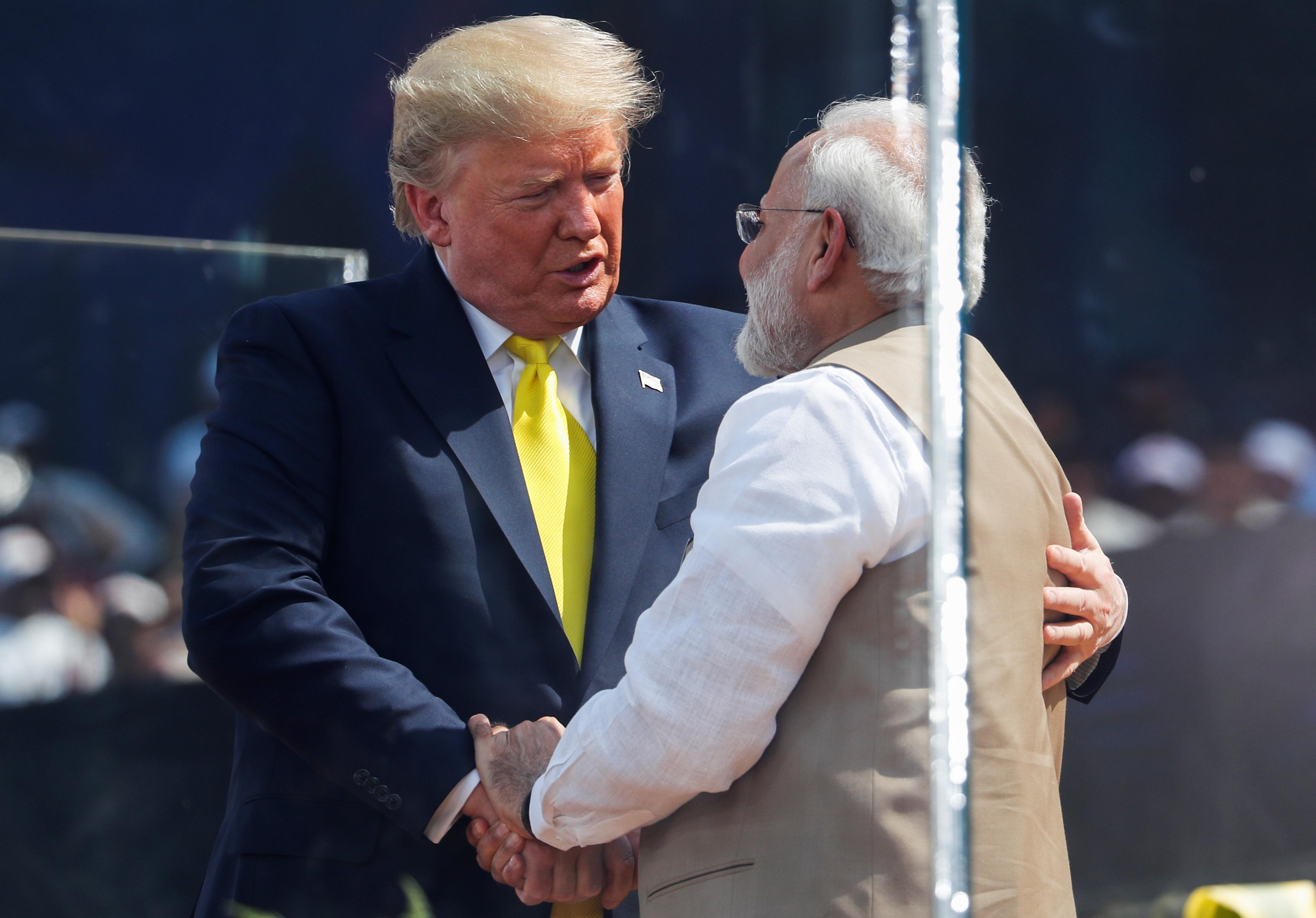 In the stadium, many people were wearing customized white hats saying “Namaste (Greetings) Trump”, while workers handed out thousands of cardboard masks of the U.S. president.

The rally will be a larger version of the “Howdy Modi” rally that Trump and Modi jointly appeared at in Houston to a jubilant crowd of 50,000 Indian Americans last year, where Trump likened Modi to Elvis Presley for his crowd-pulling power.

His entourage includes daughter Ivanka and son-in-law Jared Kushner besides members of his cabinet, including Commerce Secretary Wilbur Ross.

Trump, who seeks re-election in November, routinely gets the biggest audience of any candidate in the U.S. presidential race, ranging up to 20,000 or so, and he has been grudgingly admiring of Modi’s ability to get a bigger crowd than him.

Many roads were blocked off in Ahmedabad, shops shut and police stationed on rooftops and balconies. School children boarded buses bound for the stadium shouting “We love Trump.” Others were carrying Indian flags.

“I have been here since 7 a.m. I don’t know how many I have handed out,” said Durvin Prajapati, a 19-year-old volunteer who was standing on the stadium concourse with a box of two thousand Trump masks. “We like Trump: he is good for business”

From Ahmedabad, he heads to Agra for a sunset visit to the iconic Taj Mahal mausoleum, before landing in New Delhi for a summit with Indian officials and business leaders.

The two sides have been arguing over U.S. demands for access to India’s poultry and dairy markets, Indian price controls on medical devices such as stents and stringent local data storage rules that U.S. technology firms say will raise the cost of doing business. 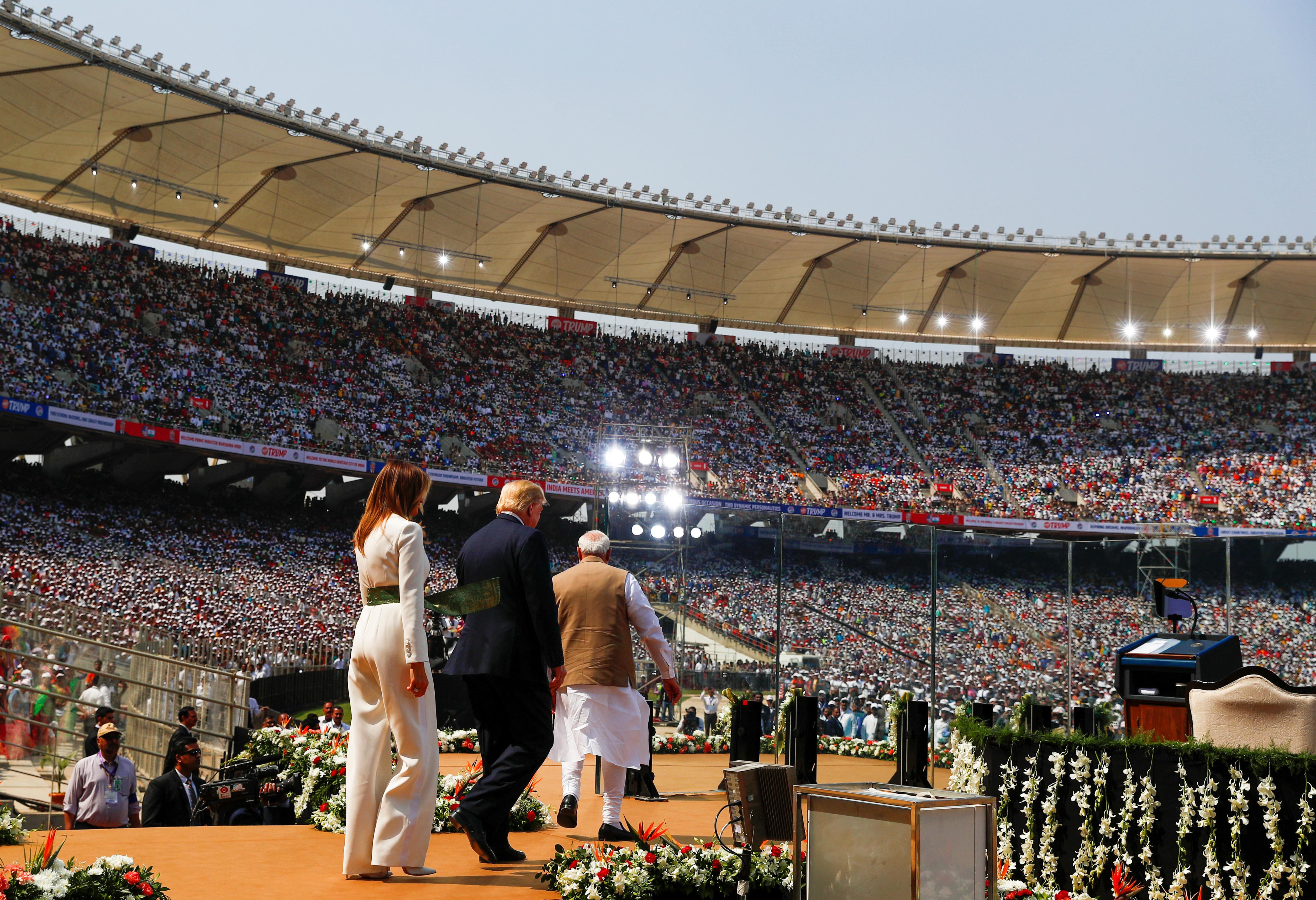 Modi’s government has sought restoration of trade concessions that Trump withdrew in 2019 and greater access to U.S. markets for its pharmaceutical and farm products.

The two countries are expected to announce defense deals including an Indian navy plan to buy helicopters from Lockheed Martin (LMT.N) worth $2.6 billion.