Terrified toddlers are shown being shouted at and chased by a daycare worker in a Halloween mask at their nursery in a disturbing video circulating on social media. The woman who apparently wore the Scream-style mask in the upsetting clip has reportedly been fired. She subsequently took to Facebook to issue an emotional video in which she claimed other staff at the school had put her up to it.

The footage, which has now apparently been deleted from Facebook, shows a woman shouting at the children, all of whom attend Lil’ Blessing Childcare in Hamilton, Mississippi.

At one point the woman looms over the screaming tots, getting inches away from their faces as she roars. Later, she is seen cornering three youngsters until one little boy runs away, at which point she chases and grabs him.

Another clip shows chlldren sitting in front of plates of food, covering their faces and crying in terror as the masked daycare worker screams. 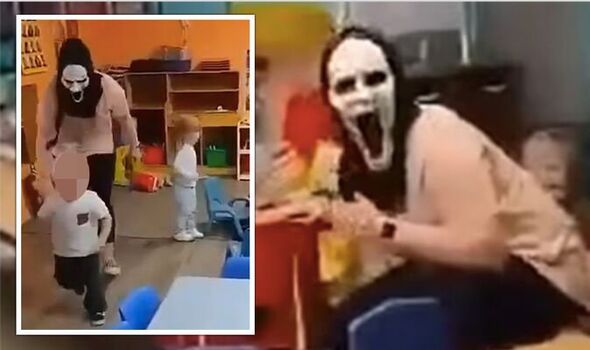 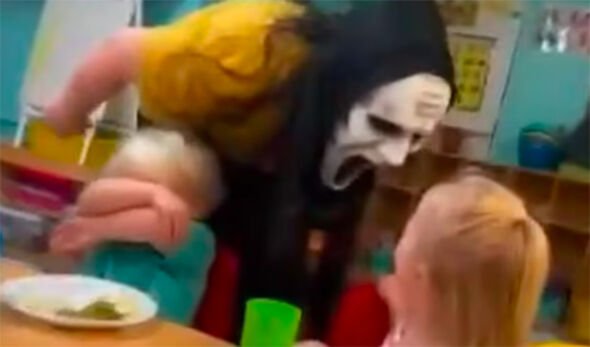 The woman behind the mask, referring to herself CeeCee, subsequently attempted to explain her actions in an emotional 19-minute clip uploaded to Facebook in the wake of losing her job.

In it, she said: “It wasn’t meant to harm anybody and it wasn’t ill-intentioned. The teachers asked me if I would do it or if they could use the mask to get their class to listen or clean up . . . I’m not a child abuser. I did not go in there at my own discretion. As in, I didn’t go in there with intentions to literally traumatise those children. I expected them to react the way they reacted when I did it.”

She explained: “Long story short, I bought the masks to scare her eventually and they were used inappropriately.

“But what you all didn’t see was after I had left the room, I took it off and I went back into the classroom… and I said ‘CeeCee got the monster. It’s not coming back.’ And they would hug me. I known those kids their whole life.”

CeeCee, 19, who had worked for Lil Blessing for four years, said the teachers had been aware of what she was doing although the owner had not. 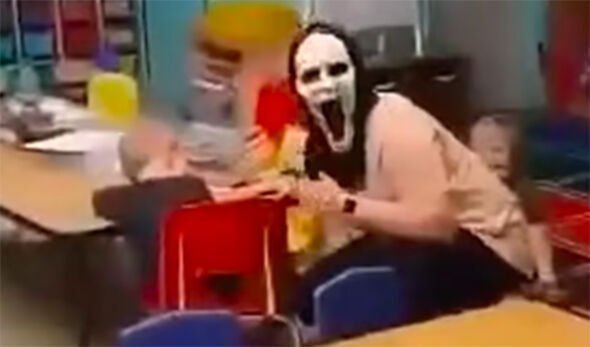 She added: “I do want to say an example, I know it seem the way that it does, but it doesn’t have to be that way.

“They knew it was me, and they had the reaction they did cause they’re children and that’s it.”

CeeCee’s remarks, which were uploaded not to her personal account but to that of somebody called Richard McCandless, were then reposted by Ashley Wood, whose son attended the day care.

Ms Wood sought to defend CeeCee, commenting: “There will be consequences but it’s not our place to judge anyone or even make someone feel so alone and down. It isn’t right. I don’t wish cece no bad on her. Was it wrong YES. I’m not saying it’s not and she knows that’s – and is what she is trying to get thru to everyone she is truly sorry.”

DON’T MISS
Poll shows voters trust Labour more than Truss on the economy [REVEAL]
Truss avoids crash landing as PM as she vows to go for growth [INSIGHT]
Should the UK rejoin EU, join Macron’s group or stay away? [REACT] 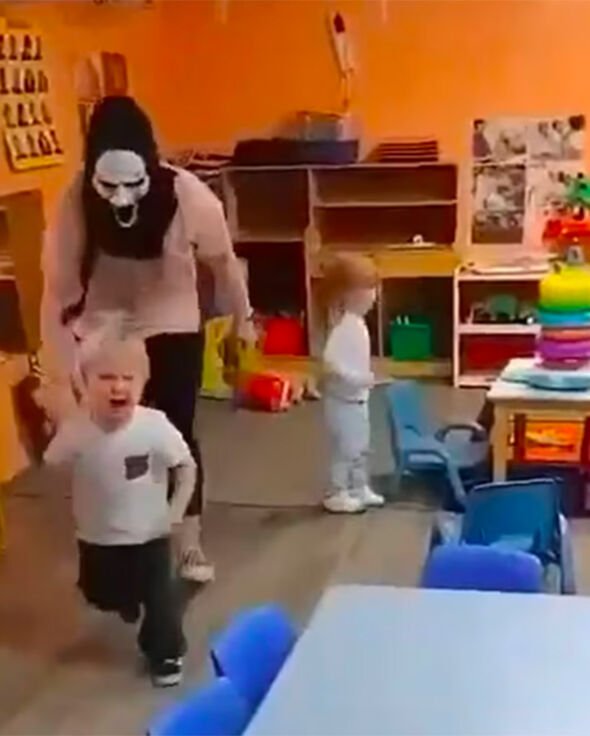 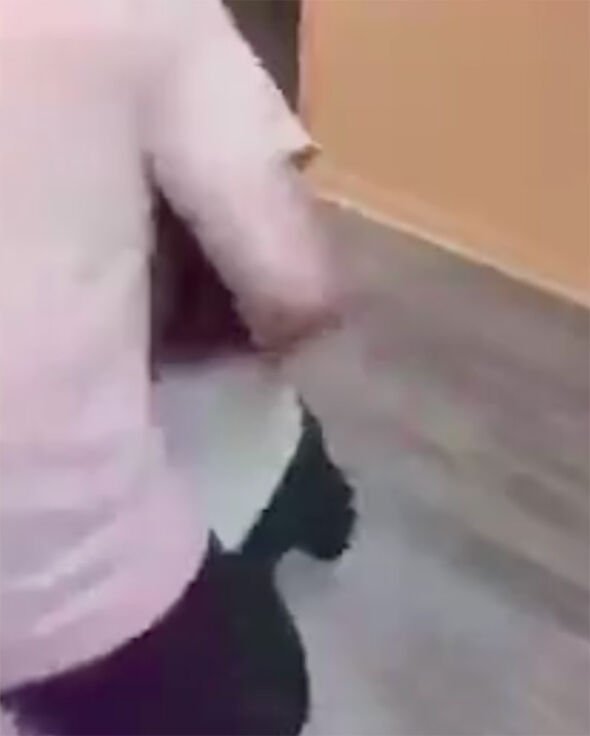 Another Facebook user, Jennifer Kayla Newman, also took to site, posting a lengthy message in which she claimed to have recorded the videos in a bid to show parents the behaviour of her coworkers.

She claimed: “A couple of weeks ago some girls at the daycare bought Halloween masks to scare the kids, they did it and I never got it on video.

“When I heard she was going to do it again, I recorded to get the proof and then the video was sent to parents to show them how their child was being treated.

Parents of children in the class told US broadcaster ABC of their deep unhappiness at the situation. 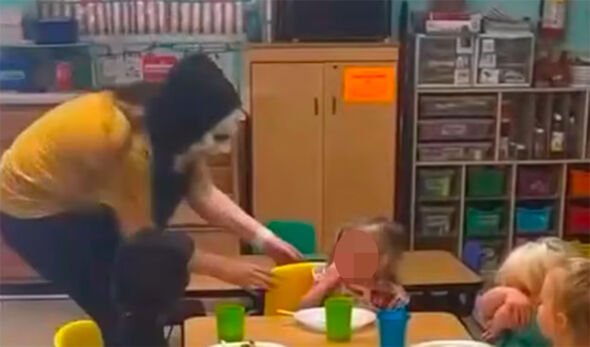 The mother of one of the little boys involved said: “It’s hard as a parent to console something that’s happening in their mind, in their brain, it’s not something you can physically help heal.”

The father of another little girl added: “We’ve never seen that type of fear in her eyes before.”

In a lengthy post shared on the Facebook page of Moore County, Ms Sheriff’s Department, Sheriff Kevin Crook said: “As a dad and as someone who has great compassion for those who can’t defend themselves, I admit it was very hard to watch these videos today; and my initial reaction was the same as most anyone else I would think…’they deserve to be charged’.

“It made me sick at my stomach to think of the terror those kids were enduring. It still does.

“My heart and prayers go out to the parents who are dealing with these same emotions right now. We have a 17-year-old, a 13-year-old and a two-year-old in our home right now, so I get it, trust me. 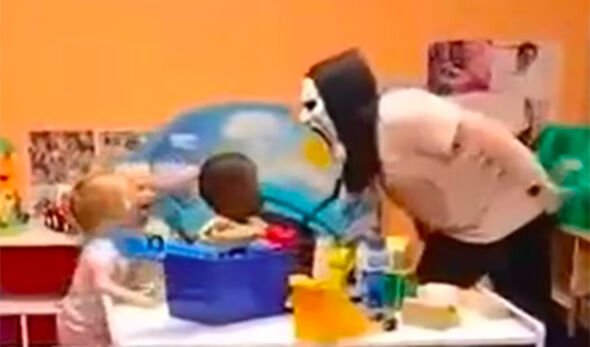 “I am thankful that the only lashing out over this has been verbal and in print. I pray that it remains that way. I pray for peace for all involved. I am quite sure that those responsible are feeling the full weight of their error in judgment right now.

“In the meantime, Our Department is looking into the matter, and we will do a full investigation. The kids are safe, and this has been brought to light: that is the main thing everyone should be thankful for today!”

Mr Crook added: “Our Investigators do not bring charges based solely on our watching of a video, and we don’t encourage others to run down to Justice Court and start filing away. We need time to dig into a situation and find out what the real facts of the case are… all of them. This is what we will be doing.

“If those parents wishing to bring charges will give us that time, we will lay out the options that we, our County Prosecutor, and our District Attorney think best fit the situation, and you can move forward with those.

“I would like to be able to meet with all of those planning to do that in the near future. Having said that, we can not stop anyone from filing what they see fit to file without our help. This is how we plan to proceed. Please join us in praying for our community.”