Your favorite dessert may have a not-so-secret ingredient.

The pistachio Bundt cake at Claud in the East Village of Manhattan relies on a nostalgic ingredient for its familiar flavor and airy texture: boxed pudding mix.Credit…Colin Clark for The New York Times

The pistachio Bundt cake at Claud has a secret.

It’s one that Joshua Pinsky, the chef, has been hesitant to share. After all, this dessert at his French-influenced restaurant in the East Village may be one of the best in New York City right now, with its plush crumb, candy bar-like flavor and mint-green hue.

In trying to recreate a dessert from his childhood, Mr. Pinsky arrived at the same conclusion as countless other professional bakers. Instant pudding is more than just a century-old convenience food for busy home cooks. It’s how chefs make soft, spongy cakes that remind diners of their favorite childhood desserts.

He first developed the recipe in 2015 as the chef of the now-closed Korean- and Italian-inspired restaurant Momofuku Nishi. Initially, he followed a recipe from his mother, Kathy Pinsky: a combination of pistachio pudding mix and boxed vanilla cake. It was too sweet. Then, he made it entirely from scratch.

“It didn’t have the same, I hate to say it, artificialness to it,” he said.

Eventually, he replaced the cake mix with a simple chiffon cake batter and added salt, a lime glaze and whipped ricotta. But the boxed instant pudding remained.

He felt some embarrassment for his semi-homemade technique — so much so that he would hide the pudding boxes in the kitchen.

At Claud, which opened last summer, Mr. Pinsky is more confident in his approach: Give people the flavors they remember, but with more finesse.

“Having that touch of something synthetic, that’s what reminds you of every cake you ever had growing up,” he said.

It’s a strategy that sells. The banana pudding at Magnolia Bakery, which was founded in New York City in 1996 and has locations around the world, is little more than sweetened condensed milk, heavy cream, bananas, Nilla wafers and instant vanilla pudding mix. The dessert, which accounts for 30 percent of the company’s sales, has given rise to dozens of copycat versions and even comes in body wash form.

When Bobbie Lloyd took over as chief executive of Magnolia Bakery in 2006, she sought out new ingredient sources for some recipes. There was room for improvement, she thought, with one exception. “The banana pudding is the one recipe I did not touch,” she said.

“There is something about the flavor of banana pudding with Jell-O instant vanilla pudding that you can’t replicate with a homemade pastry cream.”

First introduced by a brand called My-T-Fine in 1918, instant pudding mix — whose key ingredients are sugar and cornstarch — was a product of the post-World War I manufacturing boom, according to the 2012 book, “Pudding: A Global History” by Jeri Quinzio. The rise of supermarkets in the U.S. and the growing number of women entering the work force drove the product’s popularity as a shortcut dessert. A 1941 advertisement for Jell-O instant pudding mix — which debuted in the 1930s — in Ladies’ Home Journal claimed it could recreate “Grandma’s creamy, deep-flavored pudding, quick as a scat.”

Home cooks helped popularize using the mixes in desserts other than pudding, like cakes and trifles, said Ms. Goldstein, the food historian. Community cookbooks from the 1960s to the 1990s contain recipes for lemon cake, cheesecake and blitz torte, all made with instant pudding. Some cooks swear by pudding for softer, chewier chocolate chip cookies.

These days, instant pudding mix is not flying off store shelves. Sales of gelatin and pudding mixes declined by 5.9 percent in December 2022 compared with the year prior, according to IRI, a market research firm. Baking cookbooks extolling the values of convenience foods aren’t as common anymore, said Darra Goldstein, a food historian and cookbook author.

“I feel like the ethos is more from-scratch baking and trying to go back to pure flavors,” she said.

But people more often crave familiar flavors, not pure ones, and instant pudding helped shape American palates, said Stella Parks, the author of “BraveTart: Iconic American Desserts.” “What is the flavor of butterscotch?” she said. “Butterscotch pudding is going to hit that on the nose for people. It would be their first and only exposure to a flavor like that.”

Ingredients like pistachio are more accessible in pudding form, she added.

When added to a baked good, pudding mix can also improve the texture. The sugar helps desserts retain moisture, while the cornstarch makes for a taller rise in the oven, Ms. Parks said.

The food writer Esteban Castillo realized this when he tried to develop a recipe for key lime Bundt cake similar to the one sold by the bakery chain Nothing Bundt Cakes for his second cookbook, “Chicano Bakes.”

“I tried doing so many things, like incorporating a bunch of lemon zest and lime juice,” he said. The flavor wasn’t quite right, and the texture wasn’t as bouncy or tender as he wanted. The solution? Instant lemon pudding mix. “It just keeps it really nice and moist without having to use a soak.” (Nothing Bundt Cakes does not include instant pudding mix in its confections.) 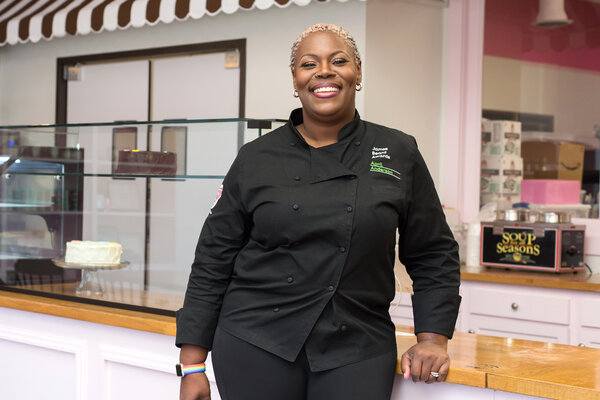 April Anderson, a founder of Good Cakes and Bakes in Detroit, has incorporated pudding mix into a variety of the bakery’s offerings, like cheesecake, banana pudding and her best-selling rum cake — a recipe inspired by her mother’s version, which always included instant vanilla pudding.

“Whenever someone wants something that is light and fluffy, I always use a Jell-O mix,” she said.

But she’s not hiding the boxes. She tells customers, proudly, that the mix is key to some of her cakes.

Instant pudding is an American staple, she said. Why would she keep it a secret?