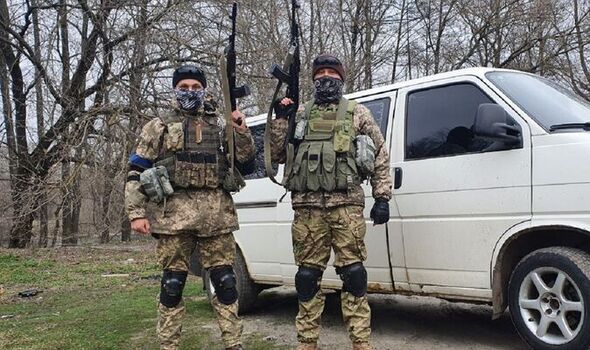 “We were somewhat prepared and had packed some things,” he said. So when his brother called him in the early hours of 24 February, Oleksy sprang into action, and within the space of two hours they had sent their family members fleeing south in their cars. “I believe it was by the grace of God when the night before the idea just came to me to fill up the family car with petrol”, he said.

Family members travelled first to the relative safety Central Ukraine, then took three days getting to

Lviv, where they spent another three days under arduous conditions waiting to cross the border. Once in Poland, they arrived relatively quickly in Warsaw where they were lucky enough to have relatives.

With his family out of harm’s way, Oleksy and his brother headed immediately to the city’s

Headquarters of Territorial Defense, which, unlike Oleksy, was less prepared for war.

Although formed a year earlier, the local Territorial Defense only had 20 contract soldiers and little to no equipment for new recruits.

“Just uniforms without boots, much less helmets and flak jackets.”

When Oleksy and his brother arrived, there were already 100 local men queuing up to join. Soon the queue increased to about 300, he said.

Eventually, weapons started arriving and were immediately distributed off the backs of trucks. “I was given a Kalashnikov before I received a pair of trousers.” Nevertheless, ammunition was in short supply, with each recruit given only two magazines of thirty rounds each.

The city itself, with a population of around 250,000 and located only 30 miles from the Russian border, was equally unprepared for the Russian attack.

“I live not far from an airfield, but the air raid sirens were barely audible, even from the street.”

Oleksy had no prior military experience and had never before handled firearms. “Some people are bornto be soldiers. I felt a mixture of fear and a desire for the whole thing to end as quickly as possible … I had no desire to kill anyone.”

After being assigned to units, the volunteers created a perimeter around the HQ of the Territorial Defense HQ, while Russian troops in armored vehicles passed through the town on another street.

“They acted like they were in a parade,” he said, “even stopping at red lights,” said Oleksy, noting that the suspicion among the volunteers was that a police collaborator had told the Russians there would be no resistance.

But the parade didn’t last for long. Soon a group of about a dozen regular Ukrainian paratroopers, arrived and led the 300 Territorial Defense volunteers to an old artillery training ground on the edge of the city, from where they started shelling the Russian column.

The column, which consisted of an armored personnel carrier, a Kamaz truck carrying about 20 Russian soldiers, a mobile Howitzer, a communications vehicle and fuel truck, was completed decimated by the attack, he said.

Other Russian forces outside the town continued on their way to Kyiv, their main objective, leaving a residual force to encircle the city. “They didn’t come in and wouldn’t let us go out.”

By February 25th, the Territorial Defense volunteers had received additional ammunition taken from the destroyed Russian convoy but were still hunkered down near the training ground with the Ukrainian paratroopers.

Suddenly the men received word from commanders that they were to leave the training ground in small squads of five or so to avoid expected artillery fire from Russian forces.

Oleksy went home, then joined the other volunteers the next morning of 26 February in a now completely empty city centre. Fear of sniper fire was widespread. Instead, they eventually found themselves under friendly fire from Sumy police units who had mistaken them for remnants of the Russian column.

Shortly thereafter, Oleksy recalls, he was finally given a helmet – by an old man who had approached him on the street, explaining that he had two sons who used to serve in the army but who had left the country years earlier.

From this point, Oleksy says, one day started looking pretty much like another. The Russians started shelling and hit two houses on the outskirts, much as they had done elsewhere. Russian aviation attempted to shut down the city’s heating but hit a different heating plant still under construction instead.

The worst assault was in the beginning of March, when Russian war planes hit a nine-story block of flats in a residential area, killing 22 adults and two children, Oleksy recalls in sadness.

Then it was strictly artillery fire, with the city’s power plant a prime target. “They hit it three times, and each time, we would go out there to restore power.”

The power plant not only provides Sumy with electricity, but powers the city’s water pumps. “The first time they knocked out the power, people had not stocked up on drinking water and were melting snow to drink,” he said.

Another target was the city’s fertilizer plant. “Luckily the ammonium tanks were almost empty and when they were hit, the wind was blowing away from the city.”

As the war went on, Oleksy found himself mostly hunting down roving bands of Russian soldiers.

“These were small groups of Russians, Tajiks and Buryats. They gave up without a fight when surrounded, claiming to be deserters. We were told they were saboteurs. They looked like marauders.”

Even though the fighting in Ukraine has moved east, Oleksiy remains in uniform, together with his brother.

I asked him if he has any regrets. “Before the war, I had tried to join the Border Guards and the Police, but was deemed unfit. Now I am glad that they did.”