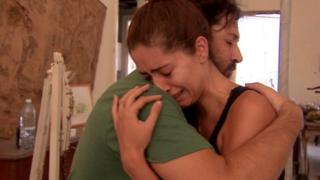 Eddie Bitar takes me into his apartment. Without windows. Strewn with the shattered debris. Deep cracks zigzag along every wall.

He steps over rubble and wrestles the front door aside. It is smeared red and he points it out: “This is the blood of my brother.”

We walk in. His wife Yara recounts the day she can never forget, and weeps. This country was already wracked with crisis; people’s savings and hopes were evaporating.

Now grief and rage are Lebanon’s new currency. “We will stay here, we will raise our kids here, stronger than ever. Nothing like this will ever [be allowed to] happen again,” Yara cries.

The explosion was like 15 years of war in 15 seconds, says Lebanon’s team at the United Nations, comparing its impact to the devastation from the country’s civil war that lasted from 1975 to 1990.

Now, amid financial meltdown and political turmoil, Lebanon has to undertake a single recovery effort of unprecedented scale.

The level of destruction is hard to believe and it is everywhere. 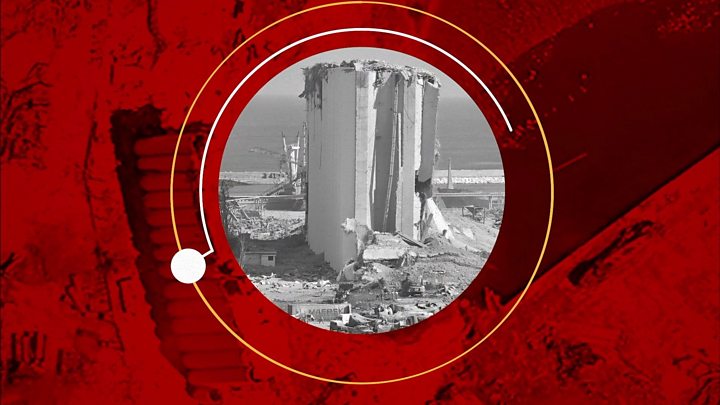 At the port, the grain silo that stored much of the country’s wheat supplies is a tomb-like wreck rising from vaporised remains of the docks. Where people worked unloading ships there is now a flooded crater more than 40m (130ft) deep.

Among the dead there were at least 43 Syrian workers, according to embassy officials. The homes and savings of many refugee families who lived in nearby industrial neighbourhoods have been destroyed.

Further back in Gemmayzeh, where Eddie and Yara lived, I walk through streets carpeted with broken glass; where beautiful old stone buildings are now rubble heaps that crushed cars when they toppled.

The destruction goes on and on; miles from the blast site apartments are wrecked and families left homeless. It’s estimated 300,000 people do not have homes fit to live in.

Many families need sanitation and hygiene supplies until basic services can be restored, according to the UN’s humanitarian agency.

Three major hospitals are out of action and less than half of all healthcare centres are able to provide full services.

“The blast took everything,” says Marc, who ran a shop near the port. “The metal was torn like paper, it was crazy. Two people died in front of our store.”

But the new symbols of Lebanon’s famed resilience are everywhere. Squads of people with brooms and shovels are trying to sweep up a broken city.

Near the port I bump into Fadi, a construction engineer who is rallying friends to try to make safe the scores of wrecked buildings. He points to a high-rise block.

“If you take a look, see that balcony over there, that’s almost another projectile [that could] fall from 30 floors.” 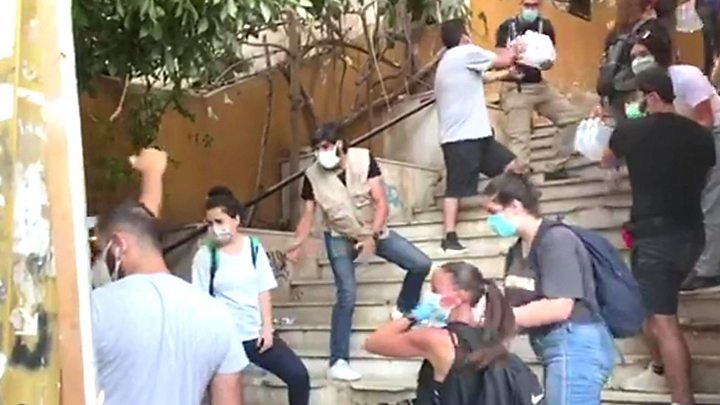 He is working with other engineer friends to photograph danger points, geo-tagging and sending them around so people can try to remove them safely.

But these people will not be enough to restore a country brought even closer to collapse.

Fortitude has its limits after the multiple shocks Lebanon has already endured; a currency collapse, mass anti-government protests, coronavirus.

The explosion of thousands of tonnes of unsafely stored ammonium nitrate has come to symbolise the perceived mismanagement of an entire country.

The political system was established after the civil war in an effort to enable power-sharing in a country of sectarian divides.

But instead many see it as a front for patronage, cronyism and endemic corruption.

When it comes to Beirut’s residents the blast did not discriminate.

More on the explosion in Beirut

Gemmayzeh was hard hit. It is a wealthy area where there is strong support for the Lebanese Forces, one of the main Christian factions.

The Sunni Muslim areas of the Corniche and Ain al-Mraysseh were damaged.

Others have been searching for loved ones lost in the port – many Shia Muslim labourers whose families form a base of support for Hezbollah, the armed movement which dominates Lebanese politics.

Amid growing anger at what many see as a corrupt political elite sharing out jobs and favours based on sect, and not merit, the explosion’s aftershocks also risk aggravating divisions.

Lebanese political analyst Sami Nader describes the system as a “cartel of political parties” which take advantage of sectarian division to establish their rule.

In the wake of the blast he believes this establishment “will try their old tricks” to hold onto power.

Anti-government protests are growing. In Martyrs’ Square, groups of demonstrators gather each afternoon. They have been surging towards the parliament complex, trying to breach the barricades and met by riot police firing tear gas and rubber bullets.

The mass resignation of the cabinet on Tuesday marked the second fall of a government in a year. But it has done little to quell the fury – MPs must choose a new prime minister; involving the same sectarian politics as before.

Another mass protest is planned for Saturday; the authorities have sent workers to weld giant metal plates to already blast-hit buildings close to the parliament.

Back at Eddie Bitar’s damaged apartment I hear how his wounded brother is recovering.

“They took our money, they put debts for the generations to come. They killed our forest, they burned them. They are killing our soul. But we are resilient people,” he says.

Amid the wreckage, he vows that Lebanon “will be ruled by the youth who did everything… to reconstruct our country”.