Protesters clash with police outside the residence of embattled prime minister, who is facing corruption allegations. 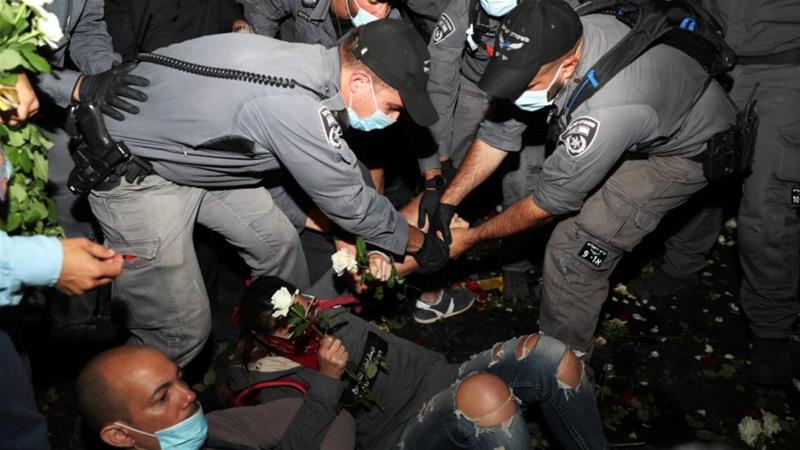 Thousands of demonstrators have returned to the streets of Jerusalem calling for the resignation of Israeli Prime Minister Benjamin Netanyahu over allegations of corruption and his mishandling of the coronavirus pandemic.

Protesters were seen clashing with police late into the night on Saturday and early on Sunday outside the residence of the embattled prime minister, who had recently clinched a historic diplomatic deal with the United Arab Emirates.

Images from news agencies and social media showed several demonstrators being dragged by police as anti-Netanyahu protests continued for the eighth week.

According to reports, some of the protesters had also attempted to march toward the residence of Israeli President Reuven Rivlin but were prevented by police.

Haaretz newspaper estimated that as many as 50,000 Israelis protested across the country on Saturday.

Netanyahu has dismissed the demonstrators as “leftists” and “anarchists” and accused local media of strengthening the protests by giving them heavy coverage.

The Israeli prime minister was sworn in for a fifth term in May after clinching a coalition deal four months ago with centrist Benny Gantz, his main rival in three inconclusive elections since April 2019.

Netanyahu, who heads the right-wing Likud party, has often complained of press bias against him, and some of the charges he faces in a corruption trial related to alleged attempts to seek favourable coverage from media barons in return for state favours.

The prime minister has denied wrongdoing in the three corruption cases against him.

In recent days, Netanyahu got a political boost after Israel announced a historic normalisation of diplomatic relations with the United Arab Emirates.

But the prime minister still faces criticism for his handling of the coronavirus pandemic, which has infected over 92,000 people and killed over 670 others.