A Polish Olympian has auctioned her silver medal from the Tokyo Games to raise money for an eight-month-old baby’s heart surgery.

She said knowing how much she had to “fight against adversity and pain” made her want to help Milosz Malysa, who has a serious heart defect. 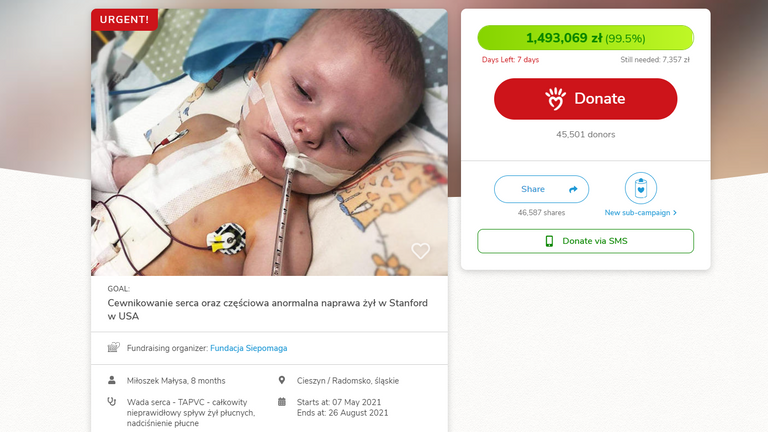 “I didn’t spend long thinking about this,” she said. “It was the first fundraiser I came across and I knew it was the right one.”

Milosz’s family has been appealing for funds to pay for an operation in Stanford, California, saying they have run out of viable options in Poland.

If the infant does not get the surgery soon, his parents said he could die.

When she launched the fundraiser on Facebook, Ms Andrejczyk said half of the 1.5 million zloty (£280,000) needed had already been crowdfunded by the family and she wanted to raise the other half.

Its donation and further contributions surpassed the £140,000-mark she had hoped for.

The athlete said: “The winner, and at the same time, the company I will be eternally grateful to, is the company Zabka.

“It is with the greatest pleasure that I give you, Zabka, this medal, which for me is a symbol of struggle, faith and the pursuit of dreams despite many odds.

“I hope that for you it will be a symbol of the life we fought for together.”

The company insisted she keep the medal.

“We were moved by the beautiful and extremely noble gesture of our Olympian,” a spokesperson said, adding: “We have decided that the silver medal from Tokyo will stay with Mrs Maria.”