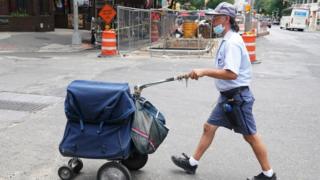 Universal mail voting would make the US “a laughing stock”, President Donald Trump has said, as he continues his vocal opposition to postal voting.

It comes after the US Postal Service (USPS) warned that millions of mail-in votes may not arrive in time to be counted in November’s election.

A record number of people are expected to vote by mail due to the pandemic.

Critics have blamed the new USPS head – a loyal supporter of President Donald Trump – for a slowdown in deliveries.

Democrats, including former President Barack Obama, have accused Mr Trump of attacking postal voting and the USPS in a bid to “undermine the election”.

The president has repeatedly said mail-in ballots will lead to voting fraud and give a boost to his rival Democrat Joe Biden.

However, experts say the mail-in voting system, which Mr Trump himself uses, is safe from tampering.

Speaker Nancy Pelosi, meanwhile, is considering recalling Congress early to address the changes introduced to the USPS and the potential impact on the 3 November election, according to Reuters news agency.

Only a handful of states have so far said they will holding universal mail voting, meaning that voters will automatically receive a postal ballot ahead of the election – and a number of these did so before the pandemic.

Elsewhere, voters will still have to request to cast their vote by mail.

What did Trump say?

Speaking at a news conference on Saturday evening, the president said he had no issue with absentee voting, which he himself uses.

But he added: “Universal mail-in voting is going to be catastrophic, it’s going to make our country the laughing stock of the world.”

“The problem with the mail-in voting, number one, is you’re never going to know when the election is over,” he continued.

He went on to say that the result of November’s vote might not be known “for months or for years, because these ballots are going to be lost, they’re going to be gone”.

He also blamed the Democrats for failing to reach a deal on USPS funding.

He has previously told Fox News he was blocking additional funding for the financially troubled agency, because he opposes mail-in voting.

“Now they need that money in order to make the post office work so it can take all of these millions and millions of ballots,” he said. “Now, if we don’t make a deal, that means they don’t get the money. That means they can’t have universal mail-in voting, they just can’t have it.”

The USPS, which has long been in financial trouble and carries about $160bn (£122bn) in debt, sent letters to states across the US in July warning that it could not guarantee that all mail votes would arrive in time to be counted.

At least 15 states have received a letter, according to NBC News.

Critics say changes made by the new Postmaster General Louis DeJoy – a major Republican donor – like clamping down on overtime and halting late delivery trips have led to an increase in mail waiting times.

But Mr Trump told Fox News he was blocking additional funding for the financially troubled agency, because he opposes mail-in voting.

“Now they need that money in order to make the post office work so it can take all of these millions and millions of ballots,” he said.

What has been the reaction?

Democrats have strongly criticised the president’s stance towards the USPS, with Nancy Pelosi and Chuck Schumer accusing Mr Trump of “sabotage tactics”.

Joe Biden, meanwhile, has sought to reassure voters, tweeting on Friday: “Voting by mail is safe and secure. And don’t take my word for it: Take it from the President, who just requested his mail-in ballot for the Florida primary on Tuesday.”

Singer Taylor Swift has also weighed in on the debate, accusing the president of choosing to “blatantly cheat”.

“Request a ballot early. Vote early,” she said in a tweet that received hundreds of thousands of likes.