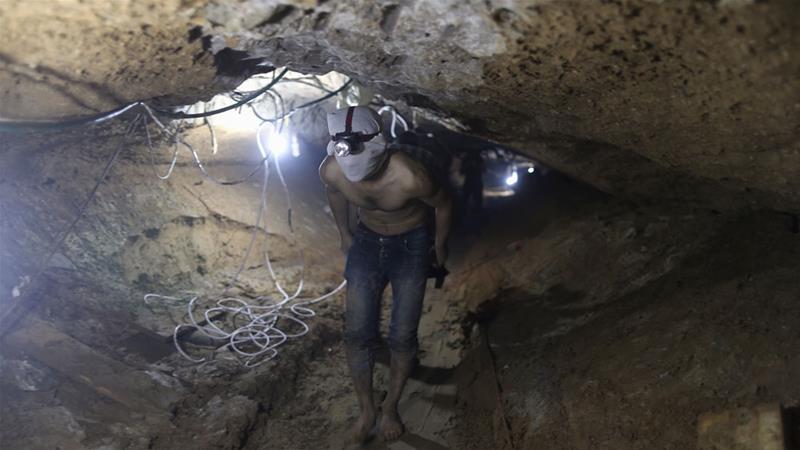 Two Palestinians were killed overnight in a tunnel between the Gaza Strip and Egypt, the Hamas-run interior ministry said Monday.

According to spokesman Iyad al-Bozum, one of the casualties was a Hamas police officer and the other a civilian.

The two killed Palestinians were on a mission to rescue three workers who had called for help after the toxic gas was pumped into the tunnel, according to the spokesman.

Civil defence crews, alerted on Sunday, retrieved the two bodies from the tunnel “after a great effort that lasted several hours”, Bozum said in a statement.

They also rescued two other security officers who had participated in the mission and evacuated them to hospital as they were also suffering from gas inhalation.

Bozum did not comment on the origin of the substance, but a Palestinian security source said the Egyptian military has used gas to halt the use of illegal tunnels it finds along the border.

The Egyptian army could not be reached for comment Monday but in 2010, Cairo denied similar charges after the deaths of four Palestinians in a border tunnel.

Since Israel imposed a blockade on the Gaza Strip soon after the Hamas movement seized control of it in 2007, Palestinians have dug hundreds of tunnels to defy the restrictions and smuggle goods in from Egypt, such as food, cigarettes, diesel, clothing and disassembled cars.

They once served as a lifeline for the cramped territory of two million people squeezed between Israel, Egypt and the Mediterranean Sea.

Egyptian President Abdel Fattah el-Sisi has cracked down on the tunnels since assuming office in 2014.

Tensions between Egypt and Hamas have eased in recent years and many Egyptian goods are now imported into Gaza openly through the Rafah border crossing.

Destruction from three Israeli offensives since 2008, including damage to the enclave’s water, sanitation, energy, and medical facilities, coupled with slow reconstruction due to the blockade, led the UN in September to warn that Gaza could be “uninhabitable” by 2020.