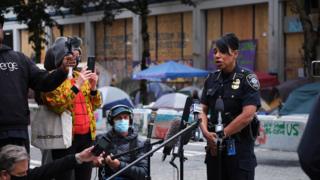 A teenager has been killed and another critically wounded in a shooting in Seattle’s autonomous zone.

One teenager, 16, was fatally shot and died after being taken to hospital. The other victim, 14, is in intensive care.

The zone, initially known as Capitol Hill Autonomous Zone (Chaz) and now called Capitol Hill Occupied Protest (Chop), was set up amid protests over the killing of George Floyd.

As it is part of a protest against police brutality, it is self-policing.

In a statement, Seattle hospital Harborview Medical Center said one of the boys was brought in by a private vehicle at 03:15 local time, while the other was driven in by the Fire Department’s medical team at 03:30 on Monday.

“The male shooting victim who arrived to Harborview… at 03:30 from the Chop area on Capitol Hill in Seattle has unfortunately died,” the statement added.

Although the site was initially occupied by hundreds of peaceful protesters, this is the fourth shooting within the boundaries of Chop in the last 10 days.

In the first shooting, which happened in the early hours of 20 June, a 19-year-old man called Horace Lorenzo Anderson was killed and a 33-year-old man was injured.

A second shooting the next day left a 17-year-old boy injured, and another person was wounded in a third shooting two days later.

After the latest violence city officials have said they are considering dismantling Chop, and reopening a police station in the area that was abandoned by officers when the zone was first set up.

Chief Carmen Best, from the Seattle Police Department, said they had found a white Jeep “riddled with bullet holes” near one of the concrete barriers to Chop.

She also accused protesters and residents of “not being cooperative with our requests for help”, and said the zone was now “not safe for anybody”.

Seattle Mayor Jenny Durkan, a Democrat who served as US attorney under former President Barack Obama, has also been facing calls to resign from people on both sides of the political divide over her handling of protests in the city and Chop.

Last week, she said she would work with protesters to bring an end to the protest zone. However, the barricades are still up.

According to local media, the area is largely peaceful during the day, with people relaxing in the park while volunteers hand out free food.

It spans a six-block radius of the city’s trendy arts scene that has been gentrified in recent years.

Protesters have planted a community garden and painted a large “Black Lives Matter” mural on the street.

But at night, the area is said to become tense as demonstrators march and openly armed watchmen patrol the streets.

How did the protest zone come about?

The protests in Seattle in Washington state began in response to last month’s death in police custody of an unarmed black man, George Floyd, in Minneapolis, Minnesota.

The area around East Precinct in Seattle became a battleground between protesters and police at the beginning of this month, leading the governor to send in the National Guard and the mayor to impose a curfew.

The mayor finally ordered barricades to be removed near the precinct and the police building was boarded up.

President Donald Trump, a Republican, had threatened to “take back” the city, but Mayor Durkan and Washington Governor Jay Inslee, both Democrats, told him to mind his own business.