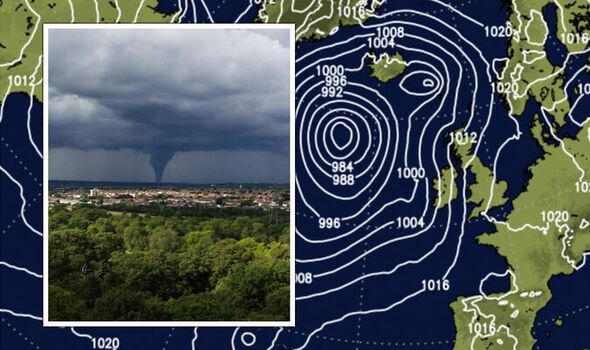 Colliding air masses ploughing into the UK will trigger an unstable, volatile and explosive atmosphere, forecasters warn. The UK faces further thundery and torrential downpours though the rest of this week as temperatures continue to soar.

Jim Dale, meteorologist for British Weather Services, said: “Tornadoes are always a risk when we see this sort of weather pattern.

“They are the result of an unstable atmosphere, and although we won’t see anything like the huge tornadoes they get in the United States, the UK is not unfamiliar with smaller ones that can happen during this type of weather.

“This could be a risk through the next few days and beyond.”

A separate plume of thunderstorms surging up from the Continent through the coming days will unleash torrents of rain across the UK.

The nation will be caught in a ‘pincer movement’ of weather fronts as temperatures rocket into the high 20Cs.

A ‘repeat cycle’ of frenzied attacks will persist through the rest of a ‘lively’ week, according to Met Office meteorologist Alex Deakin.

He said: “We have already seen thunderstorms over the weekend, but we are in line for more.

“We are in a repeat cycle with a washing-machine low pressure out to the west throwing up weather fronts.

“Lurking down across the English Channel is the threat of another plume of warm air pushing up and bringing the risk of more thunderstorms which could be really quite heavy through Wednesday evening and into Thursday.

“Another weather front coming from that low swings into the west at the same time in a pincer movement, and there is the potential for both of these to bring some heavy rain.”

South-eastern Britain is on alert for a mammoth thunderstorm assault tonight before temperatures rocket again tomorrow.

Britain will stay in the firing line of Atlantic weather fronts through the rest of the week before the weather settles.

Mr Deakin said: “We are keeping our eyes on the southeast where there could be some big thunderstorms on Wednesday night and into Thursday.

“By Friday, it’s a question of watching that low-pressure system throwing weather fronts in and watching the south where there is the potential of further thundery rain to come up.

“There is the potential for some lively weather through the rest of the week.”

Temperatures today across south-eastern Britain could soar into the low- to mid-20Cs, he added.

Britain is suffering ‘payback’ for the unusually calm and settled conditions during the start of Spring.

A natural balancing effect will now dish up a spate of volatile outbursts which could last through the rest of May.

Battling air masses smashing cooler weather fronts against unstable, moist and warm plumes from the south will drive the eruptions.

Mr Dale said: “The unpredictability and instability of the weather is largely the result of different air masses coming together and sparking unstable conditions.

“It is also a payback for the very settled and dry weather we had in April, and this is usually what we expect to see.

“The weather always balances itself in this way, and that is what we are seeing at the moment.”