Grey skies, rain and strong winds have dominated September so far, with temperatures a far cry from the August heatwave. The current cold and rainy weather is due to a cold front lingering across the UK, bringing patchy rain and dipping temperatures. However, next week could see conditions revert back to sunny skies and warm weather.

This weekend will be largely dry with sunny spells across many southern and eastern areas, however, scattered showers are predicted in the northwest.

A similar outlook is forecast for Sunday, with the weather growing cloudier and windy on Monday and Tuesday with patches of rain.

While the week will start off “rather cool” the Met Office forecast it will turn warmer as the week goes on.

According to the Met Office, next week will see Tropical Maritime air “drawn across the UK”. 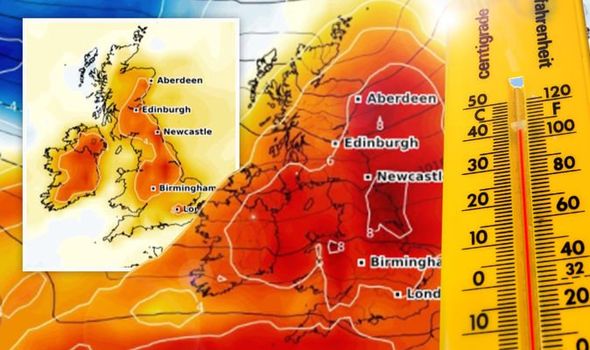 A spokesperson said: “It is likely to turn warm in the south-east of England where temperatures will rise into the low 20Cs, perhaps mid-20Cs in one or two spots.

“At present, this is not expected to fit the criteria for a heatwave, however, as this requires temperatures of 27C or higher in the south-east for at least three consecutive days.”

Warmer Atlantic air will track across the UK from the west with England and Wales forecast to see the mercury soar as high as 24C next week.

However, the Met Office said: “This warm weather will be associated with cloud and rain for some of us, as the jet stream remains over the UK.” 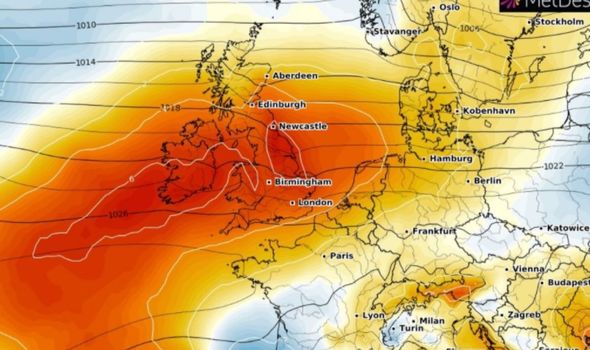 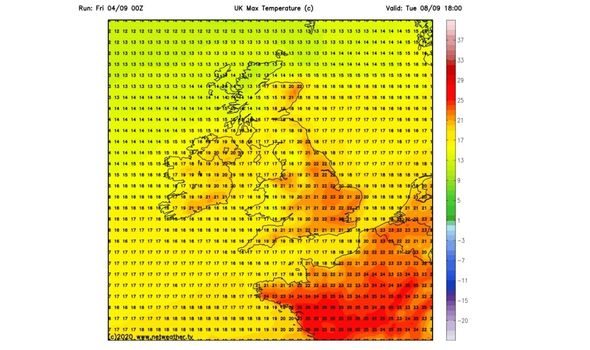 According to Met Office weather maps, sunny skies will be seen widely across the East of England, up into Scotland and across the North West on Wednesday.

Maps have turned red with the heat anomalies, with up to 24C possible in the south of England.

The Met Office long-range forecast for Monday, September 7, through to Wednesday, September 16, predicts cloudy and dry conditions, but with the potential for heavy rain.

Despite this wet start to the period, more settled conditions are forecast from the West, with sunny spells.

While there will be scattered showers and strong winds, temperatures will be near normal “perhaps just above normal for a time when the rain moves in midweek.”

If the UK has several days of consistently warm weather above-average temperatures, this would be known as an Indian Summer.

This is a term used to describe a period of unseasonably warm weather, typically in September, October and November. 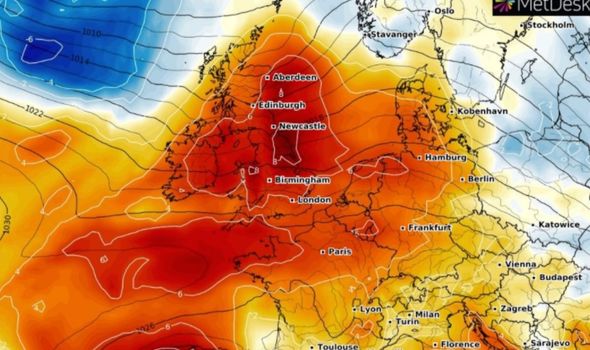 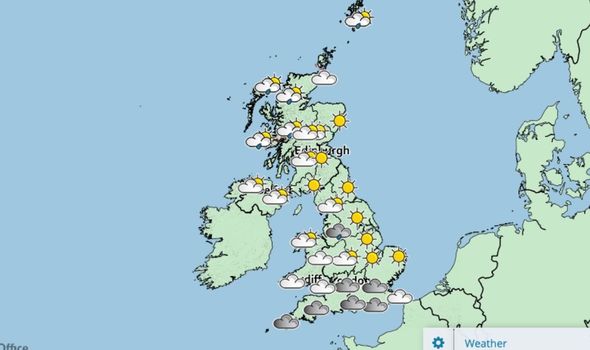 The Met Office Meteorological Glossary first published in 1916, defines an Indian summer as “a warm, calm spell of weather occurring in autumn, especially in October and November.”

Despite a baltic bank holiday last week and meteorological autumn beginning on September 1, the hot weather may not yet be over.

With sun and warmer weather forecast to shine down on the UK over the next couple of weeks, bookmakers have cut odds on heatwave conditions, an Indian Summer and even September being the hottest month of the year.

Bookmakers Betway have priced it at 7/4 the UK will bask in 30C heat this month.

“Yet, hope is not lost for an Indian summer and it’s 7/4 that September’s temperatures break a staggering 30C.”

The firm has odds of 10/1 for September being the hottest month of summer by average temperature, while it is just 12/1 to have a hosepipe ban.