BBC Weather: Flood warning issued for parts of the UK

Northern England could be hit by 17 inches of snow later in the month, according to long-range weather charts from WXCharts. Met Office spokesperson Nicola Maxey told Express.co.uk there will be a “cold front” with “wintry conditions expected.”

WXXCHARTS’s snow depth models said the UK was bracing for up to 44 cm of snow over the next fortnight.

Scotland and the far north of England will see the highest levels of snow, with 17 inches (44cm) forecast on January 29.

Temperatures are expected to plunge to bitter lows of -10C during this time. 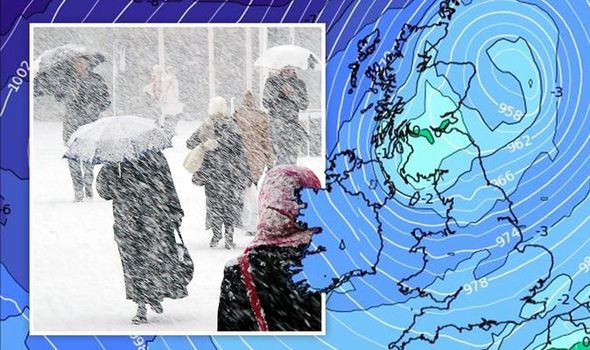 This evening, whilst large swathes of England and Wales are expected to be hit with heavy downpours, up to 10 inches (25cm) of snow will fall across the Scottish Highlands.

The southern half of the UK will experience milder temperatures of up to 10C this week but vast areas of the north will remain below freezing as a new “polar maritime air” blows in.

Jo Farrow at Netweather said there was “quite a week of UK weather coming up.”

She added: “Heavy and persistent rain bringing the risk of flooding with particular concerns for northern England and Wales. 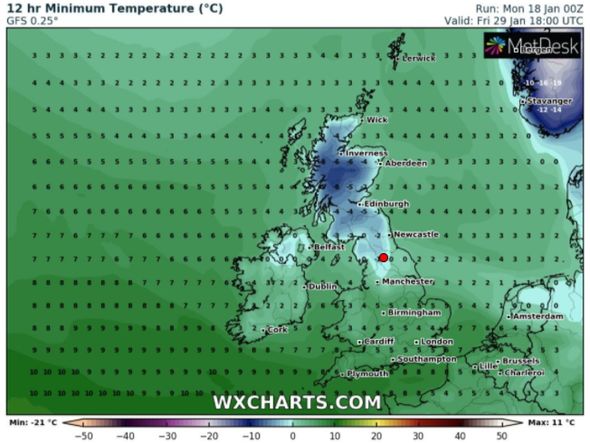 “Then a significant deepening low looks to produce gales, and snow for the north as it moves over the UK during Wednesday night and Thursday.

“The contrast north-south of cold to mild air could bring quite a storm by early Thursday.

“By the end of Wednesday into Thursday, the weather will be atrocious.

“Gales, even severe gales, more rain and snow. Already sodden ground and the low looks to keep deepening over the North Sea into Thursday afternoon.” 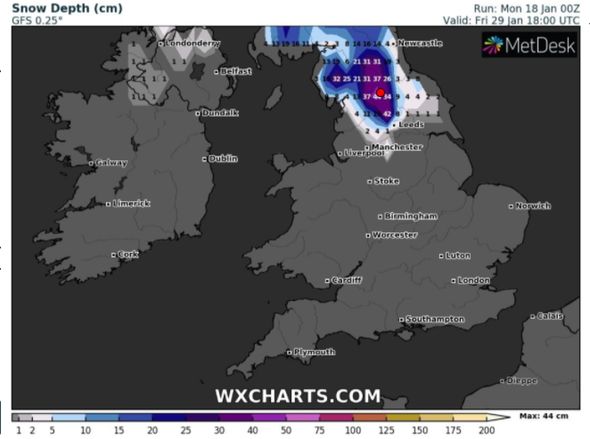 The Met Office has also issued an amber weather warning for Tuesday and Wednesday for central northern England, affecting an area around Manchester, Leeds and Sheffield.

Up to three inches of snow could fall in that area but in isolated spots, particularly in the Peak District, five inches could be possible.

The Met Office also warns of “danger to life” due to fast-flowing or deep floodwater and a “good chance some communities cut off by flooded roads”. 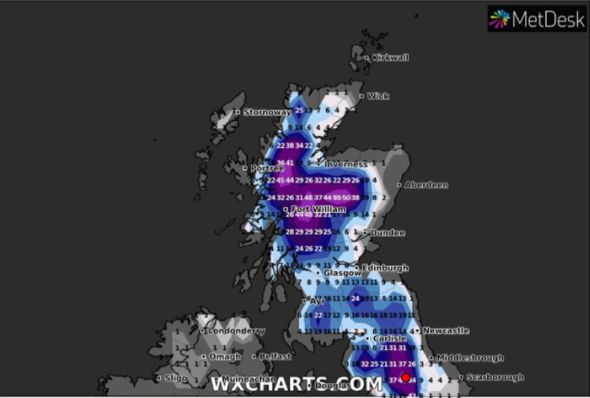 A yellow rain alert is also in place for most of northern England and Wales from Tuesday to Wednesday, before most of the UK falls into the warning on Thursday.

Ms Maxey added of this week: “It’s a very unsettled period as we go through the week until Friday where we see colder air from the North pushing away the low pressure, so we expect a fine cold day on Friday.”