BBC Weather: Fog forecast for parts of the UK

The Easter weekend is set to be characterised by chilly temperatures as low as -5C as the UK sees unsettled conditions move in. The latest weather charts also show snow is on the way, with much of the country covered by some form of snow risk over the first weekend of April. Snow risk maps by Netweather show wintry showers are forecast from Friday, April 2, Good Friday.

Maps show a cold weather front will approach the north of the UK from the early hours of Friday morning, with much of Scotland covered by a 100 percent snow risk by 6am.

As the day progresses, the chance of snow moves further south.

By Saturday morning much of Scotland and northern England has a high snow risk, as shown by the red and white colourings on the weather chart.

Wales and the midlands also have a snow risk of up to 75 percent. 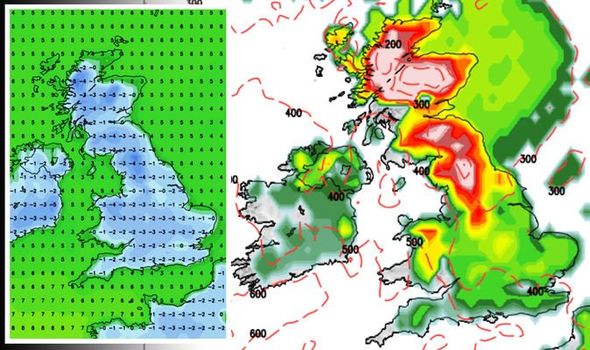 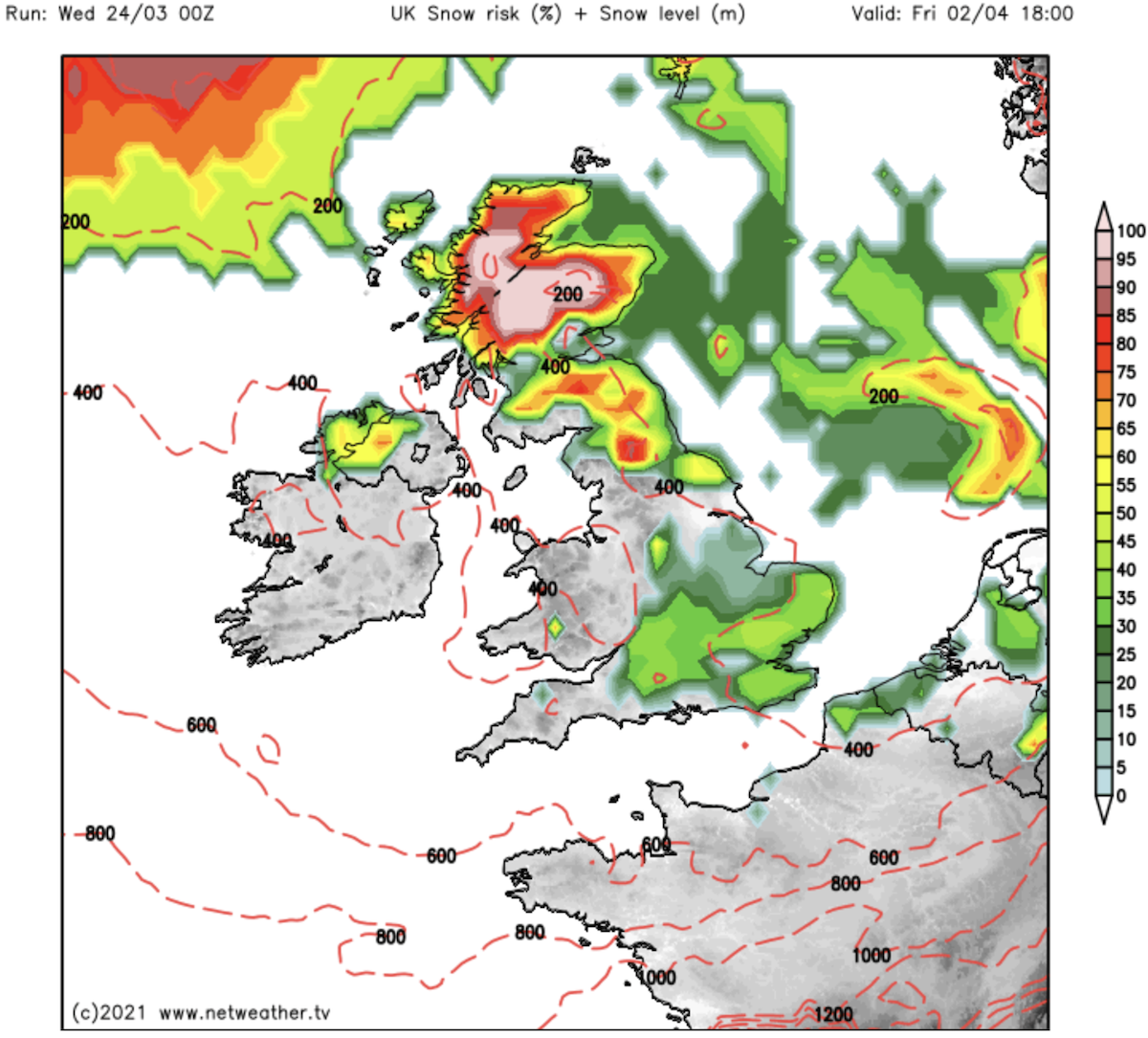 The risk of snow intensifies throughout the day and by 6pm almost the whole of the UK is expected to see wintry showers.

The snow risk map shows Scotland and northern England covered by a high snow risk, as shown by the bright colourings.

The rest of the country is covered by huge swathes of green and yellow, indicating a snow risk of up to 60 percent.

By 6pm on Easter Sunday, the risk of wintry showers has intensified across the west of the UK.

Wales, and the south west of England have a high snow risk, while much of the rest of the UK has a moderate chance of snowfall.

JUST IN: BBC Weather: Snow to return by Friday as freezing temperatures push in 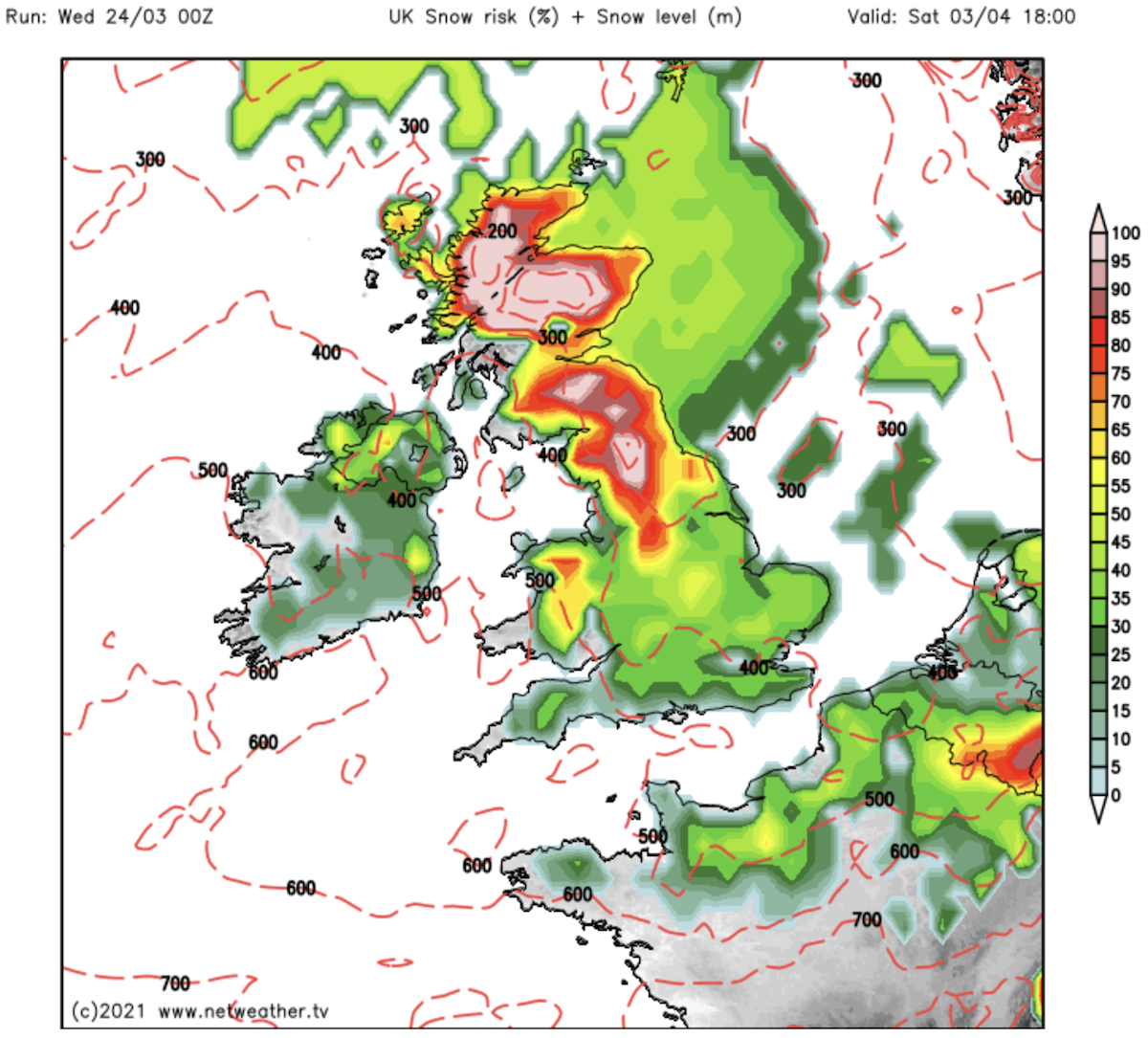 By Monday afternoon the risk of snow all but disappears.

The risk of snow coincides with a sharp plunge in temperatures.

Weather charts show a chilly -5C is forecast in Scotland at 6am on Friday April 2.

Northern England is also set to temperatures plunge to -4C, with the rest of England braced for the mercury to fluctuate around 1C.

Saturday is expected to be even colder, with a weather chart showing the whole of the UK turn an icy white. 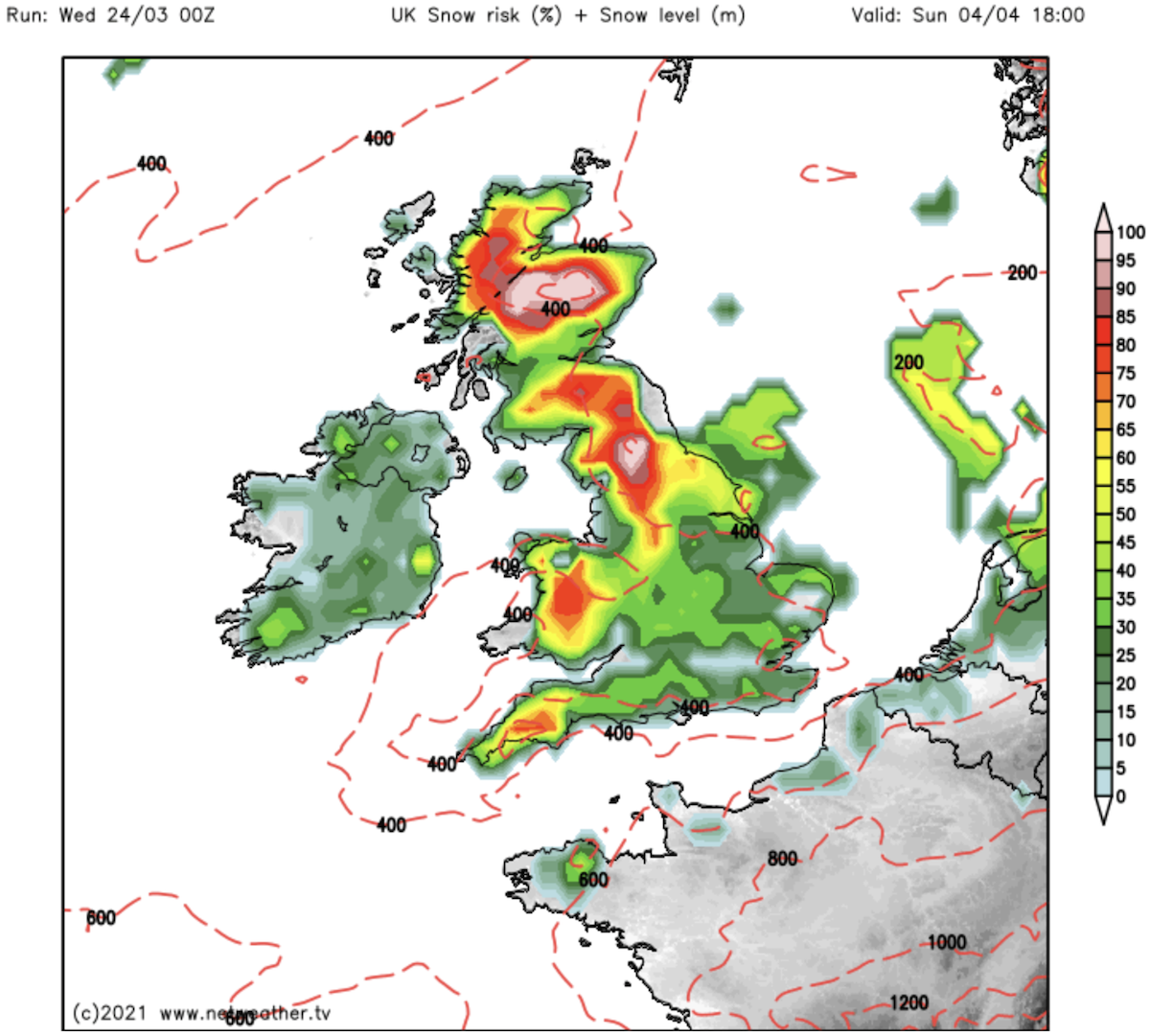 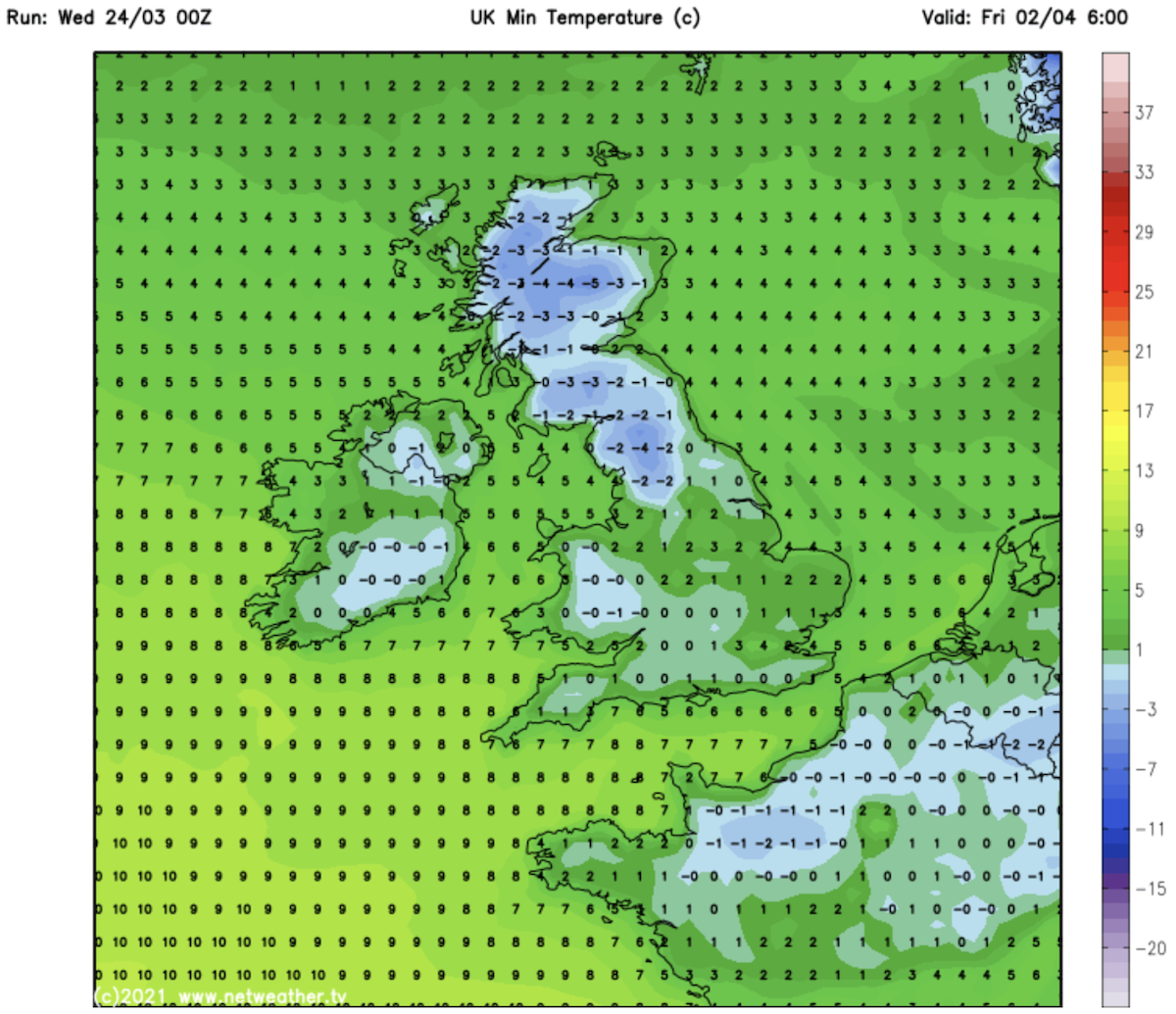 The map, valid for 6am, shows minus temperatures forecast across the country, including a chilly -5C in Scotland.

The freezing conditions continue through Sunday, with another chart showing an average of -2C is forecast across the country.

He said: “It could actually become quite chilly during the Easter period.

“High pressure may become centred to the north or west of the UK and if that happens it leads to the possibility of colder air moving in from the north or east. 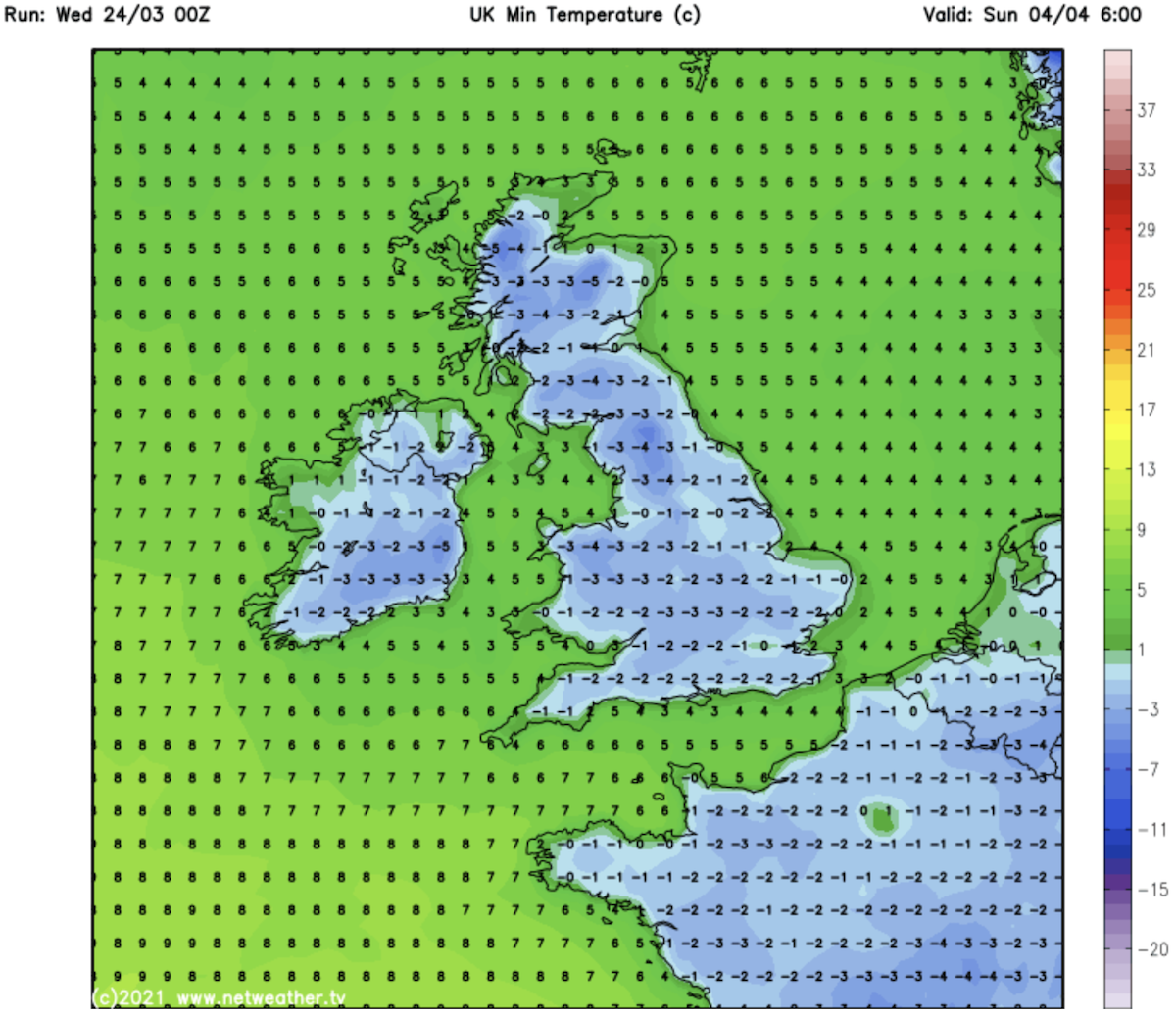 “It’s not out of the question that the northern half of the UK could see sleet or snow.

“The date of Easter changes each year and if it occurs in late March or early April, snow in the north of the UK isn’t particularly unusual, especially over the hills.

“It’s often debated whether a White Easter is more likely than a White Christmas.”

He told this website: “Moving into the Easter weekend, the early prognosis suggests a somewhat mixed affair, far more dry than wet but with subdued very British temperatures, cold nights and mornings and a million miles away from the very pleasant warmth of the Mediterranean resorts during the same time period.”