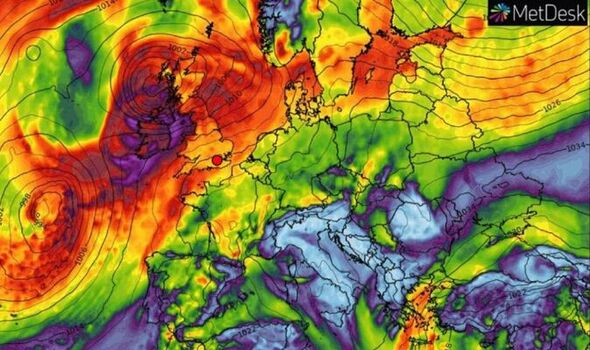 The culprit, a low-pressure cyclone strengthening off the UK coast, will whip its tail across Scotland during the start of the week. Britons with outdoor plans tonight and tomorrow are warned to keep an eye on increasingly unsettled forecasts.

Met Office meteorologist Alex Deakin said: “As the low crosses the UK, it might not be quite as intense, but it will bring a band of rain across from the southwest to the northeast with some gusty winds, particularly around its western and southern flank.

“There will be wet and windy weather through Sunday night and into Monday, so if you have plans for Monday you might want to keep up to date with the forecast.”

A calm before the storm will bring settled weather today before winds pick up this evening.

And forecasters say temperatures are about to climb ahead of a blast of warmth later in the week.

Met Office meteorologist Greg Dewhurst said: “It should feel warmer on Sunday compared to Saturday, with 16C or 17C possible, and 18C in the far southeast.

“Through Sunday evening we see wetter and windier weather moving in, initially affecting parts of Northern Ireland but soon sweeping in across the whole of the UK.”

Winds will hit 50mph in exposed parts of northern Britain tonight, although it will remain mild through the coming days, he added.

He said: “Winds are really picking up across the northwest of the UK on Sunday with gusts of 40mph or 50 mph possible, as we head into the early hours of Monday.

“Rain will be followed by showers across the rest of England and Wales.

“Temperatures overnight into Monday morning will generally stay in double figures, perhaps into single figures in the north.”

Forecasts for warmer weather come just days after experts had sounded the alarm bells for an early winter freeze.

The dramatic turnaround has been blamed on the jet stream which unexpectedly swerved northwards opening the gates to warm air from the south.

The jet stream has also driven low-pressure systems in from the Atlantic, shaking up the weather and disrupting the anticipated northerly blast.

Jim Dale, meteorologist for British Weather Services, and author of Weather Or Not? said: “This is due to the particularly unpredictable nature of the jet stream, and this has turned the forecasts upside down.

“It’s gone from predictions for a very cold snap next week to forecasts for rising temperatures and a possible warm spell.

“What looked like a cold period has been shot to pieces, and we could now see temperatures lifting higher than average for the time of year.”

Southern Britain will see thermometers rise into the mid-teens this week, possibly nudging 20C on Wednesday.

Scotland and northern England will be cooler, although the mercury could still touch double figures.

Weather models show unusually high temperatures holding out through mid-month and possibly up to the last week of October.

However, another swerve of the jet stream in the run-up to November threatens to put the nation back in the washing machine.

Weathertrending meteorologist John Hammond said: “While the dry and mild interlude may linger until the weekend, there’s an increasing likelihood that another loop of the jet stream will swoop our way, probably from the north or west, bringing a greater chance of rain and lower temperatures.”