Storm Dennis is expected to bring very heavy rain, flooding and disruption to travel over the weekend, according to the Met Office forecasts. Multiple National Severe Weather Warnings for wind and rain are in place from Saturday through to Monday, including several amber rain warnings for parts of England and Wales.

Met Office Chief Meteorologist, Steve Willington, said: “Storm Dennis will bring another very unsettled spell of weather this weekend with a risk of flooding, particularly in parts of England and Wales and also southern Scotland, where snowmelt will add to the flood risk.

“Following Storm Ciara last weekend and further spells of rain this week, the ground is already saturated in places.

“With Storm Dennis bringing further heavy and persistent rain over the weekend, there is a risk of significant impacts from flooding, including damage to property and a danger to life from fast flowing floodwater.”

Britain will likely see extensive flooding of homes and businesses, with some 15 warnings and 159 alerts already in place from the Environment Agency. 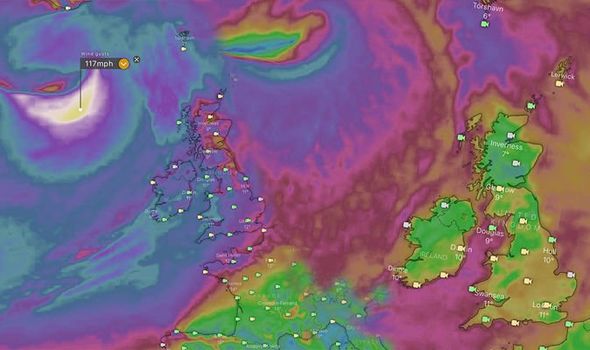 The Met Office warned communities could be completely cut off by floodwater, perhaps for several days, as Storm Dennis sweeps in.

While travel and traffic disruption is expected, with Gatwick and Heathrow airport seeing flights cancelled while roads may be closed throughout the weekend.

The Severn Bridge to Wales has already been shut down due to the risk from the approaching winds.

And the Royal Navy has been called in top assist the RNLI after a man went overboard off the coast of Kent. 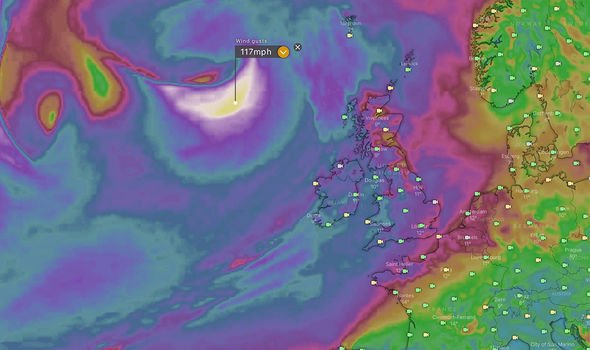 Where is Storm Dennis right now?

Storm Dennis is currently tracking to the north-west of Britain, according to the latest satellite forecast maps from Windy.com.

The barreling storm formed in the Western Atlantic earlier this week, coming just after Storm Ciara made a similar path towards Britain.

As the storm formed on Thursday, as separate low pressure system had also formed in the Atlantic, which brought snow and high winds to Iceland on Friday.

The two systems danced around each other on February 14, before Dennis moved towards the eats – tracking towards Britain. 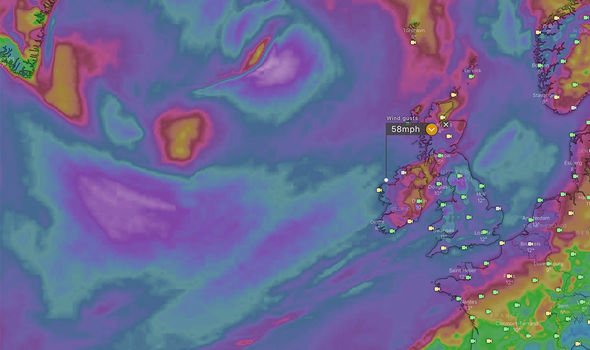 Storm Dennis will track towards Ireland on Saturday, which will feel the brunt of the winds.

Then the rest of the UK will feel the impact into early Sunday.

As of 1pm on Saturday, fierce gusts will start to batter the south-western coast of Ireland.

The eye of the storm will be located to the north east of the UK and Ireland, where wind gusts will reach up to a staggering 113mph.

Winds have already hit Wales, where images show the effects of Dennis as waves batter the coast.

By 9pm this evening, the Republic of Ireland will see winds of 40 to 45mph approach the western coast line while gusts will reach up to 65mph, according to Windy.

These gusts then spread to England, Wales and Scotland.

As this map from Windy shows, as of 7am on Sunday the storm is forecast to bring wind gusts of about 70mph to parts of the UK.

Wales, parts of northern Devon and the south to southeast coast will see the most fierce winds – while we can expect up to 60mph wind gusts to hit mainland England and Scotland. 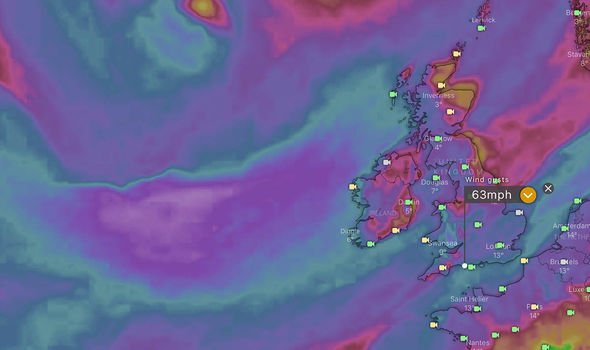 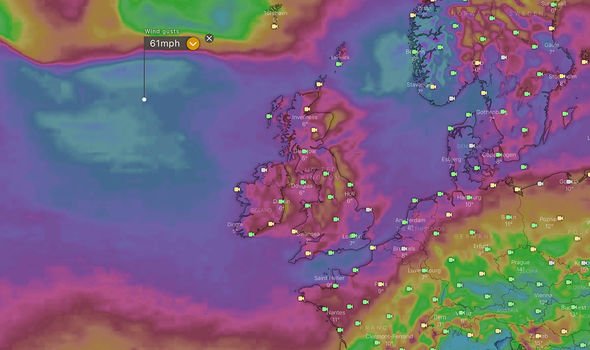 By Monday, the worst of the storm looks forecast to have subsided.

High winds will still batter parts of the UK, but with much slower speeds of 40mpg with 53mph gusts.

The storm then sweeps into Europe, with parts of the Netherland, Germany and the Baltic region bearing the brunt.

Express.co.uk will update this article when more information is available on the latest track and path of Storm Dennis.