The meteorological service reported that temperatures could reach a high of 25C in the Channel Islands and 24C in the London area. Meteorologist Jonathan Vautrey said it would be a “widely fine day” on Sunday with the good weather lasting into Sunday evening.

However Mr Vautrey warned that Sunday would start cool with the possibility of some mist and fog patches.

The meteorologist also warned that temperatures would be lower in rural areas early on Sunday.

He added that there was a risk of “isolated” showers in Northern Ireland.

He said: “For many areas of England and Wales though it will be a calm night with clear intervals. 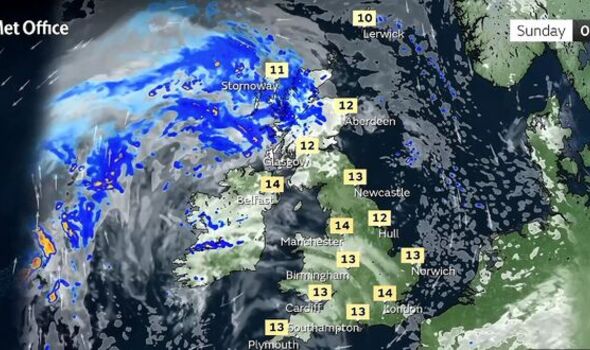 “Maybe a few mist and fog patches forming and northeast England could be a focal point for that.

“But, otherwise temperatures are holding up around low double digits for towns and cities, dropping into single figures for some rural spots.

“The clear intervals for England and Wales will transition into sunny spots as we move into Sunday and it will be another widely fine day and a pleasant one to get out and about.

“Some brightness coming through for Northern Ireland , still with the risk of an isolated shower.

“When you’re in the sunshine it will feel warm once again with highs in the mid twenties across England and Wales.

“The high teens if not pushing towards 20 degrees, for Northern Ireland and Scotland.

“We keep a fairly similar theme throughout Sunday evening with many areas staying largely dry away from northwest Scotland.”

However Mr Vautrey noted that winds will begin to “pick up” from Sunday evening.

This will result in some cooler temperatures on Bank holiday Monday.

He said: “But the winds will begin to pick up through the channel and across southern coastlines.

“This is due to the repositioning of the high pressure centre and the squeeze in the isobars.

“The northeasterly breeze that develops will push clouds into eastern locations.

“So as we move into bank holiday Monday for Northern Ireland, Wales and England it will turn a bit cooler in the east, whereas the sunshine and highest temperatures will prevail further west.”