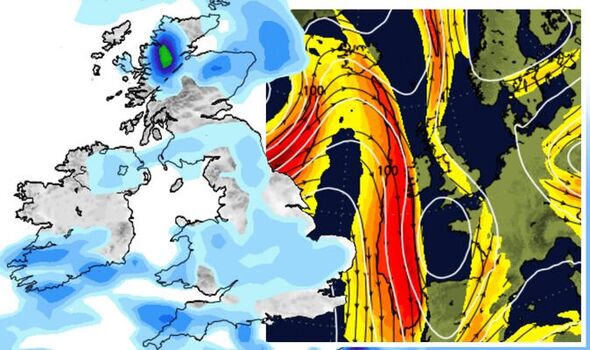 Warm weather will hang on in parts of Britain today although most places will start to feel cooler through the next 48 hours.

High pressure building to the north of the UK will compete with low pressure to the south as the jet stream plunges across the country.

Temperatures will nosedive in easterly winds as Britons are warned to start wrapping up for showers.

“On Easter Monday there will be plenty of bright and sunny weather around but there will be some showers to the north and the west of the UK.

“It will be cooler with temperatures peaking at 18C or 19C towards the southeast and in the low teens elsewhere.”

Once again, Britain’s topsy-turvy weather will fall to the mercy of a chaotic shape-shifting jet stream.

The jet will sweep around pressure systems to the north and the south of the country steering winds in from the east and rain from the southwest.

Jim Dale, meteorologist for British Weather Services, said: “The jet stream is entering a meandering phase, and this will affect the weather we expect over the next few days.

“It will drive showers and some periods of heavier rain from time to time through the coming week.

“It is going to turn more changeable after the Easter weekend.”

Temperatures will nosedive from the sizzling 23C highs seen over the past few days, he said.

The mercury will dip to freezing or just above overnight bringing frosts and even the risk of snow to high ground of the north, he added.

He said: “It is going to feel cooler and there will be the risk of frosts overnight.

“It is going to feel like you need to put a jumper back on.”

Despite the chilly forecast, blazing Easter sunshine has sparked hopes this year will bring the hottest spring on record.

Bookies have slashed the odds on temperatures soaring into the record books with Coral offering 5-4 from 2-1.

Spokesman John Hill said: “It has been a glorious bank holiday weekend across the UK and that has prompted strong interest in spring ending as a record hot season.

“Hopefully what we have enjoyed over Easter is a taste of what is to come over the next few months.”

Ladbrokes is still pinning hopes on this month busting records with 5-4 from 2-1 on the hottest April.

Spokesman Alex Apati said: “After a disappointing start to the month, odds are continuing to tumble on this going down as a record-breaking hot April.”

Winds will gain strength from mid-week when just western parts of the country will be left to enjoy the higher temperatures.

Netweather spokesman Paul Michaelwaite said: “Into midweek and beyond, we enter a stand-off, with high pressure to the northeast and eventually to the north of the country trying to control things, but with low pressure still wanting to have a say.

“Wednesday will be a transition day as the high takes more control, blocking low pressure to the west from making any progress eastwards.

“East or southeast winds will pick up as the day progresses, meaning western parts will see the best of the warmth.

“Those easterlies will be making their presence felt during Thursday and Friday with more cloud being pulled in off of the North Sea, along with a threat of some showers as low pressure moves closer by to the south of the UK.”