The Met Office has issued a yellow weather warning for Friday as rain continues to drench the UK this week. Flooding of homes and businesses is expected in parts of London, south east England, south west England, Wales and the West Midlands.

The storm, which swept through France this week, is set to bring wet and windy weather across the south of England for most of the day.

As Britain heads into the weekend, more rain will sweep over the country for most parts.

Steve Ramsdale, Chief Meteorologist at the Met Office, said: “It’ll be quite a miserable end to the working week for southern and south-west England as Storm Alex brings heavy rain and strong winds tomorrow, with coastal gales of around 60-65mph for some.

“Away from the south it’ll be a more pleasant day, with light winds and bright spells for much of northern England, Scotland and Northern Ireland. 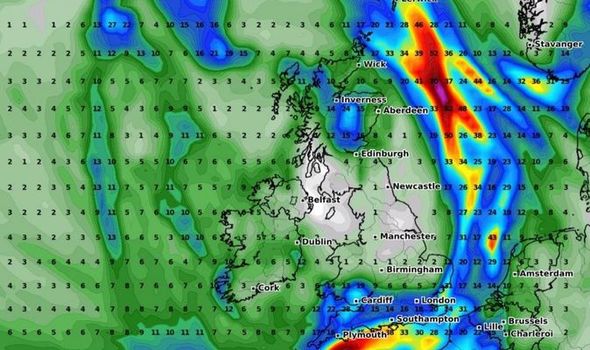 “However, as the strong winds and rain associated with Storm Alex clear away from Britain later on Friday, another low-pressure system moves towards the UK from the east bringing further very heavy rain and strong winds to many over the weekend.”

Storm Alex was named by Météo-France earlier this week and will clip the southern parts of England on Friday.

For the rest of the UK, calmer weather can be expected with lighter winds and some sun for northern England, Scotland and Northern Ireland.

But areas in Wales, southwest England and eastern Scotland could see more than 100mm of rain over the weekend. 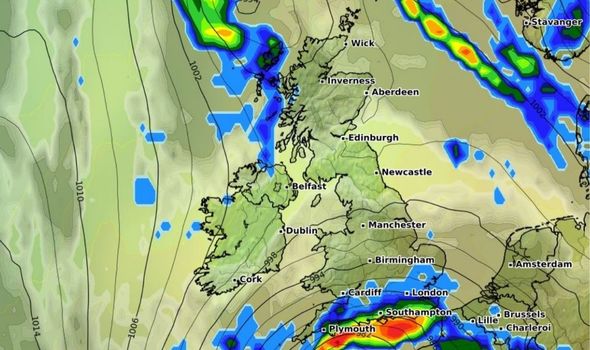 This rainfall is likely to lead to “significant impacts from flooding, an enhanced risk of landslides along with very difficult driving conditions”, according to the Met Office.

Jonathan Day, Flood Duty Manager at the Environment Agency, said: “Heavy rain will bring the potential for surface water flooding and perhaps some river flooding across the south of England on Friday.

“More widespread and persistent heavy rain across much of England will bring the potential for further river and surface water flooding over the weekend.

“Environment Agency teams have been working hard to clear grills and weed screens in areas which may be affected, and are ready to support local authorities leading on responses to surface water flooding incidents, should they occur. 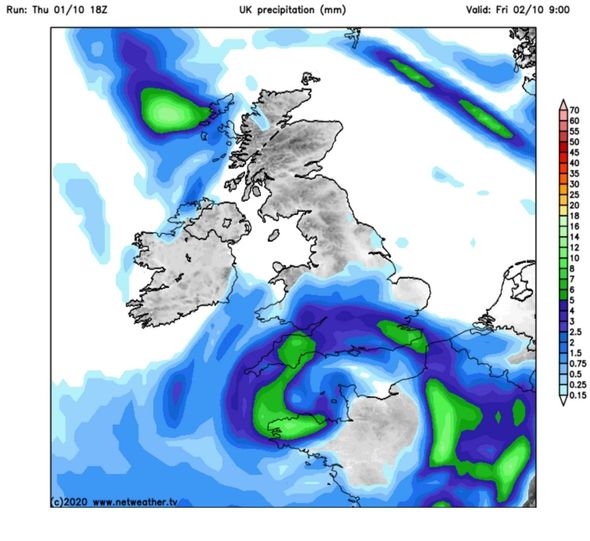 “We urge people to stay away from swollen rivers and not to drive though flood water – it is often deeper than it looks and just 30cm of flowing water is enough to float your car.”
Drivers in flood risk areas have been warned to keep safe during the torrential conditions.

Over the weekend the Met Office have issued more weather warnings as the heavy rain continues to persist.

Alex Deakin, Met Office Meteorologist, said: “Lots of heavy rain and gusty winds to come over the next few days.

“The weather warnings in force for Friday for wind and rain across southern England from Storm Alex. 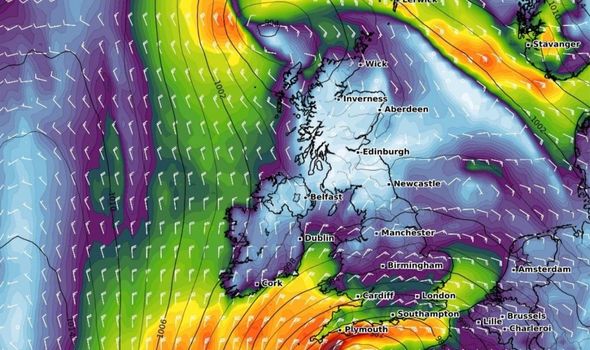 “But there are further weather warnings in force through the weekend as the rain builds up across large parts of the UK and could cause some flooding issues.”

Temperatures on Friday will “struggle” with the heavy rain and wind.

Mr Deakin said: “Temperatures as you might imagine under that zone of wet and windy weather they’re going to struggle, 11 or 12C at best.

“Fine weather though across Scotland and Northern Ireland could see highs of 14 or 15C with pretty light winds shouldn’t feel too bad.”

Related posts:
Recent Posts
Latest Posts
UK lockdown: Jenrick fails to rule out full shutdown as he insists ‘we’re not holding out’
Queen’s strict requirements for her bath which must be set depth and temperature
Coronavirus UK warning: Second lockdown looms as cases spike – ‘We have little choice!’
Keir Starmer set to face pressure to act on mammoth Labour anti-Semitism report
Air New Zealand axes hundreds more cabin crew jobs
This website uses cookies to improve your user experience and to provide you with advertisements that are relevant to your interests. By continuing to browse the site you are agreeing to our use of cookies.Ok