Britain has had its fair share of extreme weather in recent weeks and March is set for another round of beastly weather this week. On Tuesday, temperatures could plunge to -9C and as a could snow grips the country.

Frost and snow have been forecast across several parts of the country, with temperatures expected to remain low until the weekends.

The latest forecast comes after Britain was battered by Storm Jorge last weekend.

In addition, Storm Ciara and Storm Dennis impacted the UK in February, bringing record-breaking levels of rain to the UK.

The heavy rain led to severe flooding and the destruction of hundreds of homes. 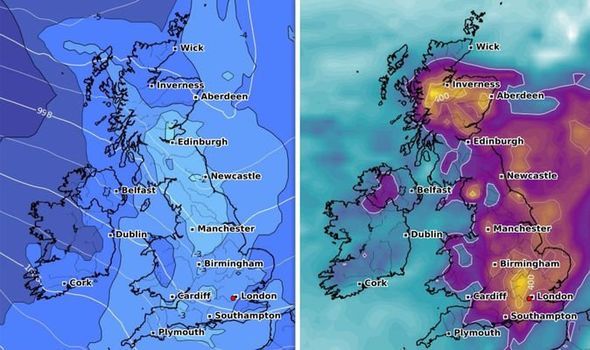 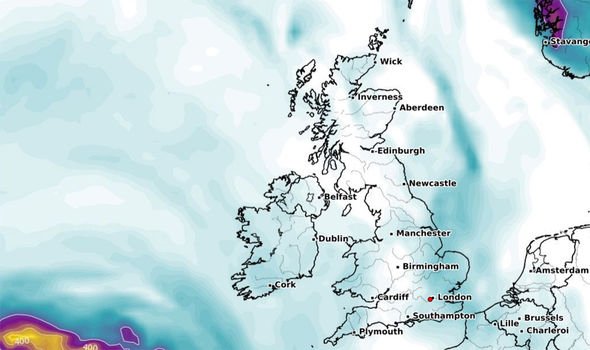 According to the Met Office, it will go far bad to worse in some of the already flood-hit areas this week.

Met Office forecaster Marco Petagna said: “It’s going from bad to worse, with more rain topping up rivers. The weather is in no hurry to leap into spring.

“Jorge really wound itself up, with explosive cyclogenesis and a pounding for the UK.”

Mr Petagna added that temperatures will plummet this week, and bring snow to some parts of the nation. 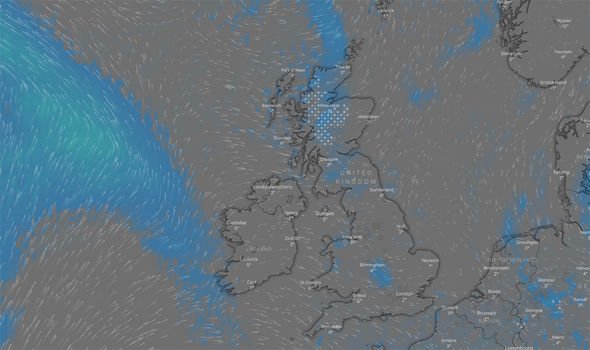 He said: “Cold air coming straight down from Greenland means temperatures close to the coldest of winter from Sunday night to Tuesday night, with down to -9C in Scotland over lying snow, -6C in northern England and -4C in the South.

“Snow in the week is likely in northern England and Scotland, with a chance to lower levels.

“Central and southern areas may have occasional hill snow, including on the North and South Downs.

“There are ice risks in places and Wednesday into Thursday is forecast more rain and gusts up to 50 to 60mph in the South. It stays wet, windy and chilly into next weekend.”

This weekend, many will experienced an early frost, according to the Met Office.

In its outlook for this weekend, the Met Office wrote: “Sunny spells on Friday with showers mainly in the west, an early frost for many.

“Turning windy over the weekend with rain, heaviest in the west, followed by blustery showers.”

Sunday will likely remain unsettled, with spells of rain interspersed by brighter and showery interludes and the wettest of the weather in the west.

Next week, the Met Offie said any snow will mainly be confined to the high ground and perhaps to lower levels in the north. 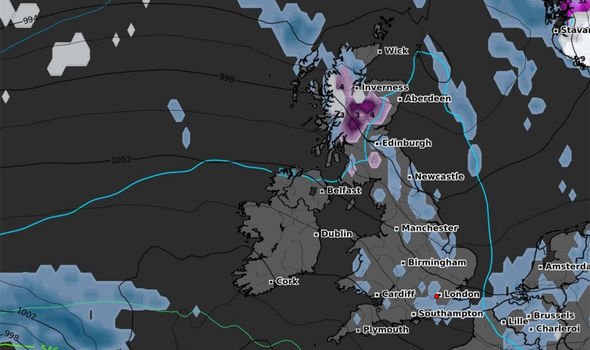 The weather will stay windy, however, with gales possible in the northwest.

Into the following week, changeable conditions are expected to continue with spells of wet and windy weather, perhaps snow over higher ground, interspersed with sunshine and showers.

The Met Office said in its long-range weather forecast for March 8 to March 17: “Some longer, drier and more settled spells are possible towards the very end of this period in the south, though the north will likely remain unsettled.

“Temperatures are likely to fluctuate around normal, with occasional overnight frost.