Public Health England has extended a level three heat-health warning across the South of England, with a heatwave potentially lasting throughout the weekend. Temperatures as high as 38C (100.4F) could scorch Southern England over the weekend, with little cloud to break up the unbearable heat. But Northern England, Wales and Scotland are set to see a more enjoyable Friday with temperatures hitting 23C (73.4F) across the Northern regions.


Met Office Chief Meteorologist, Dan Suri, said: “Although much of the UK can expect a spell of warm and sunny weather lasting into early next week, it’s going to turn very hot for parts of England and Wales with temperatures widely reaching above 30 Celsius on Friday, Saturday and Sunday.


He added: “It’s possible temperatures could reach similar levels on Saturday, before falling slightly on Sunday.


“There’s also a small chance temperatures could reach close to 38C (100.4F) in one or two spots in the southeast on Friday, but this will partly depend on the chance of cloud spreading in from the southwest during the afternoon.


“Along with hot weather by day, it will stay warm and humid overnight with temperatures remaining in the high teens and low 20s Celsius.” 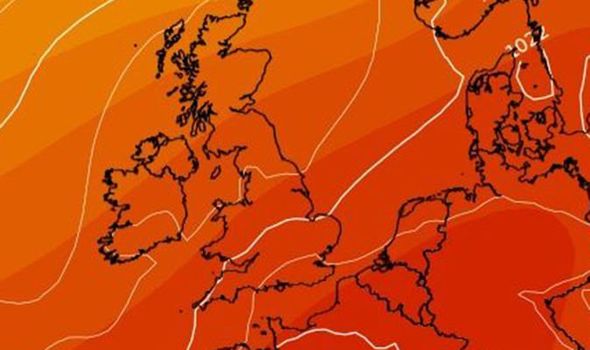 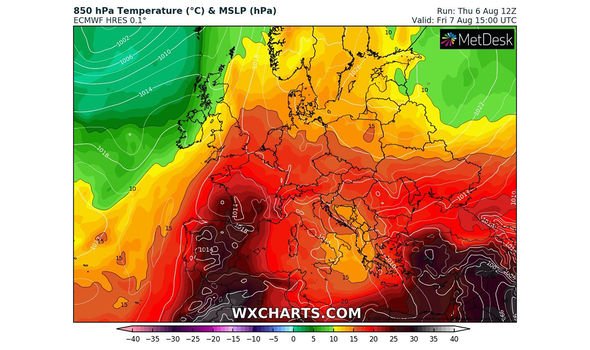 The South of England has seen the second highest heat warning PHE can issue, after Met Office meteorologists say the have a “greater than 90 percent confidence level that the day threshold temperature will be met” today.


For the South East the threshold for a heatwave is 31C, and the region is on track to smash that with a blistering 36C (96.8F).


Experts are also warning that today could even break the all-time record for Britain’s hottest day. 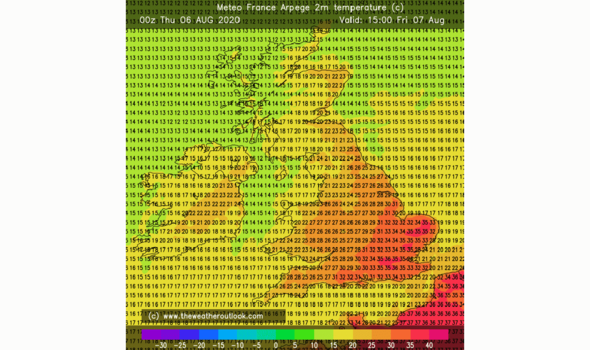 But outside of the South it is set to be a sunny but cooler day, with the morning even bringing light showers over Northern Ireland and Western Scotland.


Moving into the middle of the day, the rain will clear, with Scotland and North England seeing settled weather and sunny spells throughout the day.


Moving towards the Midlands and Wales more intense heat will be seen, with Cardiff set to see 26C (78.8F) and Birmingham scorching in 28C (82.4F).

The extraordinary heatwave is predicted to last well into the weekend, unlike last week’s mini-heatwave.


Temperatures in the South West will reach a sweltering 31C (87.8F) in Salisbury and Blandford Forum on Saturday.


The heatwave is set to be localised to the South East, with the Midlands and Wales expecting to enjoy more pleasant mid-20C weather. 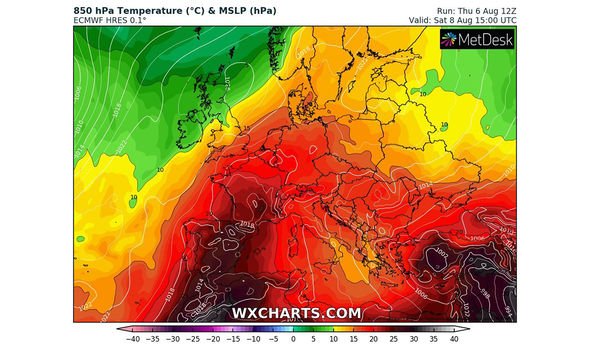 
Temperatures in the South and London are expected to remain in boiling 30C weather for days.


But Mr Bulmer added: “It looks like the heatwave could break on Tuesday and Wednesday as the risk of thunderstorms increases for many areas, although at the moment it’s a bit too early to say for certain.”