The end of June has seen temperatures dip back down to the low 20C, with the highs of 33C replaced by cloudy skies and chilling winds. However, as we head into July temperatures could once more shift to see heatwave conditions sweep the country.

According to forecasters, Europe will be facing sweltering heat as July begins, with up to 43C – 110F – possible in Spain on the weekend of July 4 and 5.

Much of the continent will experience highs of above 30C at the beginning of July.

In France, conditions will be slightly cooler than that of Spain, with highs of 31.5C on Saturday but increasing to 33C to the south of the country on Wednesday, July 8.

While highs of 40C may not be felt across the UK, temperatures will once again pick up in the UK in July. 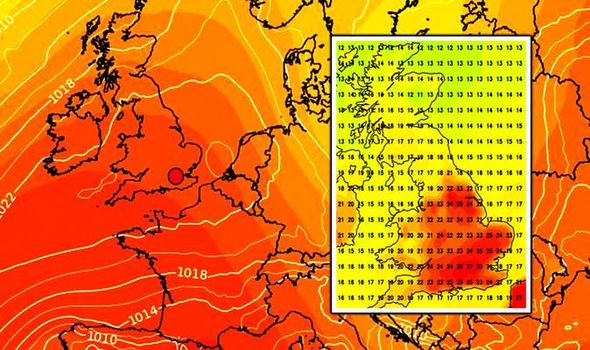 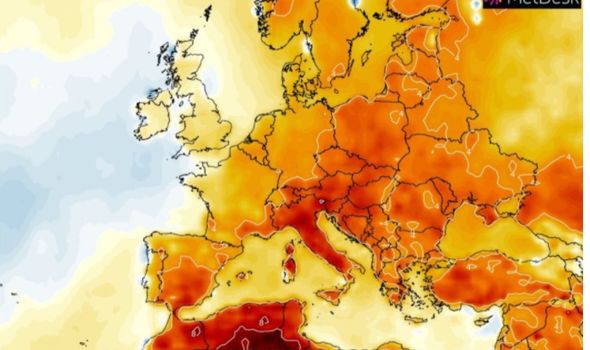 From Monday, July 12, the Met Office long-range forecast predicts a warmer weather pattern for the UK.

The forecast reads: “It looks as if relatively dry, settled and warm conditions may be established at the start of this period, bringing some sunshine for most parts, particular southern and central areas.

“The northwest may still be more changeable with nearer normal temperatures.”

According to maps from WXCharts, the UK may see highs of 24C over this coming weekend, with temperatures rising in time for lockdown restrictions easing. 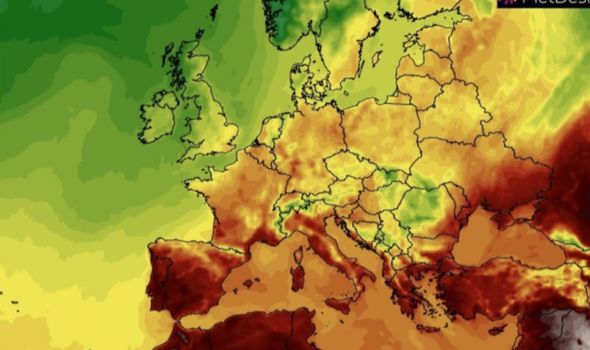 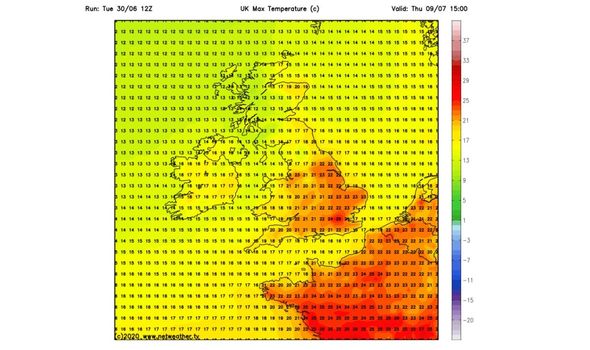 From Saturday, July 4, England’s pubs, restaurants and cinemas will be allowed to reopen as long as social distancing measures can be ensured.

This means beer gardens will once again be open, and Britons can spend time in the sunshine with a pint.

However, Britons have been cautioned to stick to social distancing guidelines after thousands flocked to beaches when hot weather hit in June.

Prime Minister Boris Johnson told Brits to “stop taking too many liberties” ahead of lockdown measures easing this weekend.

DON’T MISS
Aldi special buys: The FIVE Aldi best buys to entertain the kids [INSIGHT]
Tanning advice: How to turn sunburn into a tan – top tips [EXPLAINED]
Why are UV rays harmful? The secret behind sunburn and link to cancer [INSIGHT]

Weather maps show in the first full week of July temperatures will continue to rise across the country, with up to 26C possible in London by Friday, July 10.

There could be interludes of both sunny and rainy conditions, with a “very windy wet spell” forecast at the end of this week.

The Met Office long-range forecast states: “The best of any drier, brighter weather more likely across the south and east of the UK.” 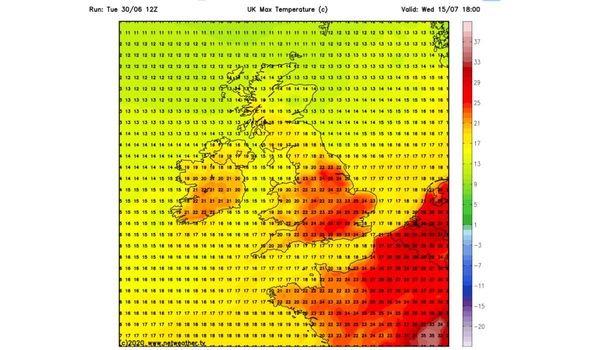 However, it is the second week of July which will see improvement, with “signs that the weather may become drier, more settled and warmer again.”

Netweather maps forecast 27C in the south of England on July 14, with maps turning red with heat that week.

Forecasts from Met Check also predict hot weather in July, as despite “a mixed start to the month” the middle of the month will see “high pressure starting to become more dominant”.

This means conditions will turn “warm across many parts of Central and Southern areas with hot weather possible for parts of England.”

These areas of high pressure are forecast to push away any low pressure, bringing highs again to the UK.

A forecast for the month ahead from Met Check reads: “A mixed start to the month is expected with low pressure continuing to dominate the weather and somewhat cool for Northern and Northwestern areas.

“An improving picture for the middle of the month with high pressure starting to become more dominant and turning warm across many parts of Central and Southern areas with hot weather possible for parts of England.

“Turning thundery later in the month as low pressure tries to move in once again from the West with plumes approaching from the South.”