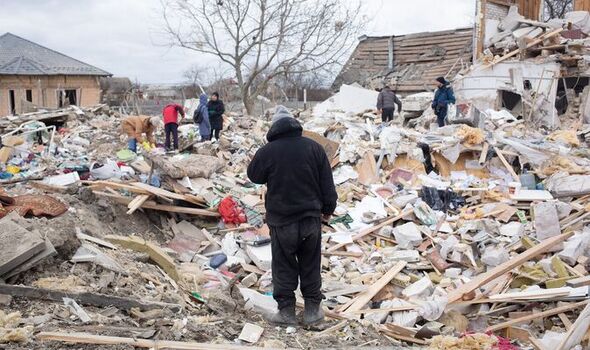 Little Semyon was left fighting for his life alongside his older sister Sofia, 13, who is understood to be unconscious in intensive care. Parents Anton Kudrin and Svetlana Zapadynskaya, who were both vets, died alongside their middle daughter Polina, 10, last Saturday. Semyon died at Kyiv’s Okhmatdyt Children’s Hospital on Wednesday, a family friend said, where Sofia remains unconscious and in a critical condition.

A photo taken earlier this week showed a relative at Semyon’s bedside holding his hand while a ventilator helped keep him alive.

Vladimir Bondarenko, the deputy mayor of Kyiv, had shared a photograph of a pink-haired Polina earlier this week. Mr Bondarenko said: “Her name was Polina. She studied in the 4th grade of school in Kyiv.”

Ukraine’s President Volodymyr Zelensky said on Monday that 16 children had been killed because of Russia’s invasion, although the figure is likely to be higher.

An unnamed six-year-old, dubbed the girl in the pink unicorn pyjamas, was among the children killed when Russian troops bombed her apartment block in Mariupol, south-east Ukraine, on Sunday.

A doctor in blue medical scrubs had turned to a press photographer while trying to save her and said: “Show this to Putin: The eyes of this child, and crying doctors.”

A 16-year-old called Iliya was killed as he played football near a school in Mariupol.

Another boy died when a block of flats was hit by bombs in Chuhuiv, a small town outside Ukraine’s second city Kharkiv earlier this week.

Public backing Ukraine to join NATO and the European Union

MOST Britons would support Ukraine joining Nato and the EU, a poll has revealed. Only one in 10 would oppose the besieged nation becoming part of the North Atlantic alliance, which is committed to defend its member states, an Ipsos online poll found.

Four in 10 think Boris Johnson’s suggestion of 200,000 Ukrainian refugees being eligible to come to the UK is “about right”. And a further one in five (21 percent)

believe it is too few, with a similar proportion (22 percent) saying it is too many.

Britons also want to make it easier for Ukrainians to come to Britain, with just 1 in 10 in opposition. At least 60 percent of the 1,020 adults polled said the UK should remove all barriers to their entry.

A majority of 57 percent of 18-75 yearolds quizzed backed Ukraine joining the EU. Kelly Beaver, Ipsos UK CEO said: “Britons want to provide support to the Ukrainian people and nation, by backing their entry to Nato and the EU.”

There is also widespread support for the actions of Fifa and Uefa to suspend Russian clubs and national teams from competitions.

Nearly eight in 10 (78 percent) said it was the right thing to do after Russia’s invasion.