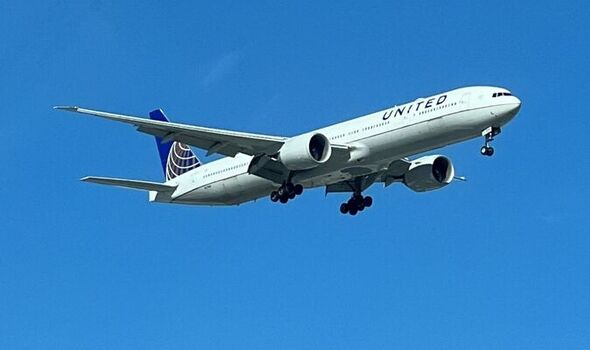 The UA47 Boeing 777-224 was set to fly from Frankfurt, Germany, to Houston, Texas at 2:11pm local time. However, 13 minutes into its flight the plane signalled it had an emergency and squawked 7700.

After reaching the UK’s airspace, the UA47 turned around and flew back to Europe over the North Sea.

Images from Flightradar24 showed it then held over the North Sera to “reduce fuel weight before returning to Frankfurt”.

According to the flight tracker, the aircraft “is returning to Frankfurt due to a technical issue”.

Speaking to Flightradar24, Captain Ken Hoke explained “squawking 7700” is a way of declaring an emergency, and is based on the emergency code to air traffic control facilities.

Cpt Hoke, a Boeing 757/767 captain for a package express airline and also AeroSavvy website contributor, told the website: “If a crew resets their transponder to the emergency code of 7700 (squawking 7700), all air traffic control facilities in the area are immediately alerted that the aircraft has an emergency situation.

“It’s up to the crew to let ATC know what the exact situation is. It may be an aircraft problem, medical issue, or something else.

“In some cases, a crew may not elect to change their transponder to 7700 (it’s not required). If I’m talking to Chicago Approach and have a problem, I’ll tell them the problem, declare an emergency over the radio and get vectors to land immediately.

“In an international environment where language and communication may be challenging, squawking 7700 makes it very clear to ATC that the crew needs priority and assistance.”