A spokesperson for the New York Police Department told said that 10 demonstrators were detained on Thursday. Footage of the evening showed protesters chanting “All cops are bastards” as they marched through the streets of Manhattan.

One Twitter user denounced on the social media platform that “Strategic Response Group officers display hostile conduct against a New York City elected official at what was a peaceful march through West Village until a massive police force conducted random arrests”.

Another user added: “NYPD trying to send a message these past two nights: They will be just as brutally no matter how people vote, and they know that no politician will hold them accountable.”

However, others countered the claims saying it was demonstrators who instigated the violence.

One person said: “I’m seeing people out their hands on police. 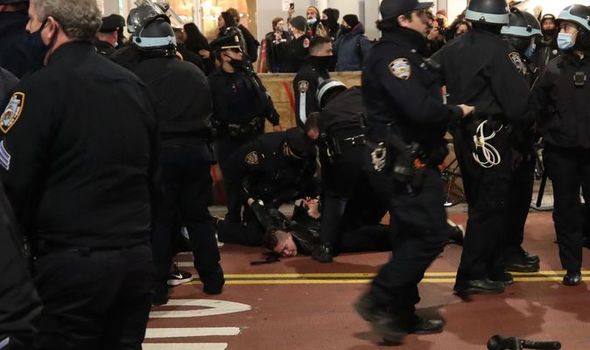 “A girl spitting on a police officer. I would say it’s the other way around.

“Violent protesters with hostile conduct & police arrest them. As they should.”

On Wednesday night, a video showed an enraged woman spitting in a NYPD sergeant’s face during the march in Manhattan.

The demonstrator was charged with obstruction of governmental administration, violation of local law and harassment.