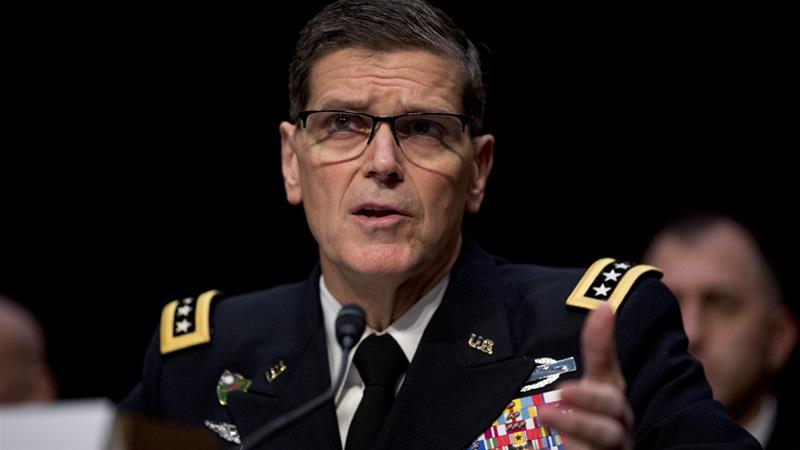 The top commander of US forces in the Middle East, General Joseph Votel, told a Senate committee on Tuesday that he was not asked for his advice about a withdrawal of US troops from Syria before President Donald Trump announced his decision.

“I was not consulted,” the general said.

US officials told Reuters that the military has already started the withdrawal process, adding hundreds of troops to Syria to facilitate a safe pullout.

It has begun to withdraw equipment from Syria and is expected to begin the drawdown of personnel soon.

Trump’s December decision to leave Syria shocked US allies and led to the resignations of Secretary of Defense James Mattis and Brett McGurk, the top envoy to the coalition fighting the Islamic State of Iraq and the Levant (ISIL, also known as ISIS) group.

Trump initially said the withdrawal would be rapid but the pace has slowed as military officials work out the logistics.

Votel said that of the 88,000 square kilometres of territory that ISIL once held, it now controls less than 52 square km.

“It is important to understand that even though this territory has been reclaimed, the fight against ISIL and violent extremists is not over and our mission has not changed,” he said.

Votel said that there are now between 1,000 and 1,500 ISIL fighters in the small area they still control in the southern part of the Euphrates River Valley near the Iraqi border.

The remainder, he said, have “dispersed” and “gone to ground,” suggesting they still have the potential to return.

Trump said in a weekend interview that ISIL is “almost knocked out.”

The withdrawal will fulfil Trump’s goal of bringing US troops home from Syria, but military leaders have pushed back for months, arguing that ISIL remains a threat and could regroup.

A Defense Department watchdog report released Monday warned of just such a possibility, saying that ISIL “remains a potent force of battle-hardened and well-disciplined fighters that ‘could likely resurge in Syria’ absent continued counterterrorism pressure,” the report from the inspector general said.

Trump’s Syria withdrawal has also fueled rare, vocal opposition from within his own Republican party.

The Republican-led US Senate on Monday backed largely symbolic legislation that broke with Trump by opposing plans for any abrupt withdrawal of troops from Syria and Afghanistan.

It warned that “a precipitous withdrawal” could destabilize the region and create a vacuum that could be filled by Iran or Russia.

“The coalition’s hard-won battlefield gains can only be secured by maintaining a vigilant offensive against the now largely dispersed and disaggregated ISIL that retains leaders, fighters, facilitators, resources and the profane ideology that fuels their efforts,” Votel said.