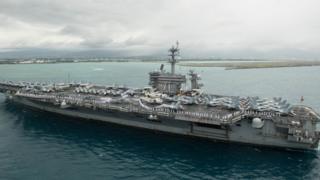 A sailor who was serving aboard the USS Theodore Roosevelt aircraft carrier has become the first on the ship to die from Covid-19, the US Navy announced.

The sailor was moved to an isolation house on Guam after testing positive, where he was found unresponsive on 9 April and died on 13 April.

Over 500 sailors on the USS Roosevelt have tested positive for the virus.

The ship’s captain was fired this month after his letter pleading for help with the outbreak was leaked to US media.

The USS Theodore Roosevelt is currently stationed in Guam, with sailors quarantining ashore. The name of the sailor who died has been withheld by the Navy until the family is notified.

According to a statement by the Navy, the sailor tested positive for the virus on 30 March and was isolated at the naval base with four others.

He received twice-daily medical checks and was found unresponsive on Thursday morning. Fellow sailors administered CPR and the sailor was transferred to the navy hospital.

On 30 March, the vessel’s captain, Brett Crozier, sent a letter to defence officials begging for assistance with the outbreak on board, saying the spread was “accelerating” and it was impossible to contain in the ship’s cramped quarters.

His subsequent firing provoked a public outcry and led to the resignation of acting Navy secretary Thomas Modly.

Mr Modly said he removed Capt Crozier for allegedly leaking the letter and creating “the impression the Navy was not responding”, claiming that the captain’s actions were “naive” and “stupid”.

He apologised before resigning.

Related posts:
Recent Posts
Latest Posts
Judge orders Eric Trump to testify in New York probe before election
Warehouse worker, 23, crushed to death under running forklift in horror accident
Asda to crack down on shoppers without face masks
JPMorgan set to pay $1 billion in spoofing penalty – Bloomberg News
Beyond TikTok, Walmart Looks to Transform
This website uses cookies to improve your user experience and to provide you with advertisements that are relevant to your interests. By continuing to browse the site you are agreeing to our use of cookies.Ok