Rights groups say 10 journalists have been detained and more than two dozen threatened due to work on the pandemic. 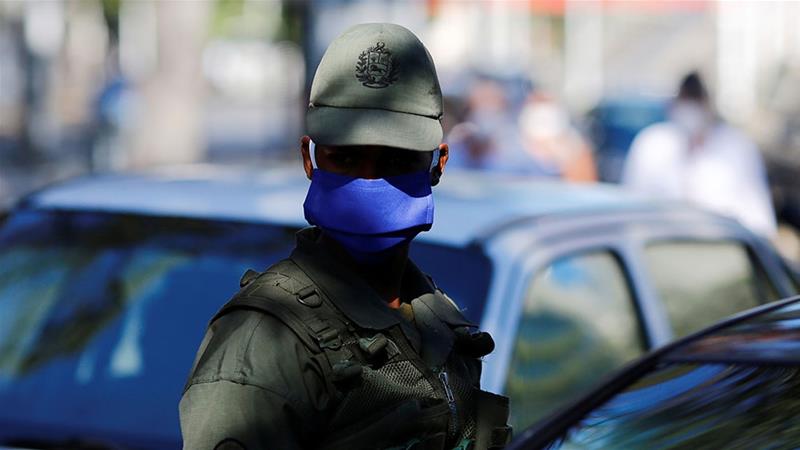 When Venezuelan photojournalist Rosali Hernandez started taking pictures of COVID-19 patients in one of the main hospitals of Caracas last month, she was met by a member of the armed forces.

“He asked me to give him my telephone and camera. When I refused, he forced me to erase all of my materials, including the photographs I had taken before entering the hospital,” said Hernandez, who works for the online news outlet Caraota Digital.

“Even though I showed him my press credentials, he told me I was not authorised to work in the hospital, and insisted I shouldn’t come back again,” Hernandez said. She added that she was forced to stop working on three different occasions by members of security forces and by national guards.

“In one of the hospitals, the medical staff begged me to erase all of my photographs, saying they were not allowed to share any information with journalists and that they feared for their security.”

Hernandez is not alone. More than 35 other journalists and media outlets have been victims of smear campaigns, lawsuits, threats, persecution and confiscation of their equipment, preventing them from reporting on COVID-19, according to Redes Ayuda, a Venezuelan NGO specialised in defending press freedom. At least 10 journalists have been arbitrarily arrested while covering coronavirus-related stories since March 13, when the first case of the virus in Venezuela was confirmed, according to the US-based Committee to Protect Journalists (CPJ). Redes Ayuda puts the number of detentions at 17.

The apparent crackdown on journalists comes as Venezuelans seek more information regarding the pandemic. Venezuela has confirmed at least 345 cases of COVID-19 and 10 deaths, but experts fear the number may be much higher. Doctors and other healthcare professionals have repeatedly warned the country’s healthcare system, which has faced medicine and equipment shortages for years, is ill-equipped to handle a surge in cases.

“In Venezuela, the COVID-19 pandemic has only provided more excuses for the government to repress and censor critical media, in what was already one of the most challenging countries for the press in Latin America,” said Natalie Southwick, the South and Central America programme coordinator for CPJ.

“At a critical moment like this, the free flow of reliable information can spell the difference between life and death for many people, and a free press is vital to ensuring that information is able to reach those who need it,” Southwick told Al Jazeera. Press organisations like Reporters Without Borders say that the climate for journalists has been extremely tense since the onset of the political crisis in 2016, and has further intensified since 2017, resulting in numerous arbitrary arrests and violence against journalists. Many Venezuelan journalists have fled the country in recent years due to the ongoing dangers and threats.

Rights groups also warn that some of the laws in place are used as a tool for the government to arbitrarily arrest or prosecute independent journalists. These include a 2010 law sanctioning any content “calling the legitimately constituted authority into question”, as well as a 2017 law on “advocacy of hatred”, prosecuting and imprisoning anyone who “instigates hate or violence on the radio, television, in print or via social media.” Local press NGOs like Redes Ayuda warn that “this is a tailor-made law to justify any type of imprisonment for expressing one’s opinions”.

Darvinson Rojas, a freelance journalist, said special action forces arrested him on March 21 because he was “covering recent numbers of confirmed coronavirus cases”.

“They acted violently, tied my hands with my shoelaces and covered my face with the T-shirt I was wearing,” Rojas told Al Jazeera.

“They arrived at my home at night, saying they had received an anonymous phone call indicating there was a person infected with COVID-19 in my house. When I tried to go outside to take a picture, the special forces arrested me. Then, they forcibly entered the house, and stole four computers, two cellphones and an iPad. They have threatened and harassed the neighbours who tried to intervene. Several people were hit during this incident,” Rojas said.

Rojas was arrested with his parents, who were released that same day. He was subsequently detained at police headquarters for 12 days and released conditionally on April 2.

He is charged with “advocacy of hatred’ and “instigation to commit crimes” for his reporting, and is currently awaiting criminal investigation. Human rights and press organisations warn that the trial is unlawful and politically motivated, aiming to discourage other journalists from reporting on the pandemic. 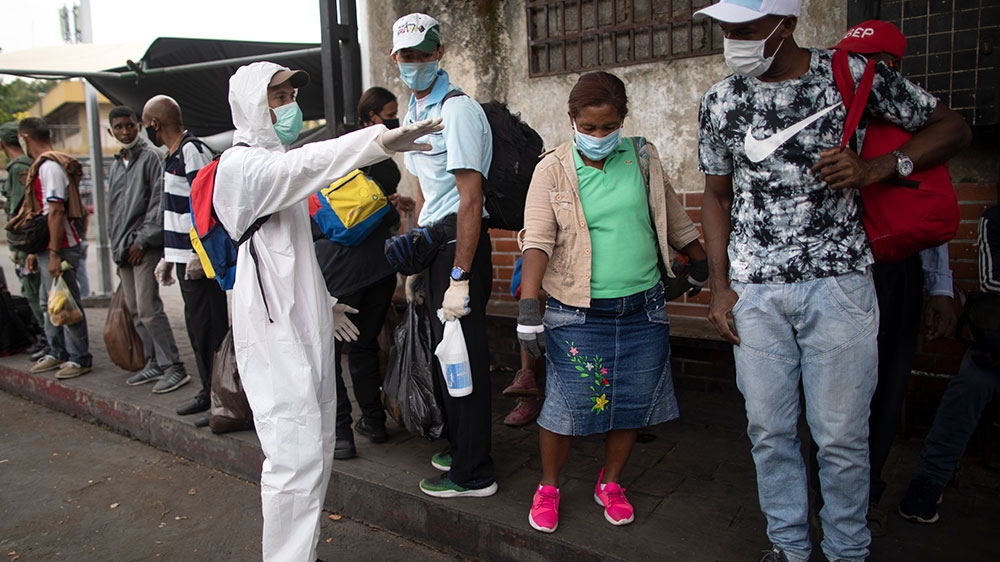 Venezuelan ministries for communication, interior relations, justice and peace have not responded to Al Jazeera’s requests for comment.

Vladimir Padrino Lopez, the Venezuelan minister of defence for the national armed forces, said in March that journalists are encouraged to carry out their work during the quarantine.

“Of course, there are sectors that are exempt from this decree, such as the agriculture sector, for food production; the health sector and all the health workers who need to go to health centres and hospitals; the public transport sector; the pharmaceutical sector, essential services: electricity, gas, water; the telecommunications sector; the media sector,” he said, referring to the nationwide quarantine. “These are sectors that are exempt from this measure and may circulate, in the morning to go to work, and in the afternoon to go back home.”

But rights groups say that is not necessarily the case.

Luis Serrano, the general coordinator of Redes Ayuda, told Al Jazeera that if journalists are not allowed to report, “the government is violating not only their right to work, but also the right of the people to be informed, which is essential to understand the magnitude of the pandemic”.

He added that “this censorship is part of a systematic policy of control over the population, controlling everything in people’s lives – from the information they receive to the food that they eat – which generates a population that is used to dictatorship”. 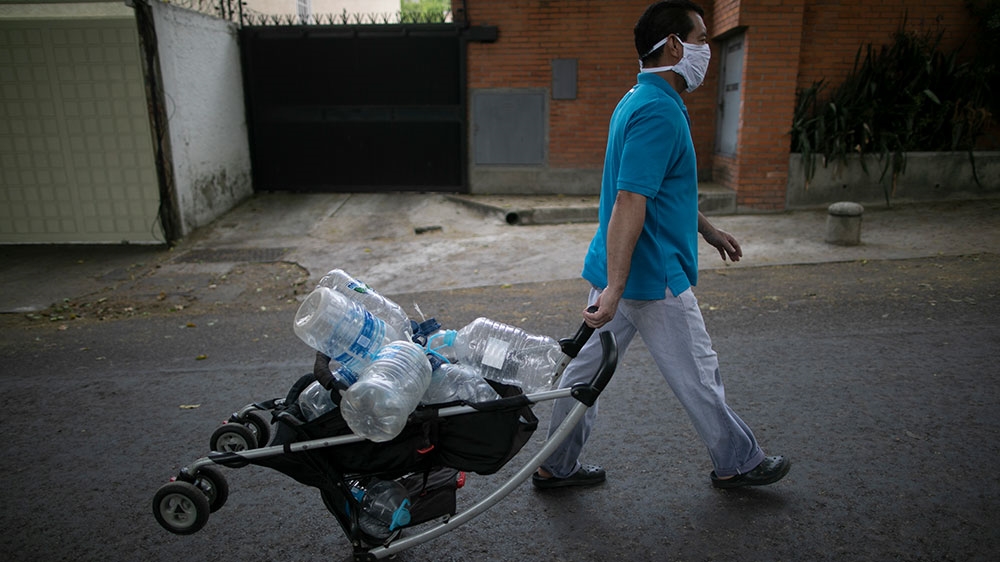 Serrano said he was briefly detained on April 6, while he was receiving a delivery of masks, gloves and hand sanitiser on behalf of Redes Ayuda, which was putting together protection kits for Venezuelan journalists. Serrano told Al Jazeera that police officers had searched him because they wanted to check that he was not an “illegal seller”. When he objected, they forcibly transported him to the police station, where he was handcuffed and interrogated for about two hours. He was subsequently released.

For Hernandez, she worries what the crackdown on the press may mean for not just Venezuelans, but the region as a whole.

“Venezuelan people have no idea about what is happening in the country,” she said. “All of this is very dangerous, not only for Venezuela but also for surrounding countries.”