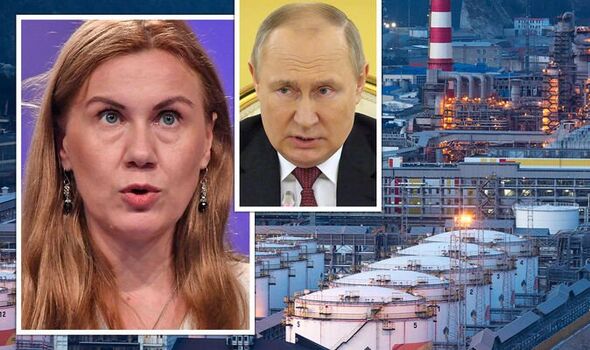 Speaking at the International Energy Agency (IEA) summit in Denmark, Kadri Simson warned that if member states did not make energy savings, “we will not make it”. It comes amid concerns that EU states are struggling to agree on fresh sanctions against Russia. Nations such as Germany and Italy, among others, have been accused of watering down previous rounds of sanctions to avoid a greater detrimental impact to their economy.

The EU announced plans in May to reduce their dependence on Russian fossil fuels to zero by 2030. At the outset of the invasion, the EU relied on Russia for around 40 percent of its natural gas supply.

However, some member states – such as Germany and several Balkan countries – rely heavily on Russian gas and oil, more so than others.

Dan Jorgensen, Demark’s climate and energy minister, hinted that EU colleagues may be pulling in different directions on energy policy.

Asked about the challenges facing the move away from Russian energy, Ms Simons said: “There are some risks that we see that will hold us back. One of them is our greed, our electricity greed.

She added: “The other one is supply chain; all those equipments [sic] that you do need developed for cleaner solutions are not coming from third countries, but partially can come from ourselves.”

The top European Commission figure suggested that regulation and bureaucracy was getting in the way of producing more internal renewable energy.

Ms Simson said that “the third challenge is permitting. It is a nice vision that we will build six times more offshore wind farms in the next seven years, but permitting is something that we have to take care of.”

In a report released yesterday (Wednesday), the IEA estimated that energy efficient policies – promoting energy-saving measures such as heat pumps and insulation – could save the world around 30 million barrels of oil a day. That, it said, was three times more than what Russia produced last year.

The IEA predicts that if energy prices were to stay the same, it would reduce costs by just over $1trillion (£796billion).

Meanwhile, it would also save around four times the amount of natural gas the EU imported from Russia in 2021.

He told the conference: “In Europe, the main customer of Russia, we have very difficult days to come.

“I am especially worried about the natural gas markets and this winter. If we have a harsh and long winter we may see very difficult days.”

Ms Simson noted: “We have to take care of the immediate risks, and we do have preparedness plans for this heating season.

“But whatever happens in our closest neighbour – even if Ukraine prevails, we should not end in the same situation that we are so dependent on fossil fuels.

“In the medium term, we have to replace imports with home-brewed renewables, and where we can we have to save [energy].”

She added that energy efficiency policies were a “no-brainer” and a “necessary solution” for the EU, “because we will not find sufficient volumes of alternative gas supplies globally to replace Russian volumes.

She said: “We will not be able to produce so fast sufficient alternative electricity supplies without savings. We will not make it.”

Mr Jorgensen said he had colleagues “saying, ‘well, how can you even think of new regulation now, that we’re in the middle of a crisis, a war in Europe?’”

However, he also claimed that while EU energy policy had previously represented “the lowest common denominator”, though “that may have been true in the past, but that is definitely no longer is.”

Asked which EU member states were holding the bloc back from progress on energy in the face of the Russian threat, Anders Hoffmann, deputy permanent secretary for the Danish energy ministry, gave a diplomatic response.

He told Express.co.uk: “I don’t think there is an official position on that. I think the most important part is that we stay unified, that will be the main message coming from the market. This is a time for unification.”

Queried on whether the sluggish response to the invasion of Ukraine and the energy crisis it has spurred was frustrating for Denmark, he responded: “There’s not a conflict between the energy efficiency agenda and the sanctions.

“I think those two go quite well hand in hand. I mean, we were working on that before [the invasion of Ukraine].”