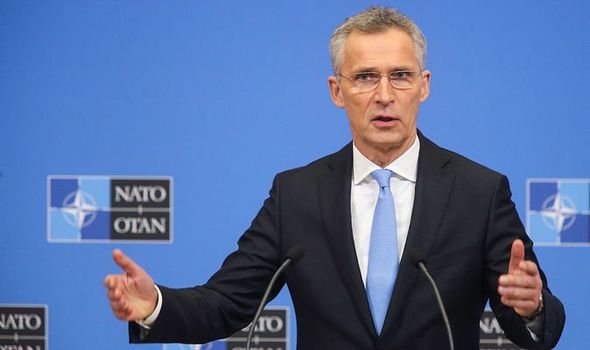 Nato is preparing to sign an “enhanced cyber co-operation” within days to protect Kiev. In a chilling message, hackers told Ukrainians: “Be afraid and expect the worst. All your personal data has been uploaded onto the public internet. This is for your past, your present and your future.”

It is not yet known who is behind the attacks, but Ukrainian Foreign Ministry spokesman Oleg Nikolenko noted “there is a long record of Russian cyber assaults against Ukraine”.

The foreign and education ministries were among the sites shut down, along with embassies in the UK, US and Sweden, as well as government services site Diaa, which stores vaccination data.

But Ukrainian security service SBU said no personal data had been leaked.

Meanwhile, the US estimates Russia has now amassed around 100,000 troops close to Ukraine.

But the Kremlin warned that if Nato expands to Ukraine and other former Soviet nations, a “red line” will have been crossed.

US intelligence sources say Russian operatives are preparing for a “false-flag” operation in Ukraine that will involve Kremlin-backed forces attacking separatist rebels to justify a full invasion.

The unit is “trained in urban warfare and in using explosives”, they say.

US national security adviser Jake Sullivan said: “We saw this playbook in 2014. They are preparing [it] again.”