The key to a great sandwich is juxtaposition, and it’s worth getting the balance right. 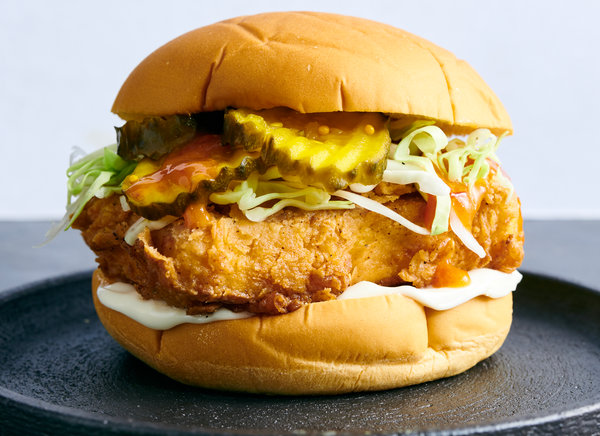 Good morning. I got a good sandwich the other day at the Oak Neck Deli in West Islip, Long Island, N.Y., 50 miles east of the city as the gull flies. They called it a Monte Cristo, but it wasn’t fried: turkey, ham and melted Swiss on a hero roll, with lettuce, sliced red onion and Russian dressing. I liked how the hot cheese contrasted with the cool meats, liked how its softness played off the crisp shredded lettuce.

I ate that sandwich while driving along Ocean Parkway west toward Gilgo Beach and, as I did, resolved to bring more attention to my weekend sandwich making. The goal is juxtaposition, and not just of temperatures: You want spicy against sweet against salty against sour.

And maybe you want a project, too? If you’re interested in playing along, you might consider a recipe I cooked up for the fried-eggplant sandwich served at Defonte’s in Brooklyn, or the one Alexa Weibel adapted for the crispy fried-tofu sandwich (above) from Superiority Burger in Manhattan. Either one makes for an elegant lunch, every flavor and texture distinct. So good.

Perhaps you’re not looking for a project, though. It was project enough just getting through the week. You could keep things simple with chicken teriyaki and this ingenious recipe for miso-butter roasted broccoli on the side. You could whiz up some green dip to serve with chilled sliced vegetables, or roast a chicken to serve alongside watercress and toast.

Somewhat more ambitiously, you could make roasted cauliflower with sweet chermoula and yogurt. Honey adds warmth to the classic spiced-herb Moroccan marinade, which coats deeply roasted cauliflower florets. With the yogurt and a big spray of almonds, it’s a hearty enough dish to serve on its own with flat bread for mopping up. (But if you want to go big, serve it with lamb.)

How about a sheet pan of crispy pork schnitzel this weekend? Or some grilled cheese with apples and apple butter? Kung pao shrimp? And I think it’d be great to make some baked apple-cider doughnuts on Sunday morning, and to pack them warm into a bag to eat outside, somewhere beautiful.

There are thousands more recipes to cook this weekend waiting for you on New York Times Cooking (and you’ll find additional inspiration on TikTok, Instagram and YouTube). Yes, you need a subscription to get the recipes. Subscriptions make this whole thing possible. So if you haven’t done so already, would you consider subscribing today? Thank you.

We are standing by in case you run into problems with the technology. Just write to us at [email protected], and someone will get back to you. If you’d like to say hello, or make a complaint, you can reach me at [email protected] I read every letter sent.

Now, it’s nothing to do with capers or thyme, but, in case you missed it, here’s Alexandra Alter’s riveting profile of Colleen Hoover, the best-selling novelist in America by a country mile. She’s sold more books this year than James Patterson and John Grisham — combined.

It’s time to pre-order Thomas Beller’s “Lost in the Game,” a love letter to basketball. And why is that? The book includes this New Yorker essay of his from 2017, on the pleasures of what he calls the Old Man Game. It’ll leave you wanting more.

Do read this historical survey of the personal essay, by Merve Emre, in The New York Review of Books.

Finally, it’s the 76th birthday of Justin Hayward, the frontman of the British rock group the Moody Blues. Here’s the band performing “Nights in White Satin” on French television in 1968, your weekend soundtrack. I’ll see you on Sunday.