Horrible dreary weather is in store for the next few days according to the latest forecast, with heavy rain and even snow in some areas. If you were awake early enough this morning, you may have spotted bright and sunny skies – however, they didn’t last long. The sunshine and blue skies were quickly replaced with dark threatening clouds and torrential downpours across the country.

People have taken to Twitter to complain about the dark skies this morning.

One person wrote: “#England #weather just gone from bright sunshine to dark clouds and pouring rain in half an hour.”

And a third added: “This morning went from sun to clouds to rain in an hour”. 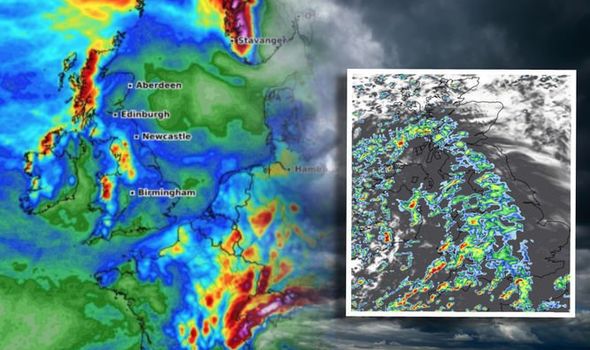 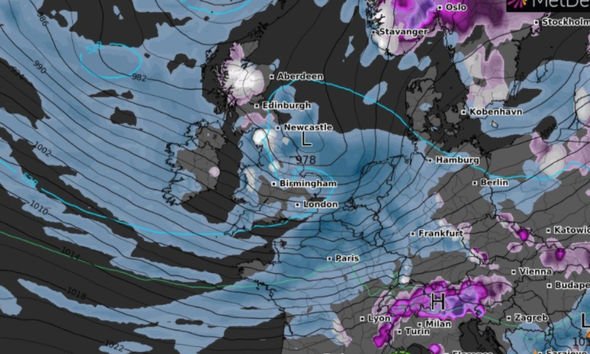 So why is the sky so dark? The rain clouds, continuing torrential rain and even thunder are to blame.

Downpours are expected to continue into the weekend, with the possibility of these turning into snow across the north.

The Met Office tweeted: “It’s a showery start to Friday morning, with the showers banding to give some longer spells of #rain across England and Wales at first.

“In the north the showers will bring some #snow to higher ground.”

You may glimpse some brighter patched between rain showers, however Netweather forecasters warn the rain will return and be “locally heavy”. 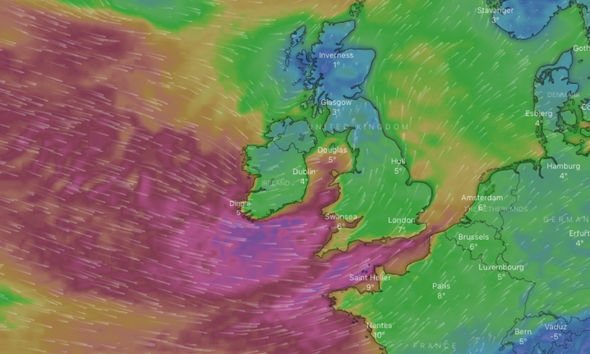 Britons may also experience “hail and the odd rumble of thunder while falling as snow over northern hills.”

Towards the afternoon these showers may ease across the east, however, the west will continue to see downpours.

While the wind has forecast has not called for more Met Office weather warnings, there will be “a brisk westerly wind today, making it feel on the chilly side.”

Maps from Netweather, Windy and WXCharts show the showers lingering across the UK today, with dense patches where torrential rain will hit.

The worst of the rainfall looks to be in Wales, the north west and parts of Scotland.

Maps also show snow across the north of England and Scotland, with flurries expected over hilltops today.

Over the weekend, rain should have cleared to the east by Saturday morning – however areas across northern England and south east Scotland will see rain and hill snow. 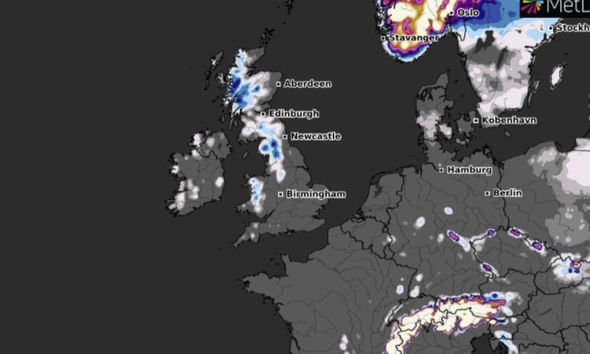 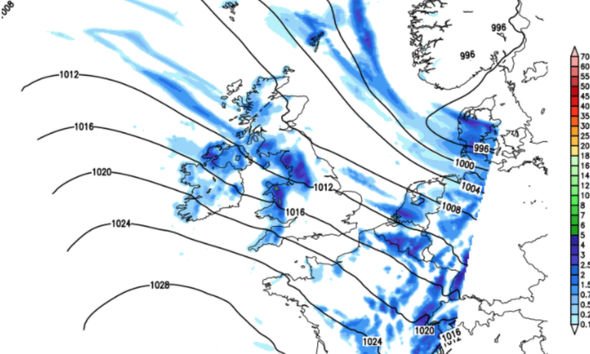 Most of the UK will see a mixture of sunshine and showers on Saturday, will hail and snow in northern areas.

Sunday again will have a dry and bright start but will see long spell of rain across the west.

This will then spread across to south east England and Wales, with temperatures staying around 8C to 11C widely.

Bands of showers, some heavy with hail, moving eastwards this morning, else sunny spells and scattered showers, mainly in the north and west. Showers falling as snow over northern hills.

Showers in the west soon merging into longer spells of rain moving east overnight, with some snow over northern hills.

Very windy in the far south-west. Frost in far north.

Early rain and hill snow over northern England soon clearing, then a rather cold and breezy day with sunny spells and scattered showers, wintry over some hills.

Outlook for Sunday to Tuesday

Continuing changeable with rain or showers for many, but also some dry weather with sunny spells. Strong winds will ease and it will gradually become milder.