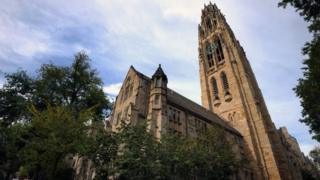 The US government says Yale University is illegally discriminating against white and Asian-American applicants.

The results of a two-year investigation by the Department of Justice found the Ivy League university had breached civil rights law in its undergraduate admissions process.

The department threatened to file a lawsuit against the university if it failed to take “remedial” measures.

A Yale spokeswoman said the university “categorically” denied the accusations.

President Donald Trump’s administration has been a strong opponent of so-called affirmative action.

The programmes, which were supported by former President Barack Obama, seek to boost admissions of under-represented minorities, particularly Hispanics and African-Americans..

The Department of Justice’s report, published on Thursday, said that while the Supreme Court allows universities that receive taxpayer funding to use race as “one of a number of factors” during admissions, “Yale’s use of race is anything but limited”.

“Yale uses race at multiple steps of its admissions process resulting in a multiplied effect of race on an applicant’s likelihood of admission,” it said.

Yale strongly rejected the report’s conclusions, which it said had been made before the university was able to provide all of the information requested by the Department of Justice.

“Had the Department fully received and fairly weighed this information, it would have concluded that Yale’s practices absolutely comply with decades of Supreme Court precedent,” Yale said in a statement.

The university said it considers a many factors during the admissions process and said it would not change its process “on the basis of such a meritless, hasty accusation.”

Last year, Harvard University was cleared of discrimination against Asian-American applicants by a federal judge following a lawsuit, although the ruling is now being appealed.