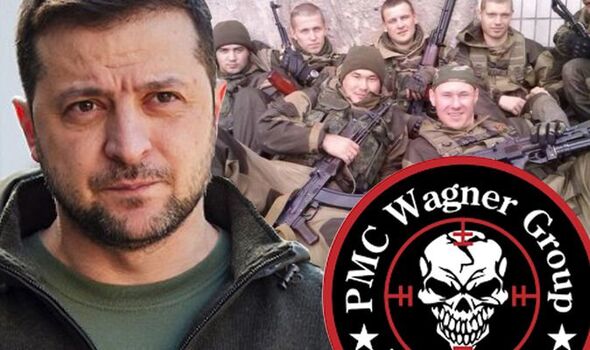 The Swedish producer of Zelensky’s hit TV series, Servant of the People, who speaks to the Ukrainian President most days via the President’s friends on the ground, admits “All Volodymyr’s close friends are extremely worried about him because he’s hiding in a bunker with no idea how to fight or use a weapon. “He wouldn’t know what to do if he came face to face with an assassin. He’s not that kind of man and we’re wondering how he sleeps at night. I speak, via his friends, to Zelensky most days.”

Having worked closely together on his comedy show, Söderlund reveals intimate details of the beleaguered, heroic President’s true reality as more than 400 hardened members of the Russian paramilitary organisation hunt him down.

He said: “If a Chechen or Wagner assassin comes for him, I don’t know what he would do. He doesn’t have a clue how to use a gun. His fight is with words. The courage he’s shown in staying there is absolutely incredible and I constantly ask myself if I would have done the same.”

Söderlund, head of the Stockholm TV agency, met Zelensky six years ago. “He’s very likeable, charming and open-minded, hugely energetic with lots of ideas all the time, and very impatient,” he said.

“When we managed to sell the series to Netflix it was a big breakthrough for Ukrainian productions so he was very happy with that.

“Volodymyr knows how to get people to laugh in amongst the horror, and that’s very uplifting, a remarkable skill. He’s sharp, fast and funny. Putin hasn’t got a clue how to do things Zelensky can do.

“He’s not a classic actor. What he does in Servant of the People is perfectly fine but as President he’s phenomenal. He was a lawyer before, an educated man, with intellectual depth.”

He said Zelensky isn’t afraid even though he can’t defend himself.

“His incredible ability to communicate is making him strong, he doesn’t need a gun,” he said. “He’s uniting Ukranians and the world against Russia with his message, which is hurting the Russians more than if he had a gun. It will traumatise the Russian nation for many years.

“He is today’s Winston Churchill, addressing the British and EU parliaments, the US Congress, it’s extraordinary.”

Zelensky’s wife, first lady Olena, mother of two, has been sharing her own impassioned messages to 2.6 million followers, but Nicola says her husband forgot to tell her he was running for President. “He told me it slipped his mind. He simply forgot. But they are a team. I think he’s very committed to his family. Recently they all had Covid and it was a very big deal, they were pretty ill and had to be completely isolated.”

He added: “As long as I’ve known him he’s been a patriot, but when he became President he couldn’t even speak Ukrainian! He had to learn his first speech. His native tongue is Russian.”

Zelensky has become the symbol of Ukraine’s fight for freedom, but Nicola says he was depressed and exhausted before the war, at a very low point in his life with approval ratings at 20%.

“Things weren’t going well for him before the war,” he said.

“He was totally drained. His battle against the oligarchs was much harder than he’d ever imagined. He had a very rough time, so this is his second big fight. He’s a Jew but he never made it a calling. I didn’t even know.”

He admits that Zelesnky is a far better President than he was an actor.

Nicola said: “He’s more of a TV host, and I find it extraordinary that he’s gone from that job to becoming this iconic leader of the world, I didn’t see it coming. We ate and drank together, got close discussing projects. He likes Ukrainian food. I like him a lot, the kind of guy you really want to get to know and work with, intelligent, free spirited and genuine. We also represent another show in his company, The Sugar Daddy, about an old man and young girl who form a strong relationship. She gives him back his appetite for life.”

Nicola, at 1.89m, towers over his much shorter friend, who is around 1.75. And Zelensky may be mesmerising females across the globe with his extraordinary courage and strength, but until his big moment he’d never been a ladies man, according to his close friend.

“He’s never had ladies’ man appeal. He never came over as a ladies man, and it’s awful to watch him ageing visibly before our eyes, looking more and more tired. He’s aged 10 years in three weeks.”